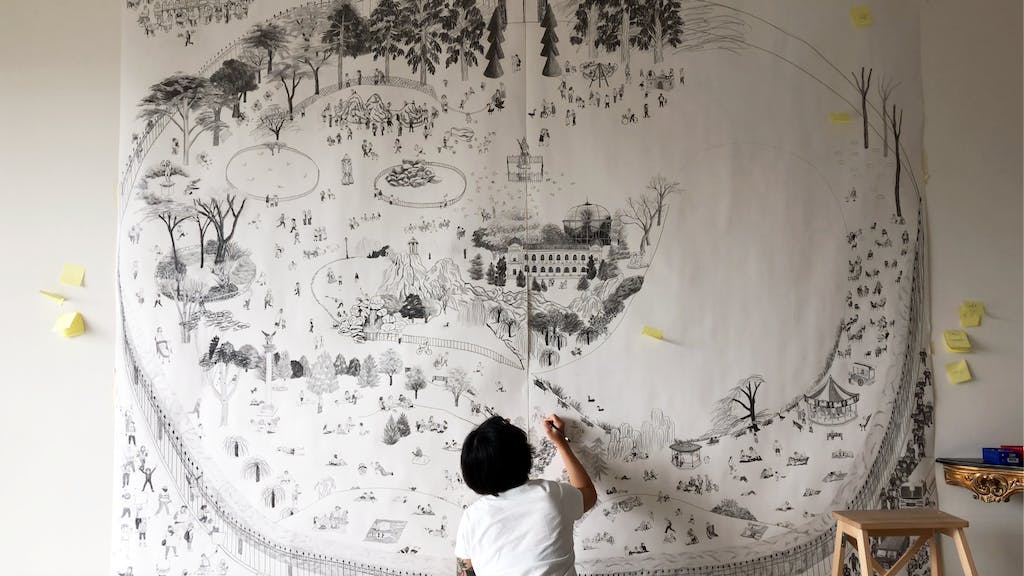 Established in late 2016, Capsule Shanghai is based in Shanghai’s central Xuhui District. Situated on the first floor of a picturesque 1930s garden house in the idyllic greenery of the former French Concession, the gallery works primarily with emerging artists who push the boundaries of contemporary art. The gallery’s special focus is on artists who have personally and professionally migrated between regions, creating unique trans-national and trans-regional links.

From its inception, Capsule Shanghai sought to work with artists from China or artists who have established a professional foothold in the country. The gallery continues to work with emerging contemporary artists destined for the international scene, often presenting their work for the first time in China and abroad, such as Alice Wang, Gao Yuan, Leelee Chan, Feng Chen, Huang Hai-Hsin, Sarah Faux, Ivy Haldeman, Maya Kramer, Cai Zebin, Wang Haiyang and Douglas Rieger. 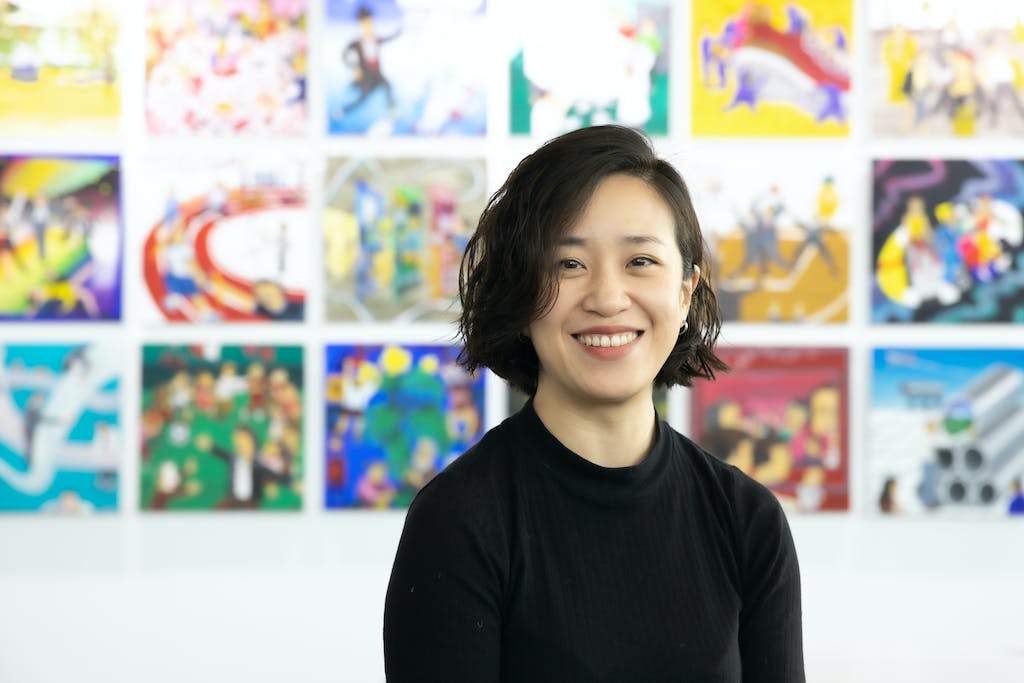 Huang’s work has been collected by multiple private and public collections, including the UBS Art Collection, the YAGEO Foundation (Taipei, Taiwan), the White Rabbit Collection (Sydney, Australia), the Taipei Fine Arts Museum (Taipei, Taiwan) and the National Taiwan Museum (Taichung, Taiwan). She recently was artist in residence at the PILOTENKUECHE (Leipzig, Germany).

Capsule Shanghai is pleased to participate in Paris Internationale with artist Huang Hai-Hsin with her solo project titled PLAYTIME, a reference to the 1967 film set in Paris by Jacques Tati. In PLAYTIME, Huang Hai-Hsin questions the notion of modern playtime in a consumerist, constantly connected society consisting of a cascade of incidents within a larger mundane context yet viewed through critically satirical sentiments. Earnest humor is strewn through the work bordering the line between amusement and unavailing melancholy that situates viewers awkwardly in-between performer and spectator to bear witness to the subversive brilliance of everyday leisure. 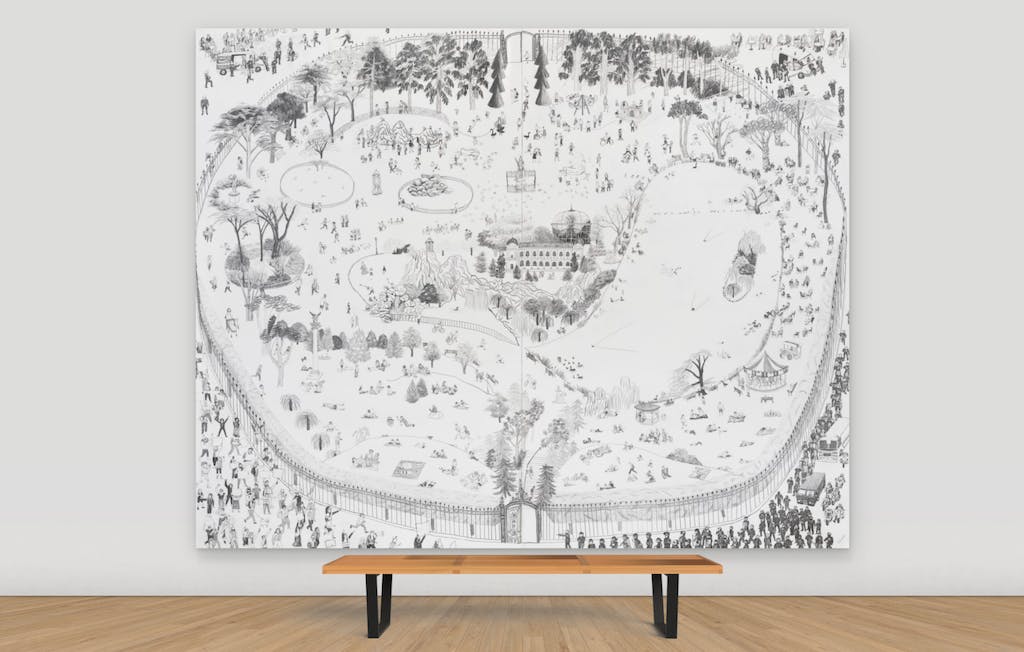 “Taiwanese illustrator Hai-Hsin Huang creates minuscule drawings of mammoth detail. […] The joy of zooming in on her illustrations and noticing multiple figures of different personalities means each time you look at a drawing by Hai-Hsin you’re guaranteed to find something new.”
Burton, Lucy, in: Hai-Hsin Huang’s detailed and delicate illustrations present “the lightness of being”, It’s Nice That, July 20, 2017 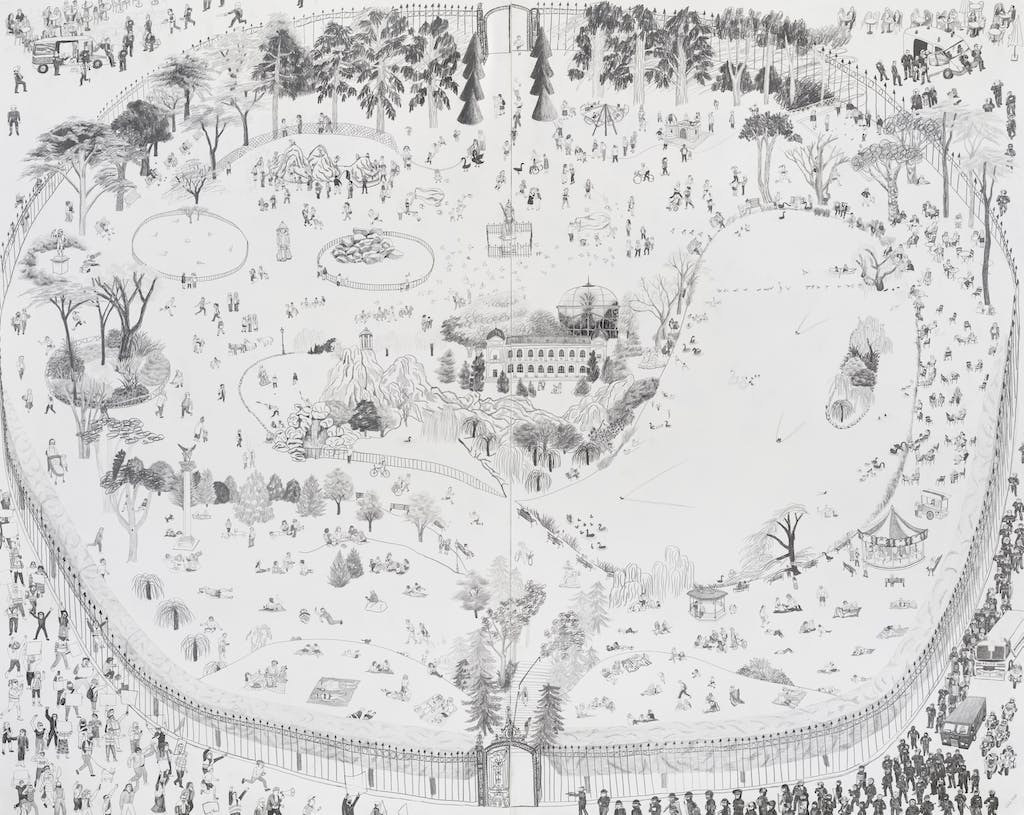 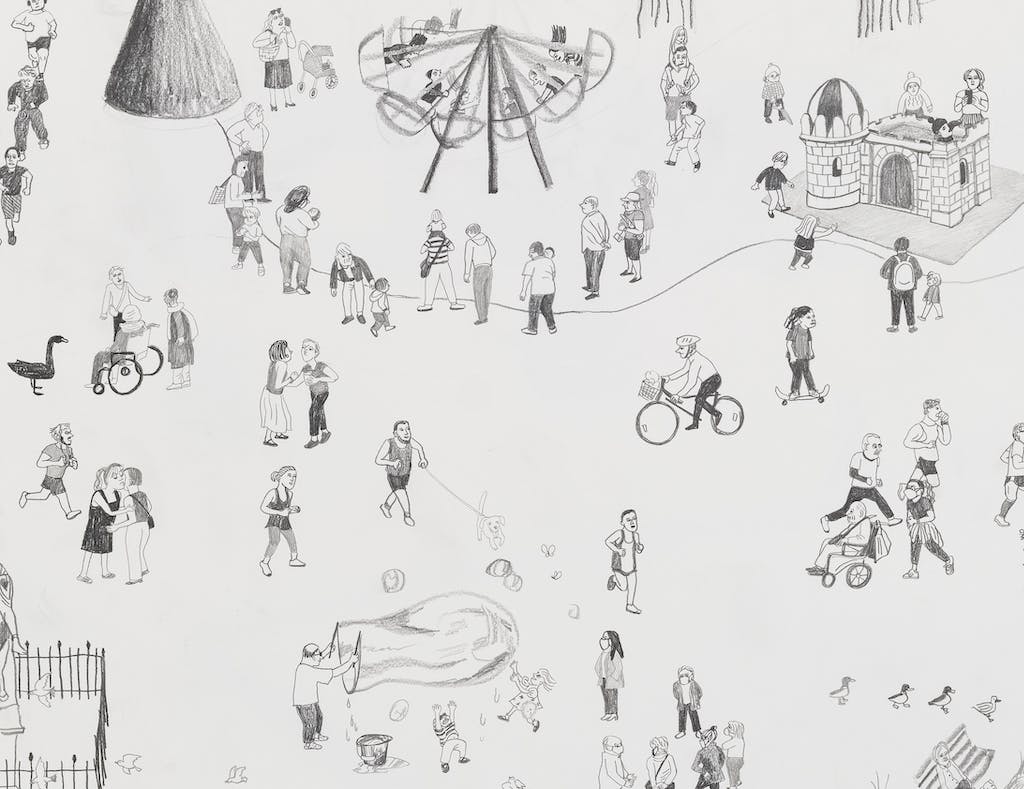 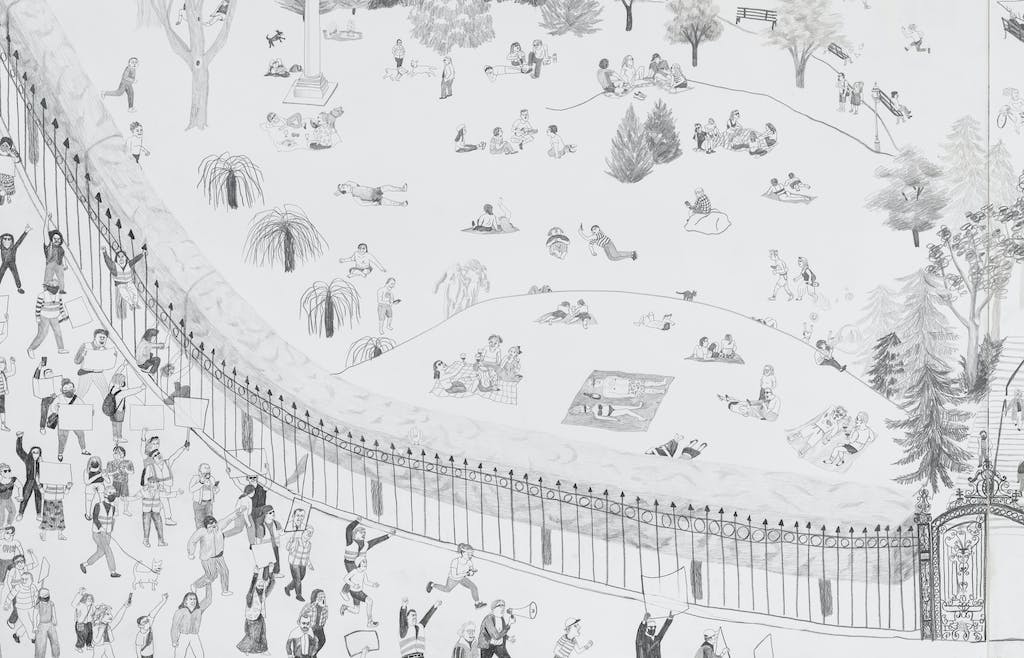 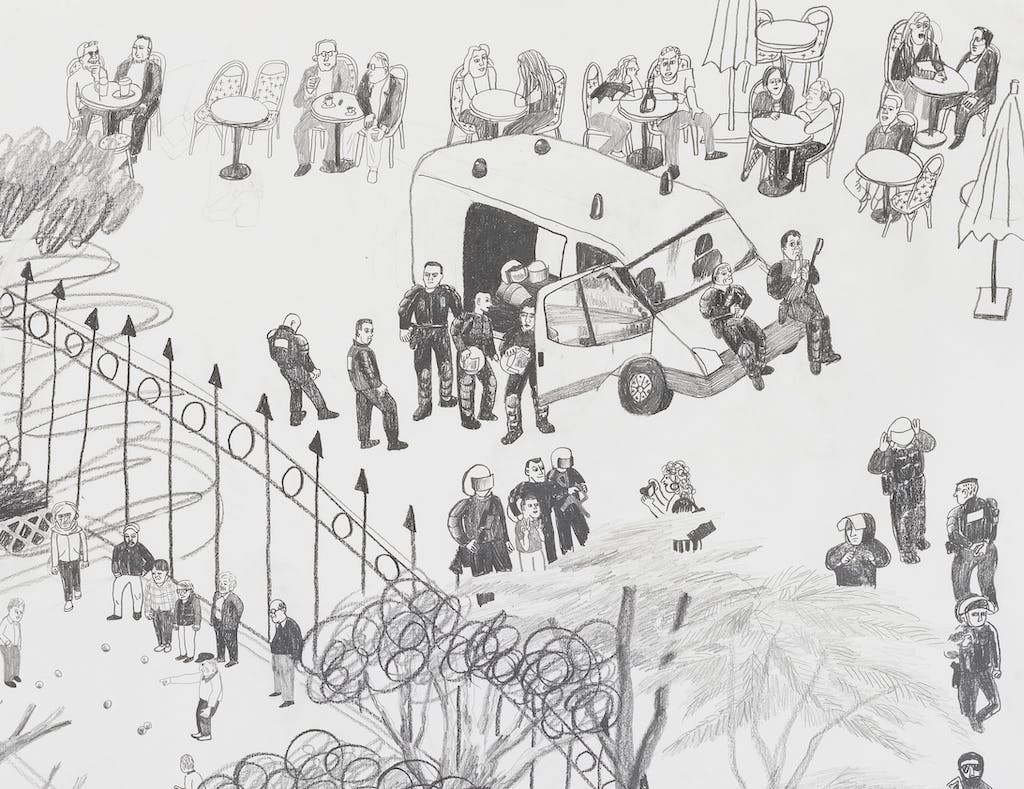 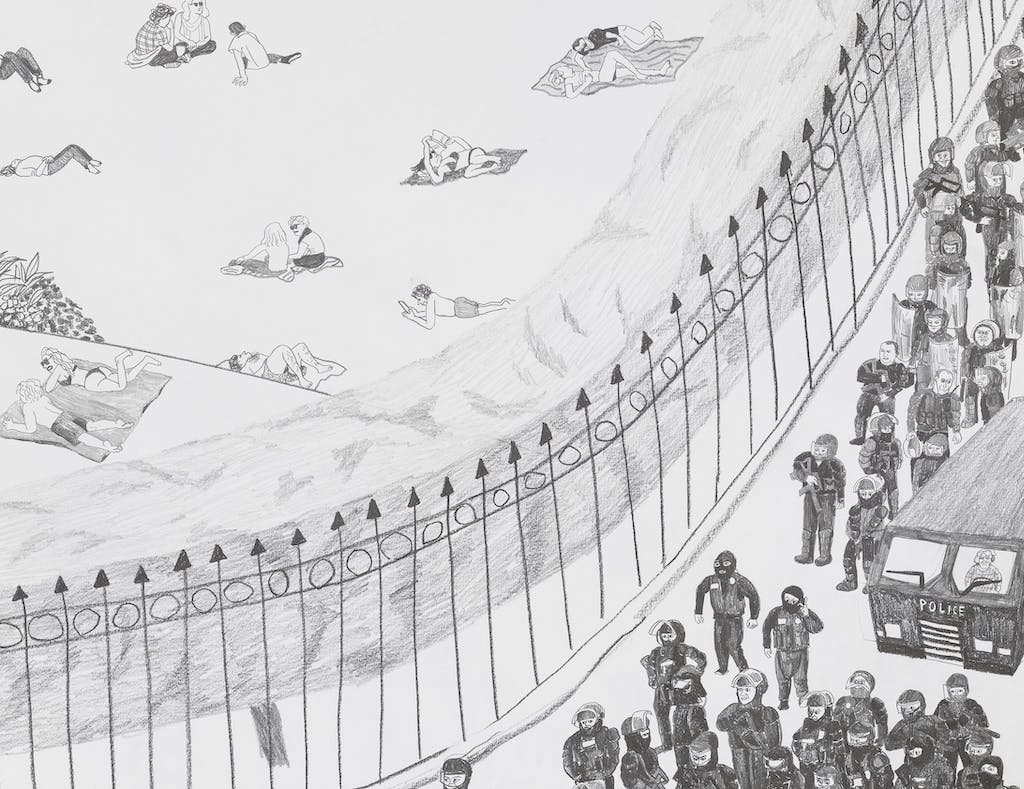 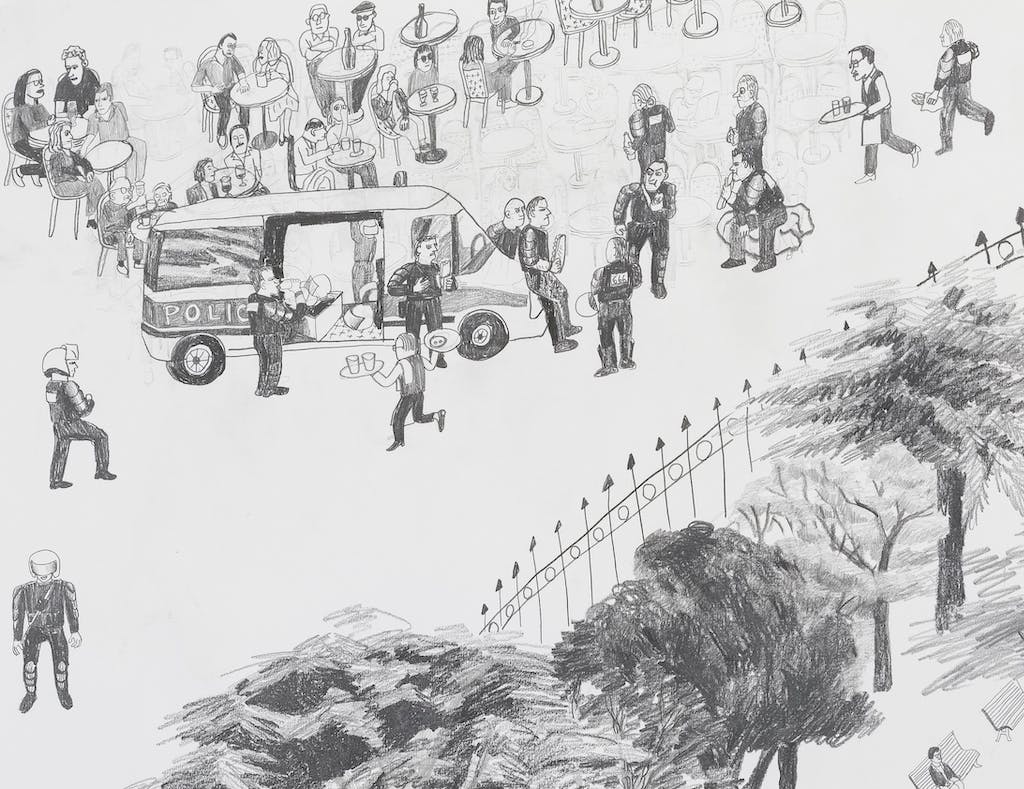 Wielding pencil and paint with a direct sense of urgency and confidence, Huang Hai-Hsin’s renderings of banal life reject centrality and presents life holistically through concurrently zooming inwards and outwards within a grand, theatrical stage in Bosch-esque fashion: beguiling flora dangles overhead, a puppy’s pure geniality frozen in time, a balding man surveys his modest sublime, to a muted scene of dumbfounded spectators naturally drawn to a grey rock while a flock of influencers takes selfies with another.

Human presence continues to be felt nearby at an arm’s reach if not directly within the canvas. Amidst the absurdity, time collapses in the artist’s French Park Drawing as abundant leisure contrasts social activism adjacent the same circular park. The frank, unrestrained depictions of existence act as both critique and acceptance of reality.

With regard to the theme of modern playtime, the motif of the selfie is transformed into an iconic pop culture gesture. The paintings and drawings, created with a sense of momentary temporality, mirrors the fleeting nature of the selfie. Similar to a simple click of a button, Huang Hai-Hsin’s paintings present determination and resolution in the clarity and speed of the brush paralleled by the directness of pencil on paper. Through a series of sketches, drawings, and paintings, Huang Hai-Hsin documents the world unfold before her eyes revealing as much about herself as she is her surroundings.

Perhaps it is the stern gravity Huang Hai-Hsin treats the commonplace or inherent absurdity of contemporary life that contrasts the unsullied colors and elements of satire in the boundless possibilities in looking, strolling, gazing, participating, observing, drawing, thinking, and experiencing. 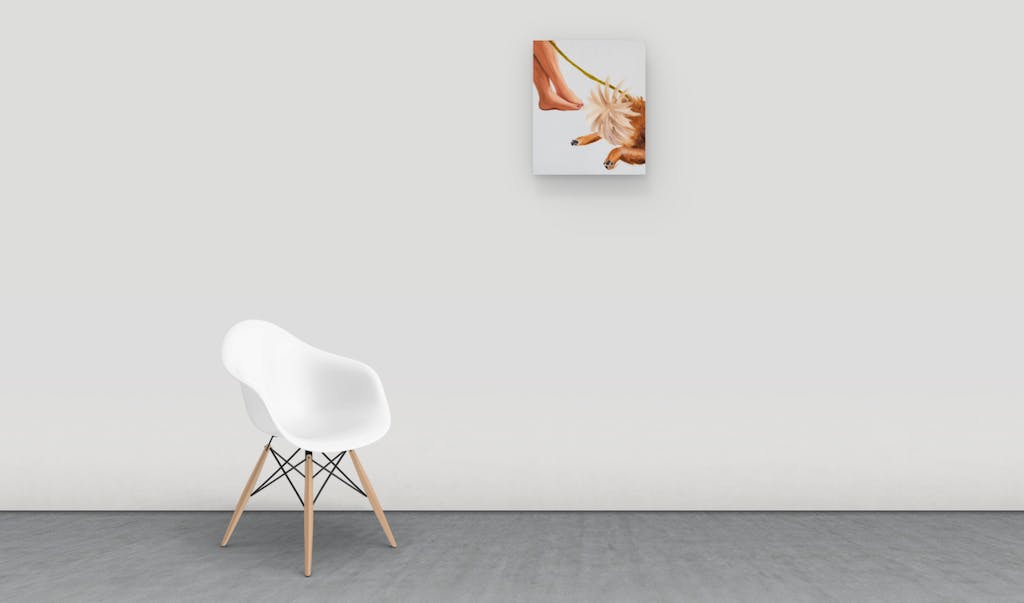 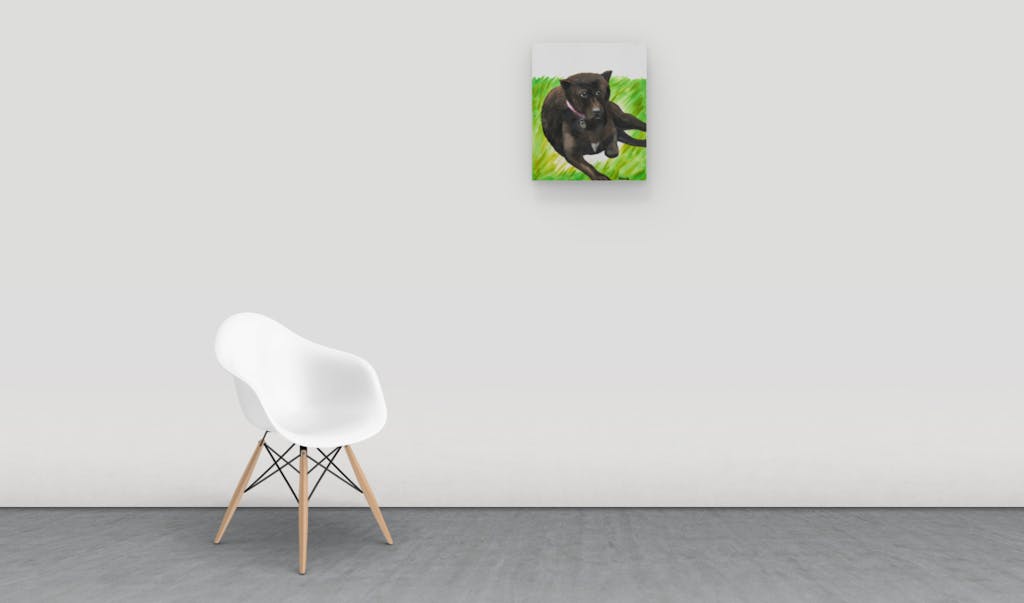 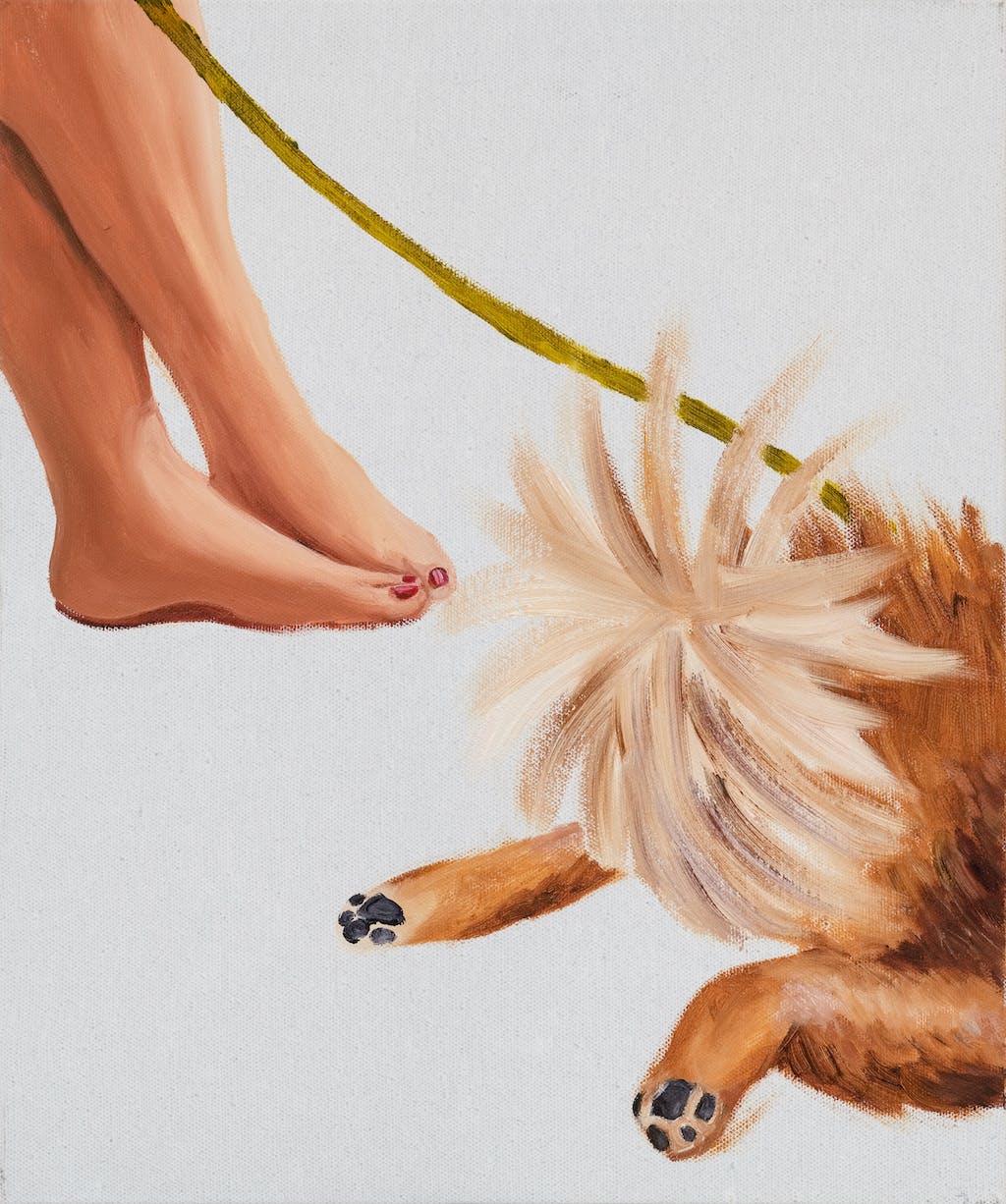 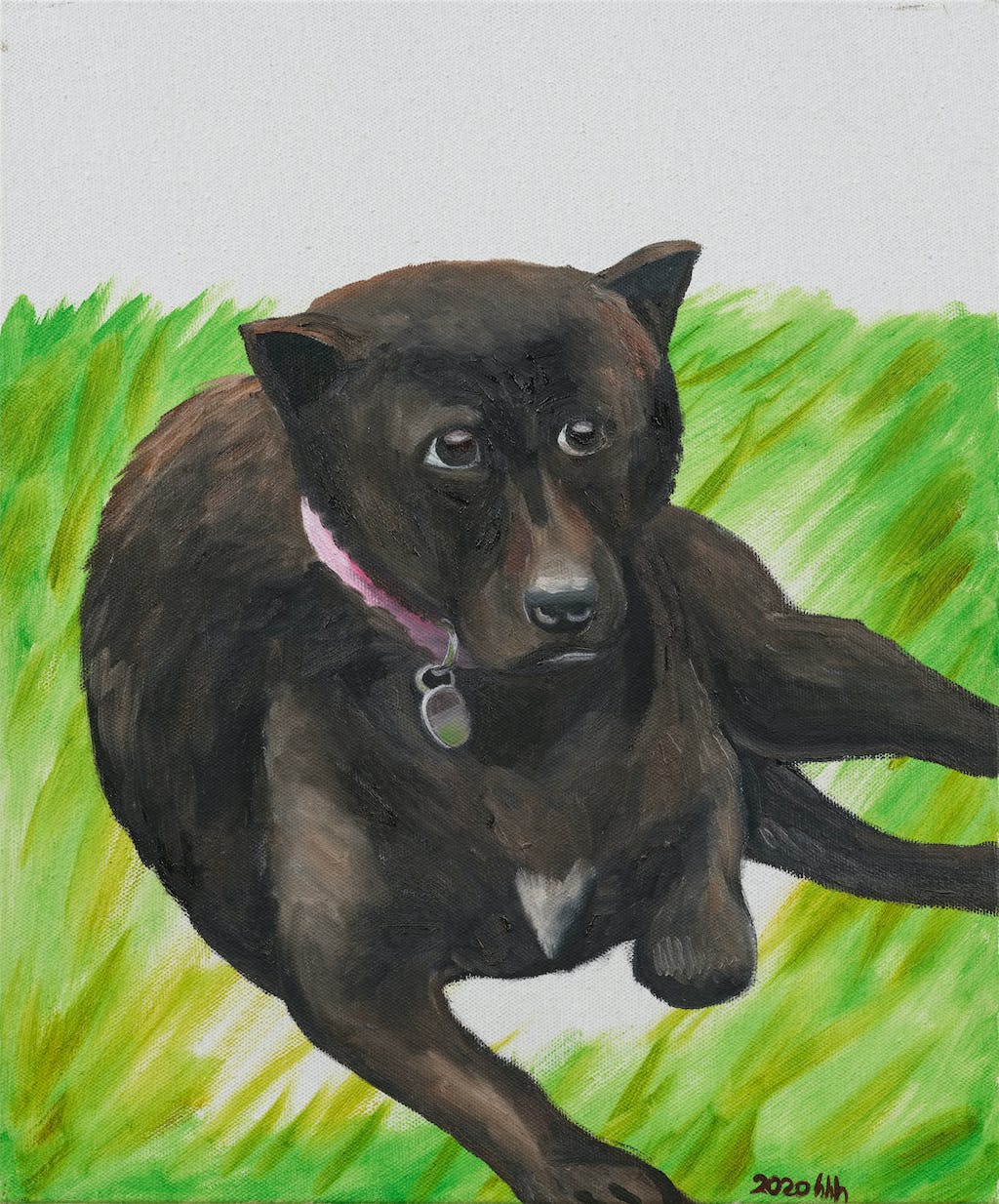 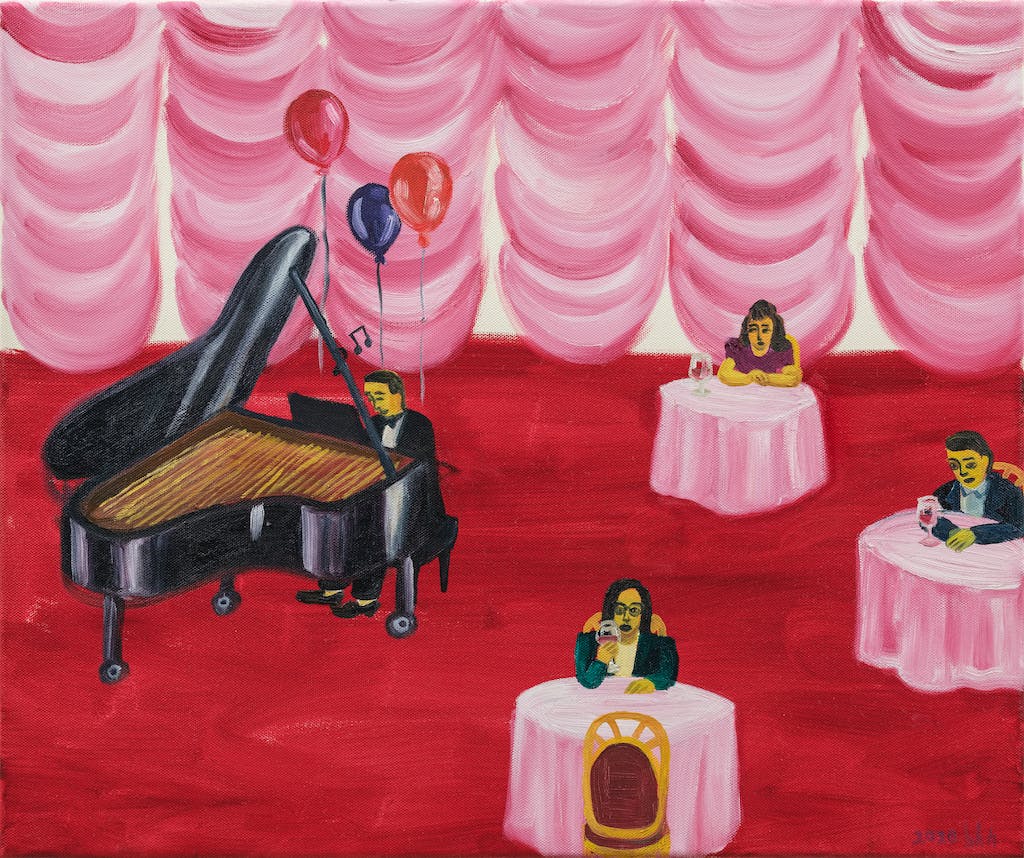 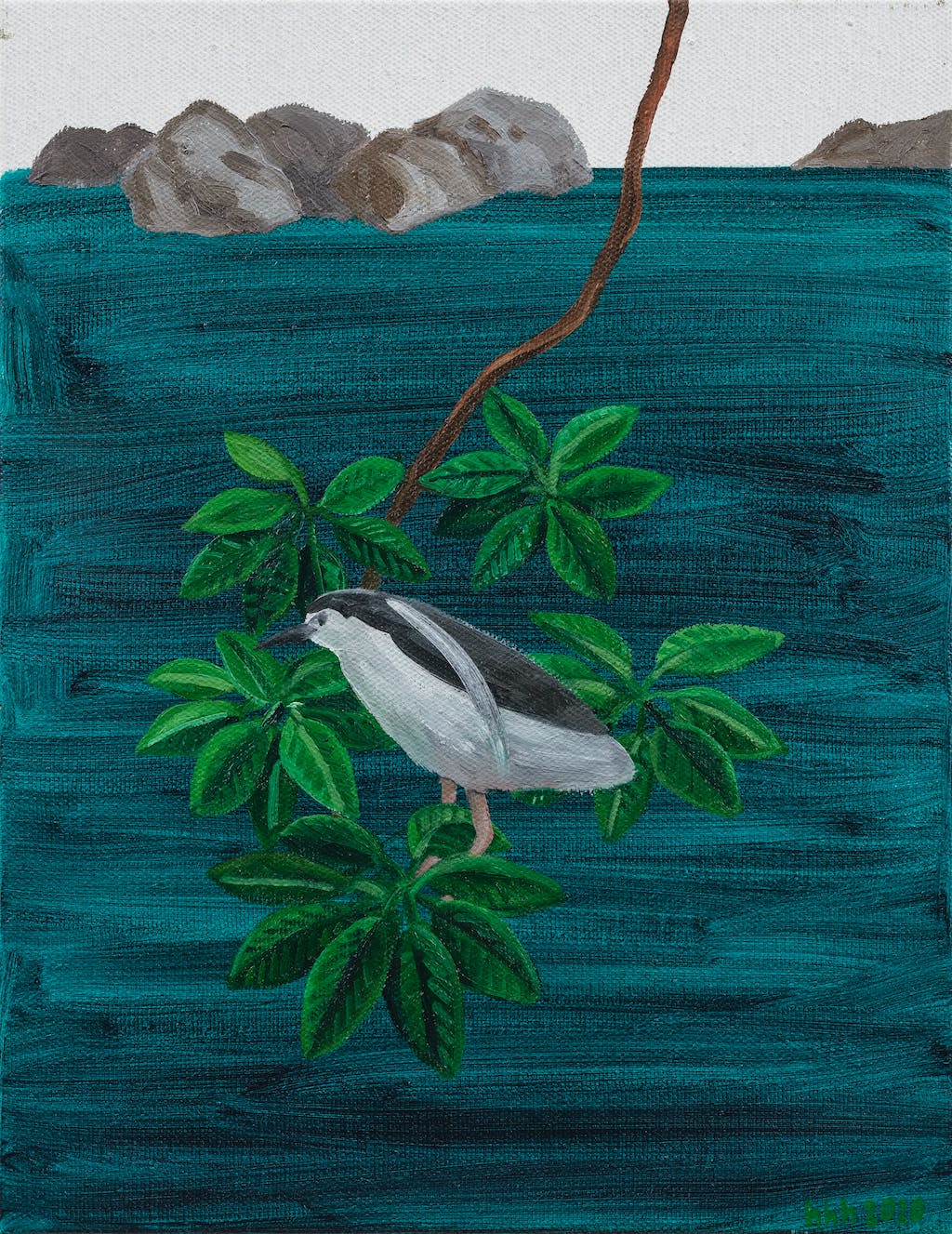 “My works express the beauty and uncanniness of single moments, the humour and tragedy that is in us, life’s grandeur as well as the fragility of humanity.” — Huang Hai-Hsin 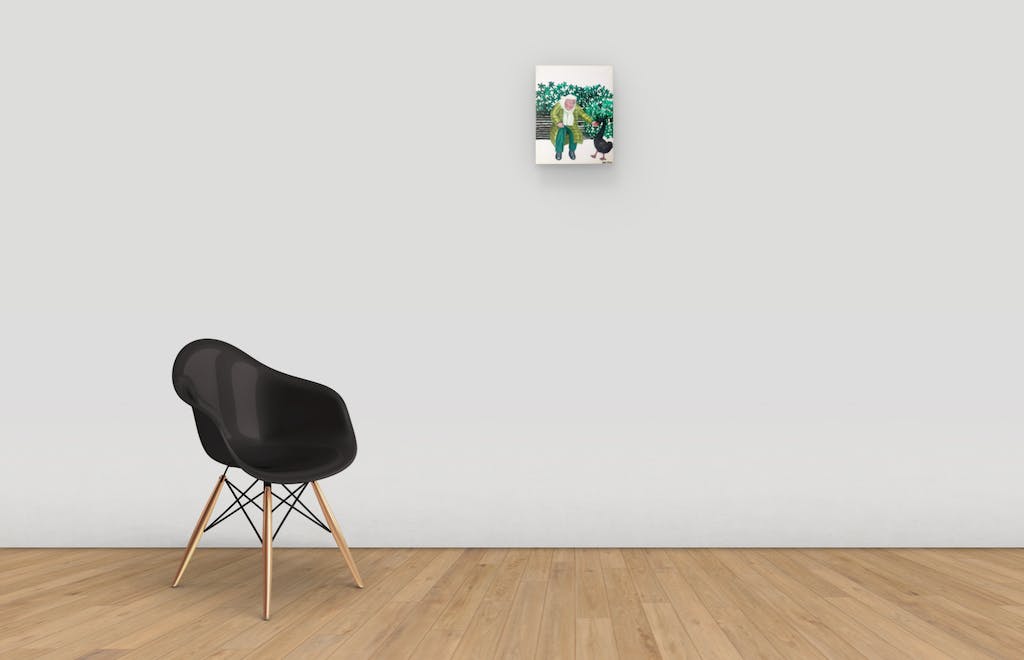 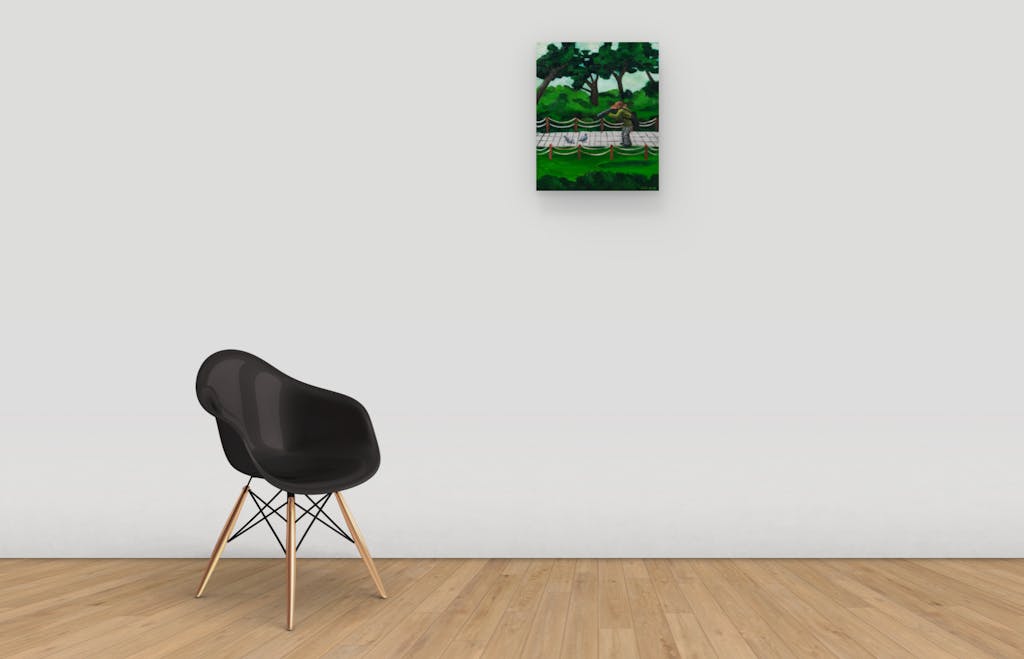 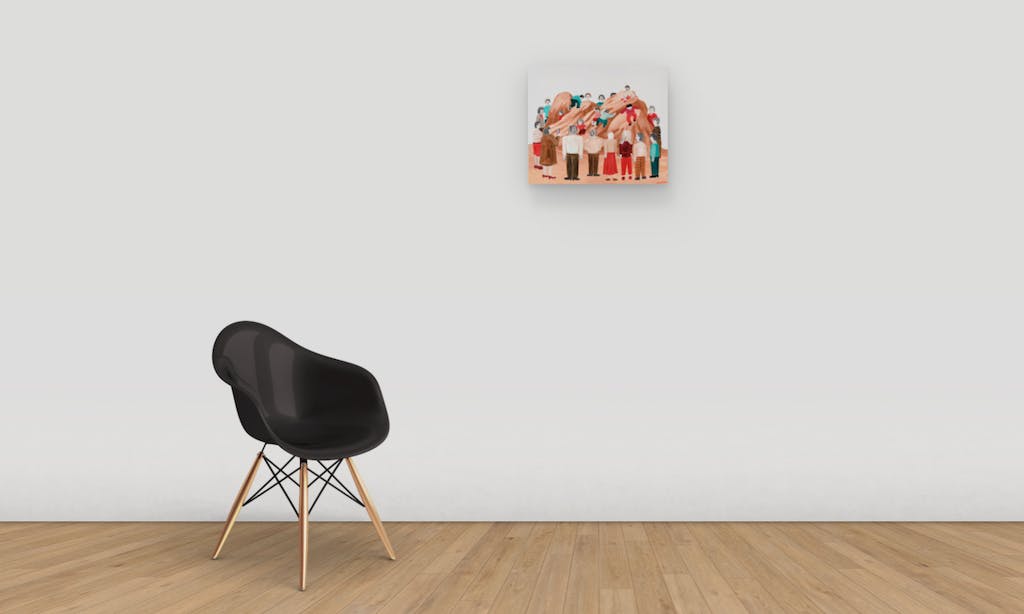 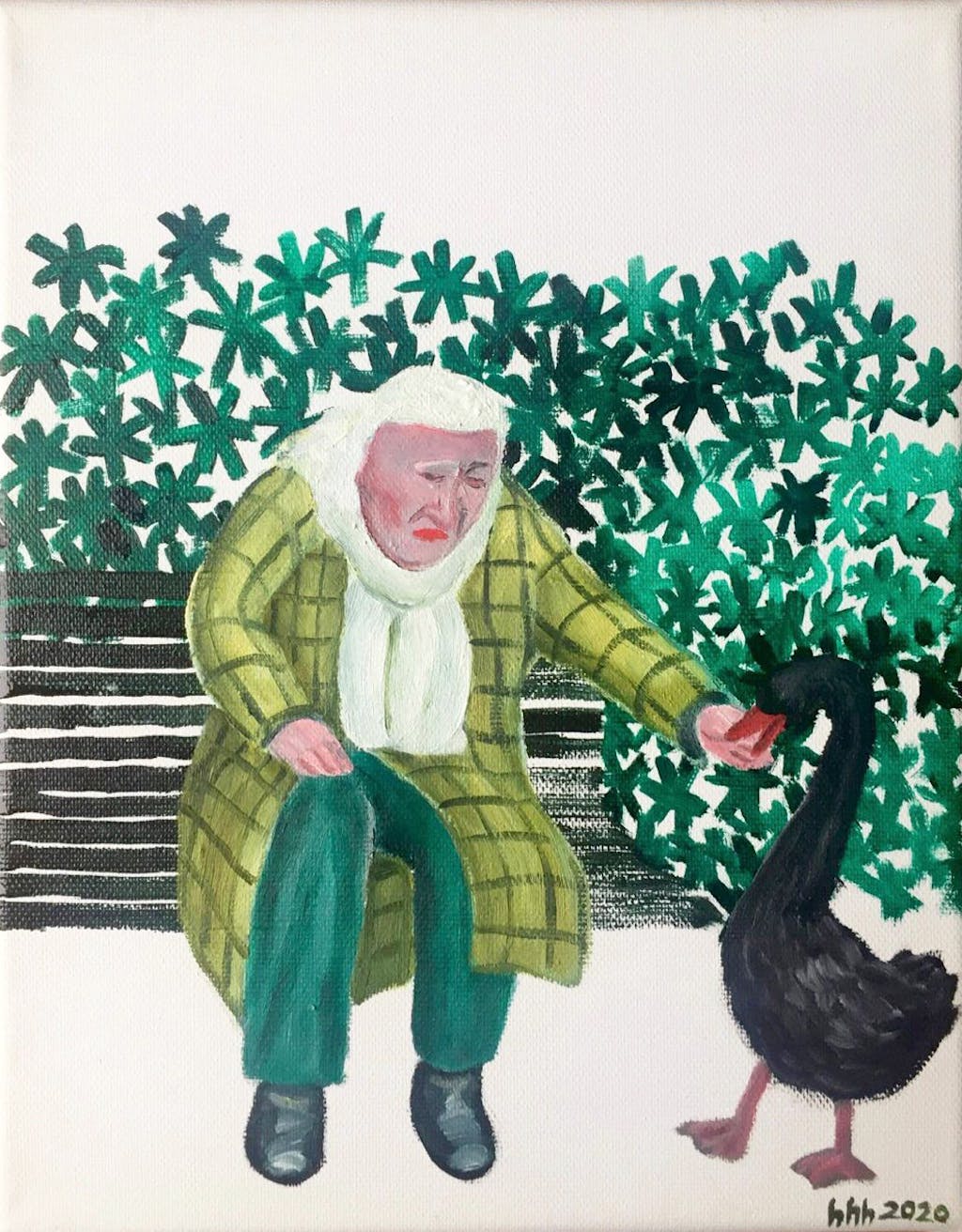 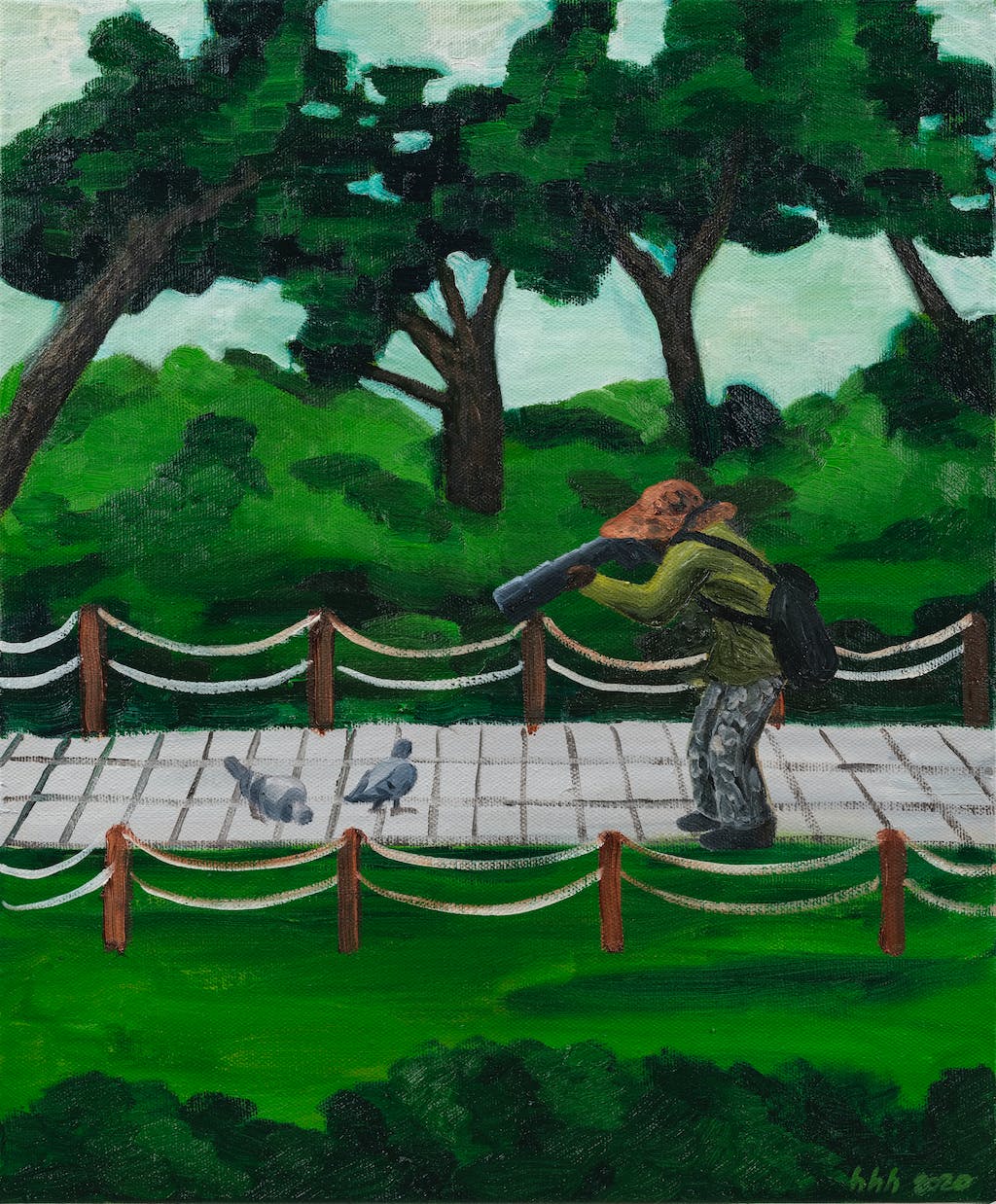 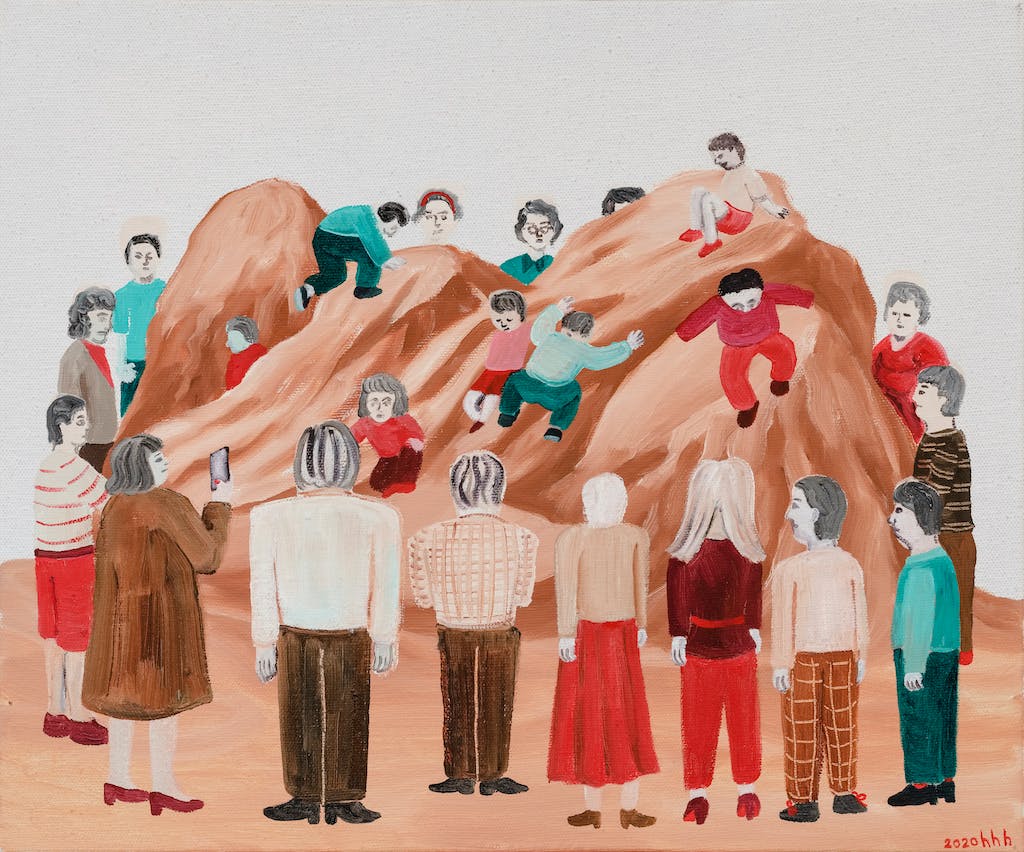 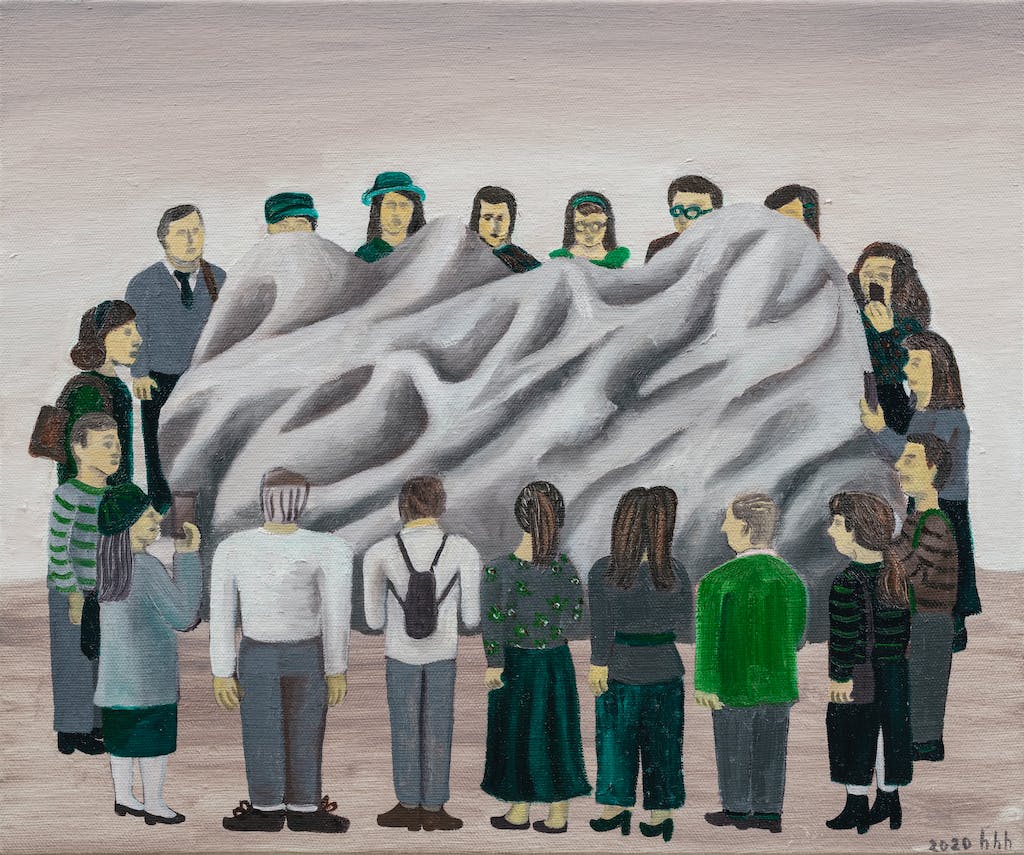 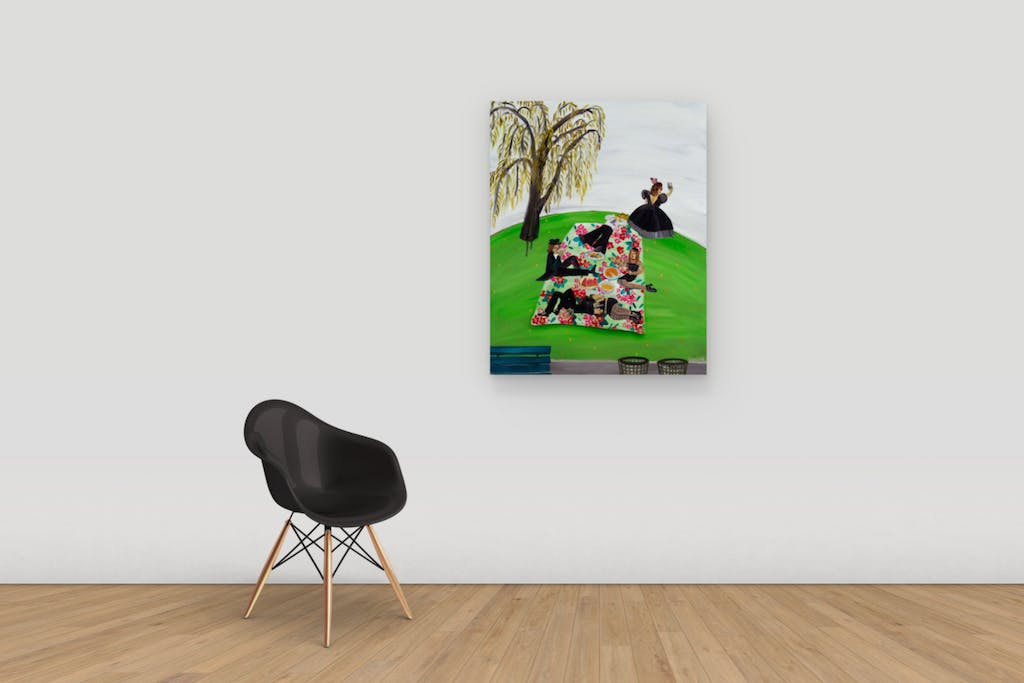 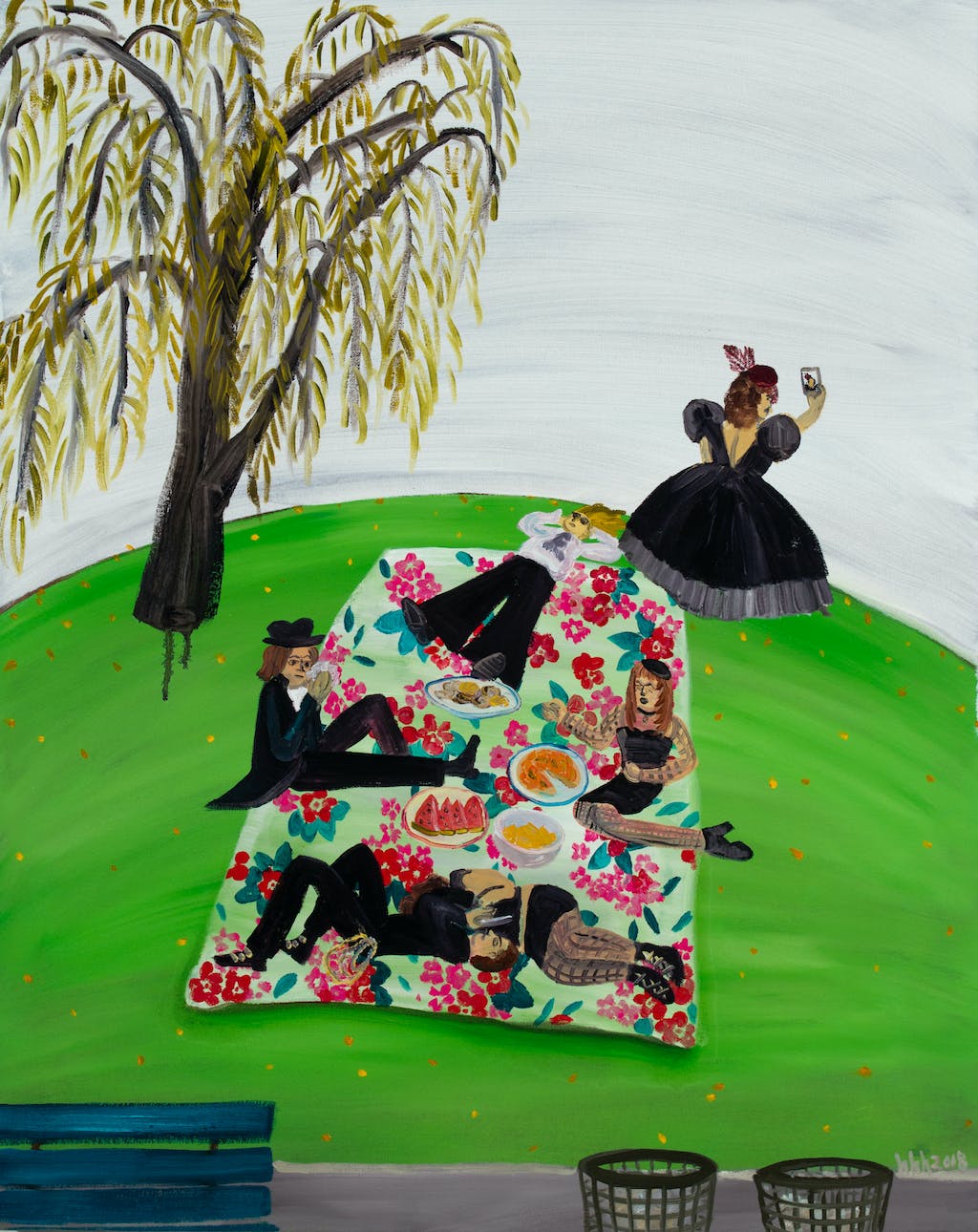 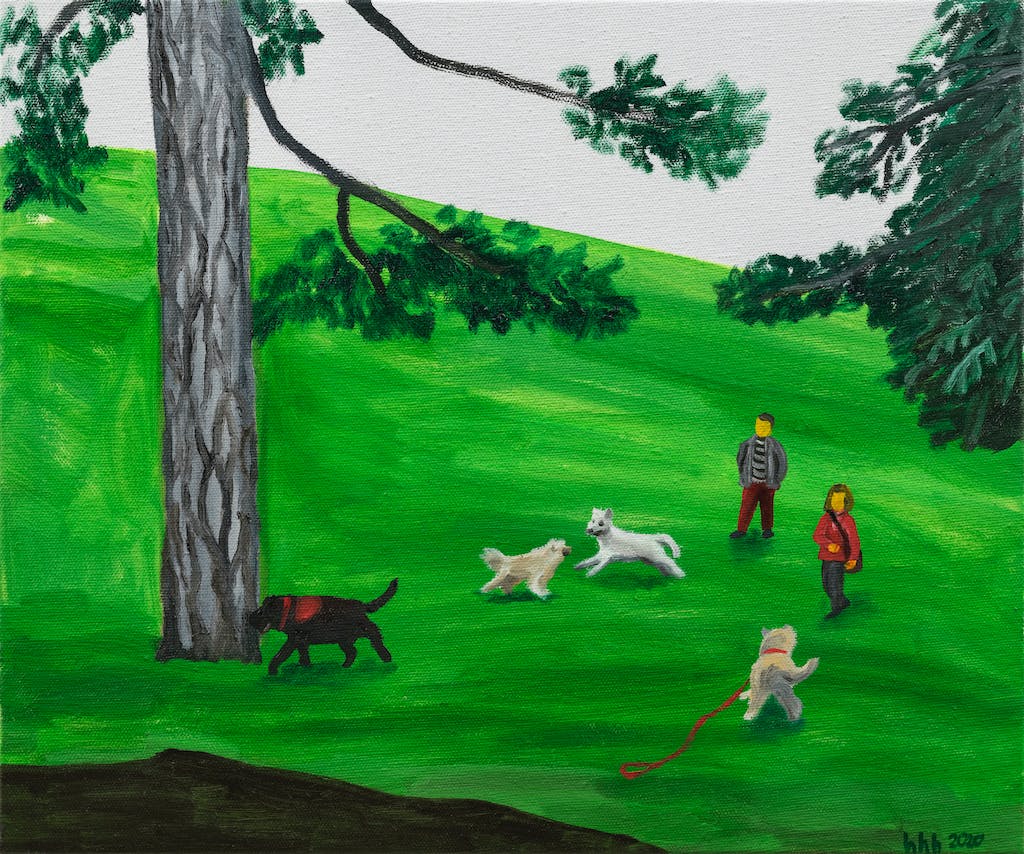