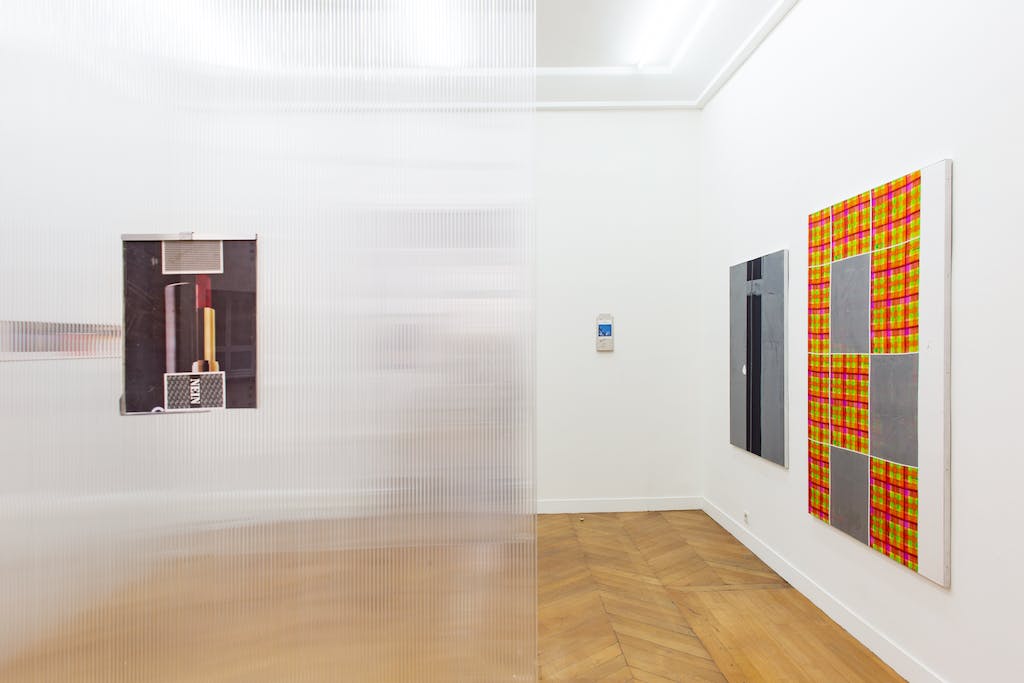 Founded by Alessio Baldissera, Gloria de Risi and Alberto Zenere, Fanta-MLN firstly opened as a project space in 2015 in a former warehouse under the railway system in Milan, and became a gallery in October 2018. Exploring a variety of artistic visions and media, the gallery’s program focuses on Italian and international emerging artists, alternating solo exhibitions with curated group shows. A particular interest is given to artists whose practice investigates our contemporaneity and the systems that regulate it, questioning more or less explicitly their linearity and normativity.

Lorenza Longhi addresses and contests the everyday as a set of standard functional rules, codes and forms of signification. In her practice, visual elements taken from communication strategies and objects that have a specific role within our contemporaneity are reproduced and remixed together, using laborious craft techniques as a way to complicate their primary forms.

For Paris Internationale, the artist brings together a series of different works coming from her most recent solo exhibitions, as well as a new piece conceived for the occasion and that serves as the central element of the presentation. In Untitled (P. de Résistance), 2021 a series of collages obtained by combining cropped Chanel’s makeup ads, table game cards and various found materials is attached through magnets to a hollow polycarbonate sheets structure hanging from the ceiling. The transparent structure, conceived as a pavilion and reminiscent of temporary architectures that recently became overtly familiar, melts with the space and directs the visitors’ movement around it. In combining references and materials coming from different registers and contexts, the work points at the rhetorics and agendas embedded within each of them, twisting and turning them apart in order to question their assumed neutrality.

Lorenza Longhi (b. 1991, Lecco, IT, lives in Zürich) studied at Brera Academy of Fine Arts and the Cantonal Art School in Lausanne. She has exhibited widely throughout Europe, including solo shows at Kunsthalle Zürich, Zürich, Fanta-MLN, Milan, Bungalow, Berlin, Weiss-Falk, Basel, La Plage, Paris, and Plymouth Rock, Zürich. In Milan, she was a co-founder of Armada (2014-2018), an artist and art workers-run space. In 2020, she won both the Shizuko Yoshikawa Advanced Award for Young Women Artists and the Swiss Emerging Artist Prize from Société Générale. Her work was also included in the 2020 Art Quadriennale, FUORI, curated by Sarah Cosulich and Stefano Collicelli Cagol, at Palazzo delle Esposizioni, Rome. She is currently one of the artists in residency at the Swiss Institute in New York. 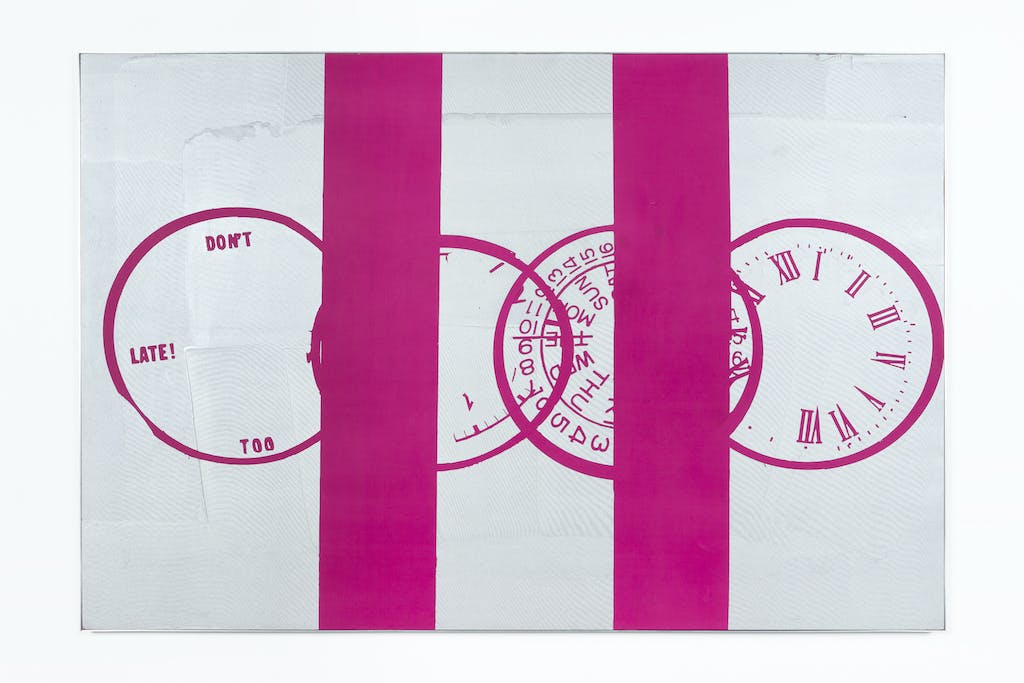 “The exhibition Minuet of Manners develops through an accumulation of moments: the seating outside, then a first room or corridor, there the initial, taped wall, then the large gallery and finally the works, the rods and the wall that literally completes the space. Longhi’s painting equally develops through layering. First the artist designs a composition on her computer. Then she buys cheap fabric (the first layer), pasting tape strips, sentences or graphics on this (second layer). She then lays out the fabric and prints silver paint onto it using a silkscreen frame (third layer). The frame functions like an outsized brush, generating patches of silver, sometimes dense, sometimes not. Gaps appear, because the material being printed folds over in parts.
These are not mistakes, nor are they planned, often they remain and sometimes they are printed over. Then the tape, sentences or graphics are removed and become voids, rendering the material visible (a coming and going, advancing and retiring, like in the minuet). Finally, the material is stuck to a board (fourth layer). The picture is then hung on a wall (fifth layer). Through this process interesting, elegant pictures emerge, perhaps surprisingly. The reason is as simple as it is hard to define: a dialogue comes about, a tension between the method of production, which is so straightforward and easy to comprehend, the artist’s formal decision making and the «mistakes» and how they bring the method, material and paint to light, as if these wanted to break free. Each of these ideas could spark a long narrative – on abstraction, say, its claims and ideological background. Or on happenstance and the power of the artist. How, for example, she makes painting into memes by running slogans across her pictures. Like the motivational phrases with which banks and art fairs greet us (Incredibly Global), the self-optimization mottos of fitness centres and consultants (Action Taken) or beautiful new phrases that emerge, like haikus, from our art and consumer culture: Inconspicuous Consumption. Longhi’s art, seeming at first so elegant and light-footed, draws us into the murky depths of contemporary life. These works are at once memento mori and memento memes.”

Excerpt of the text by Daniel Baumann accompanying the exhibition 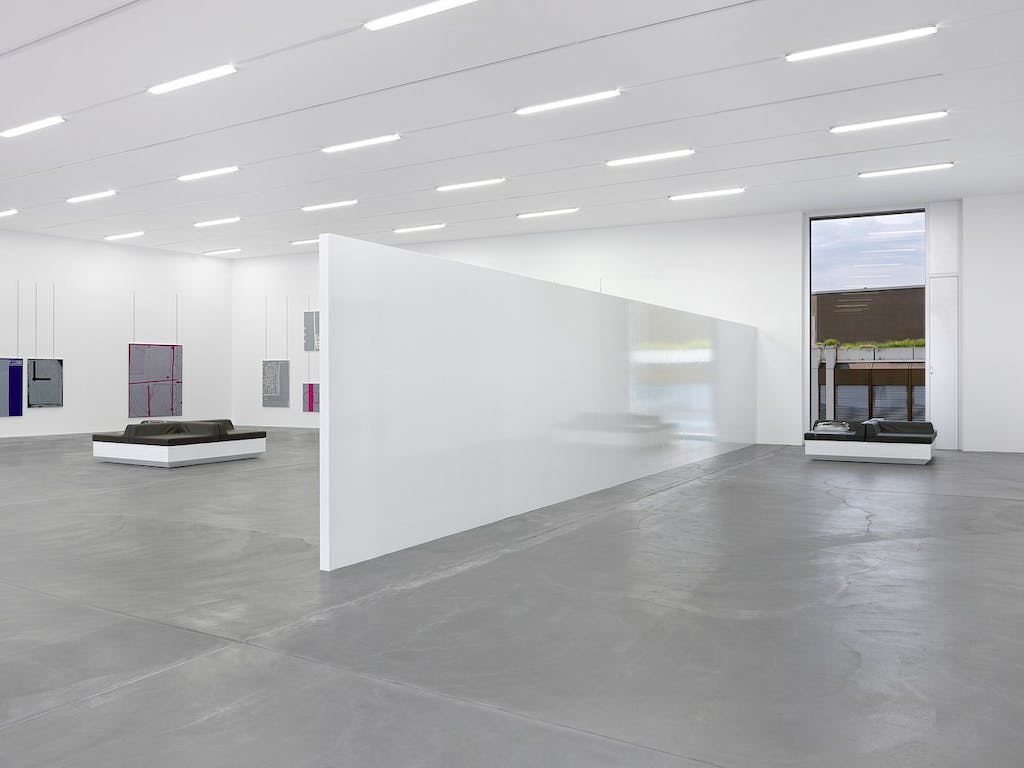 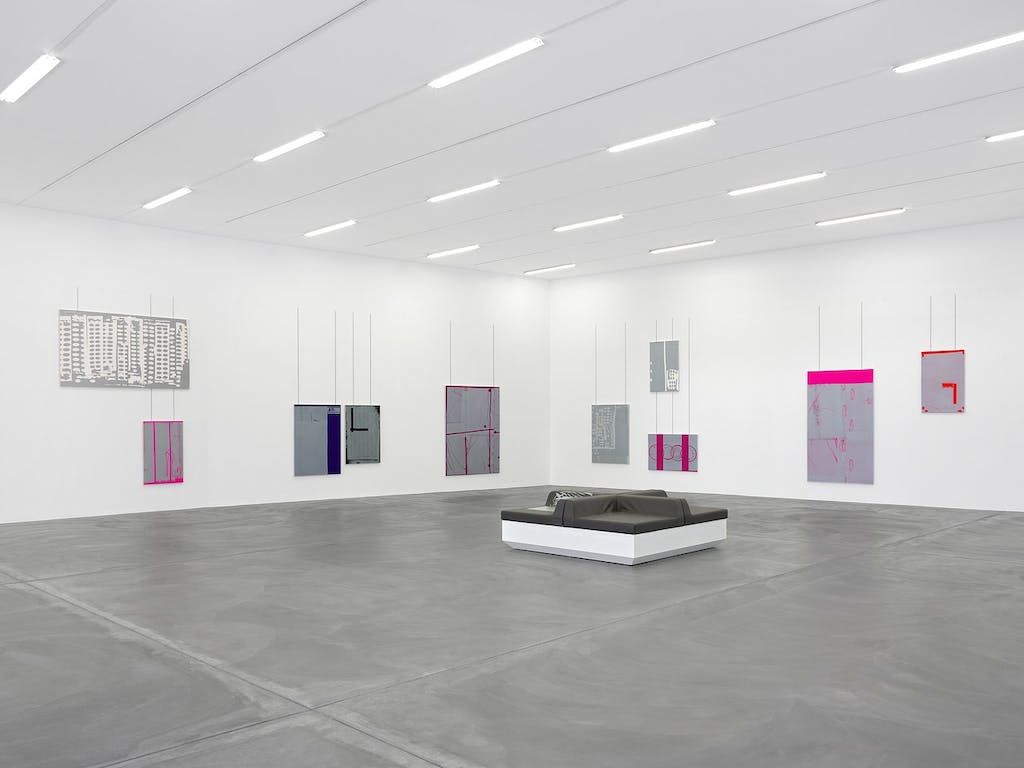 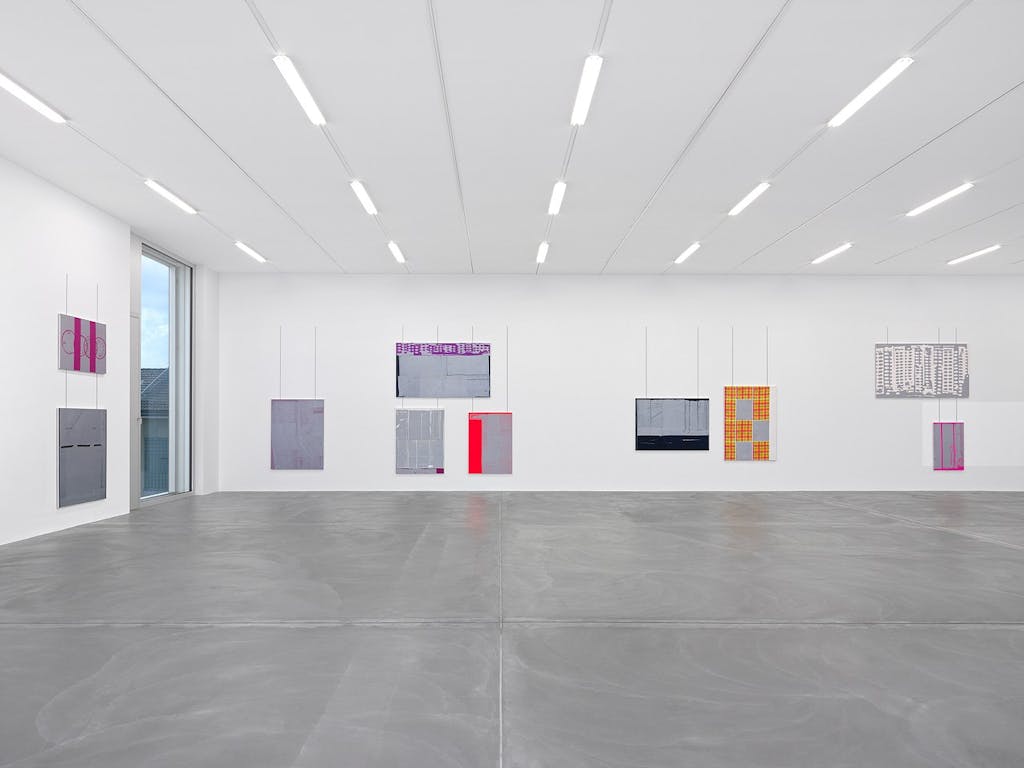 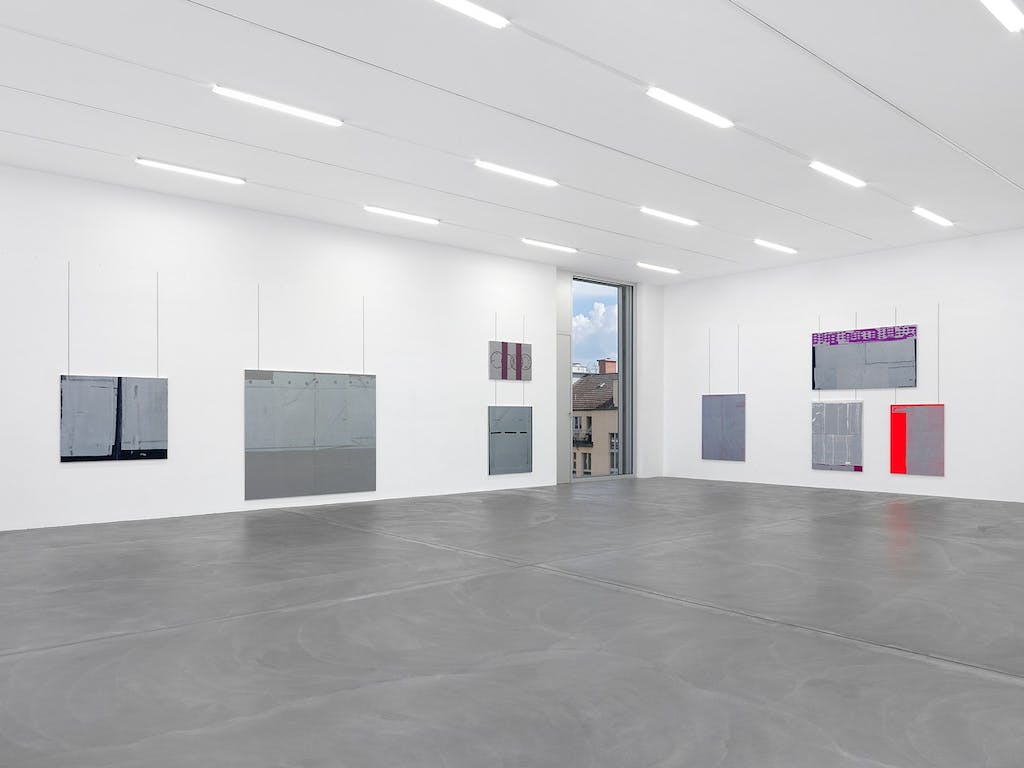 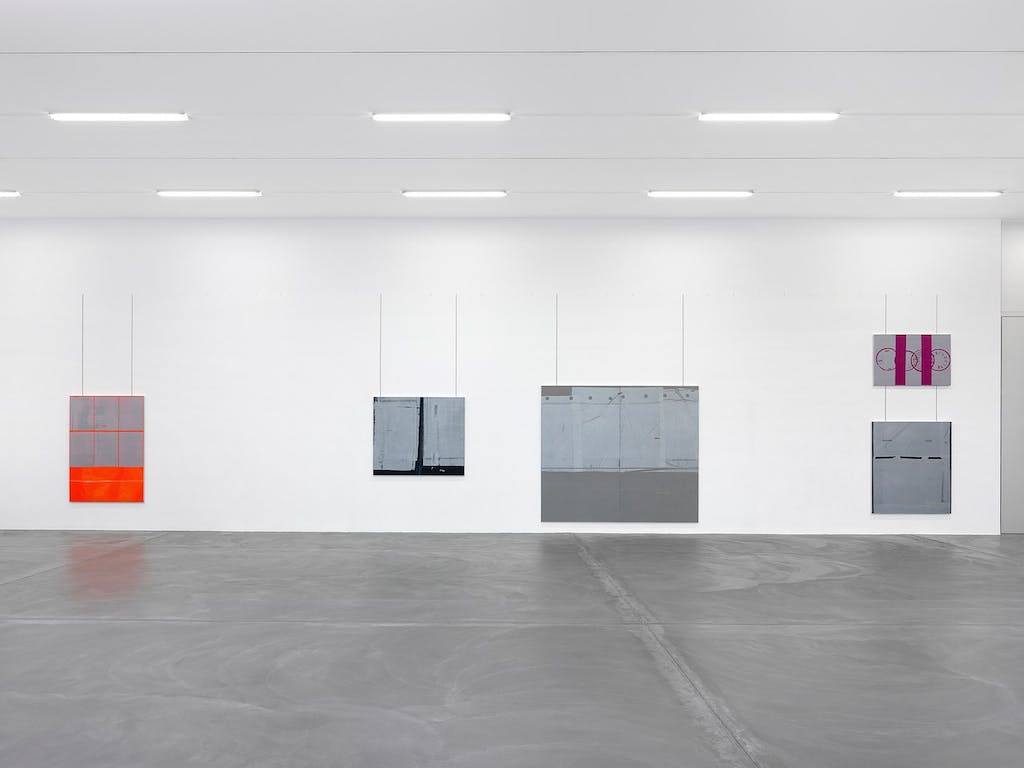 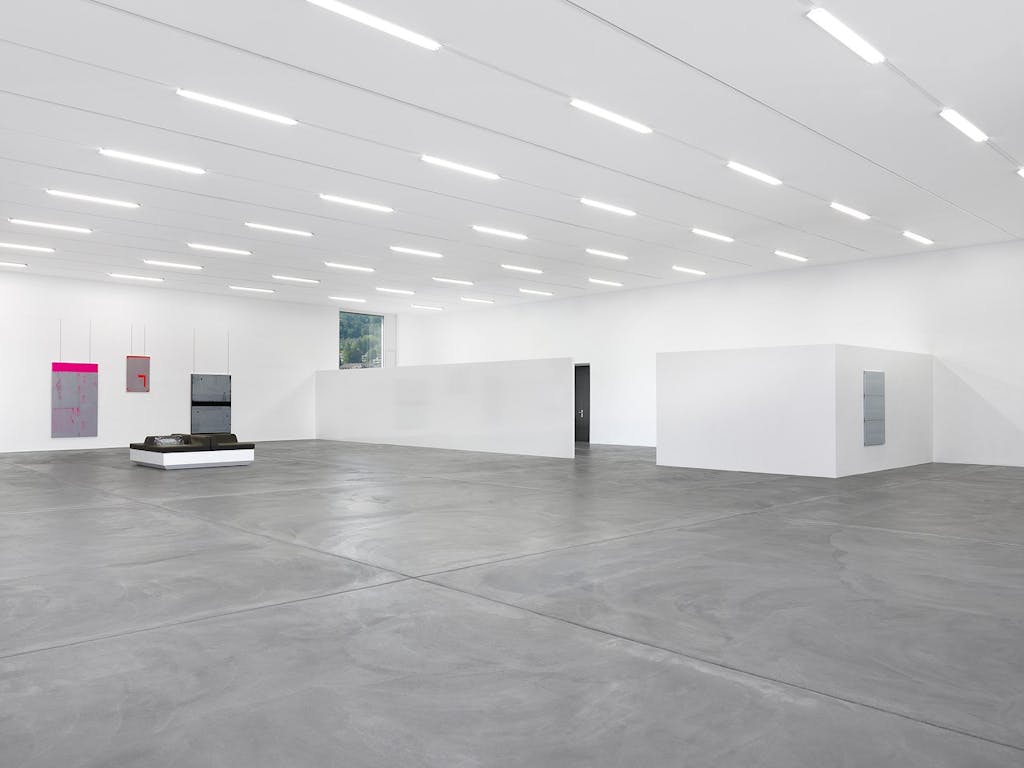 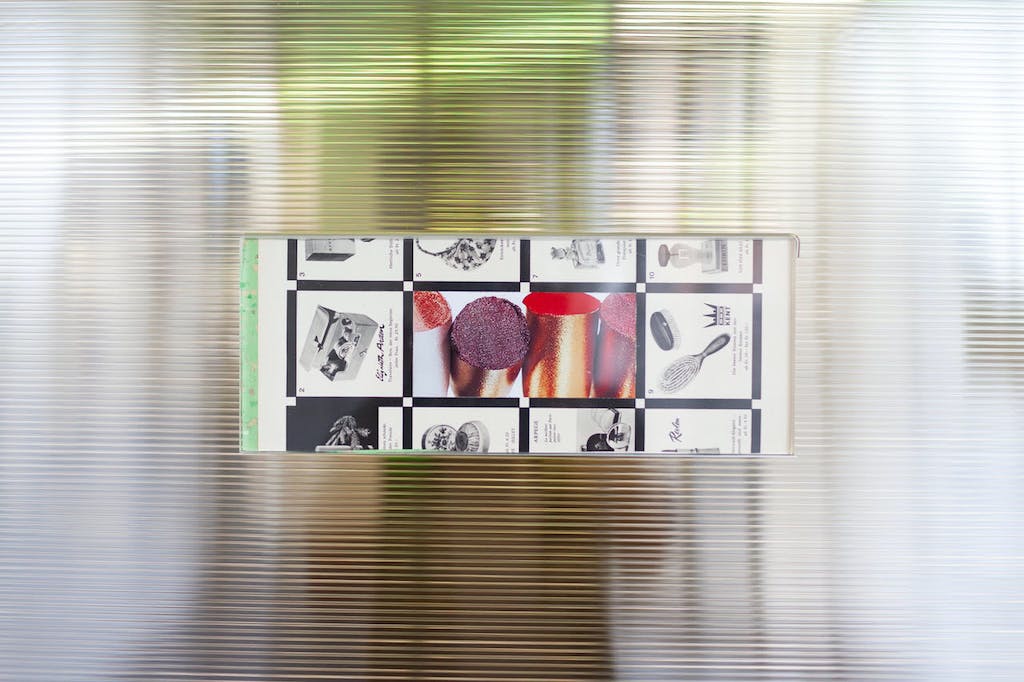 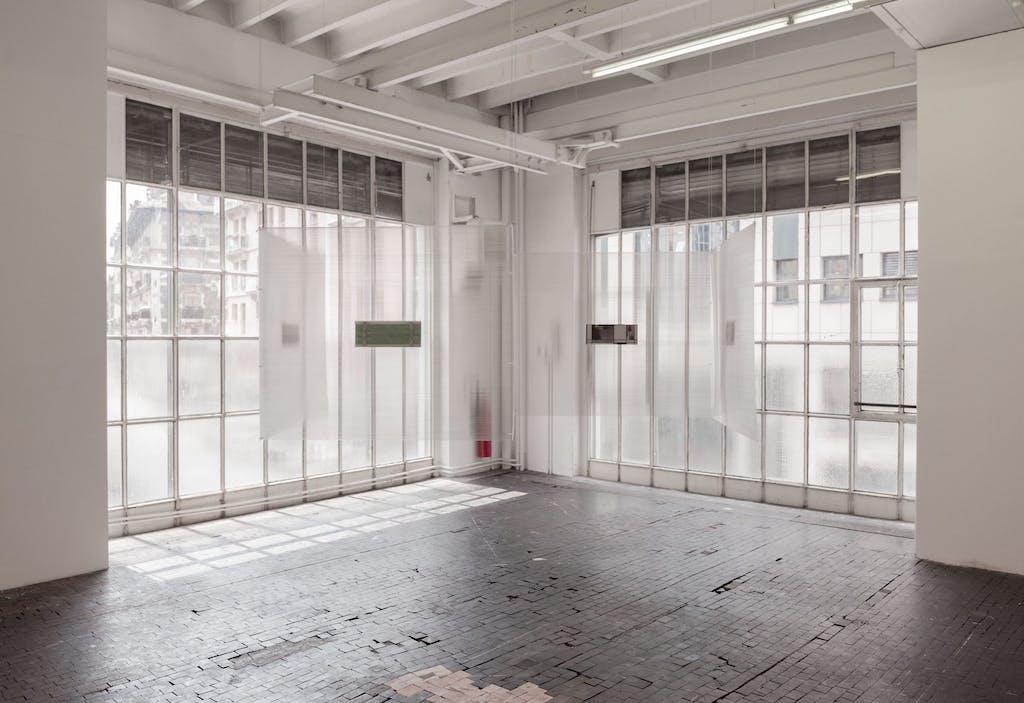 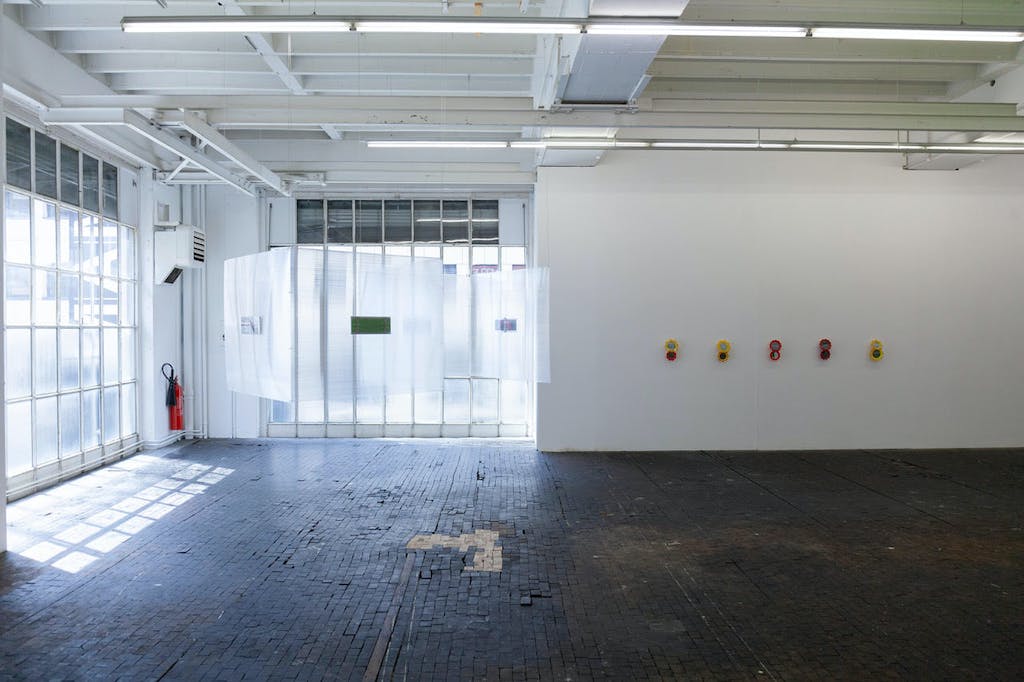 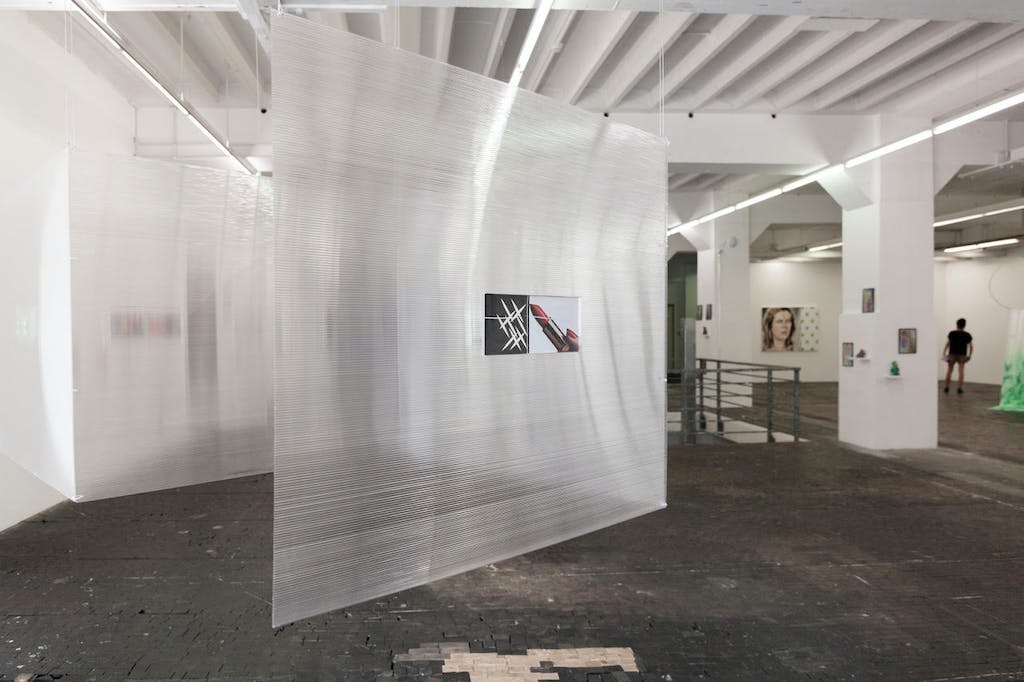 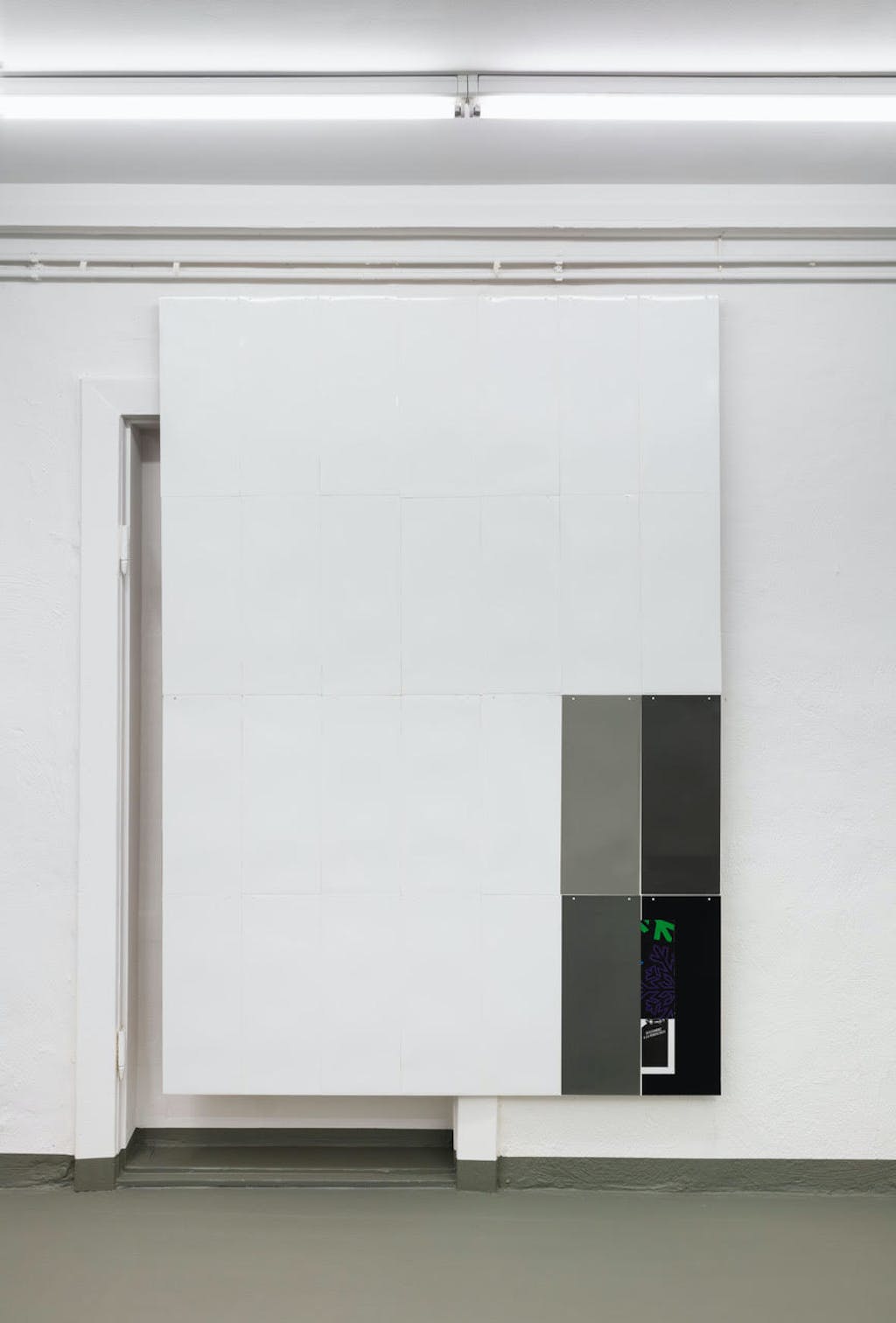 With your eyes shut, think of the cities, the apartments, the rooms you’ve ever visited. Perspectives start to emerge, like texts on the billboards and shop fronts. Geometries feel clear, but you have to focus to grasp details as they unfold into a—somehow—familiar composition. Now stop before the city or apartment or room acquires its final appearance, when things are still interchangeable to a certain degree.

Lorenza Longhi uses various techniques (which she masters, explores, or sometimes reverse-engineers) to produce works that flirt with industrial products, or rather with the ideas of “durability” and “efficiency” through which they find their way into our lives. Sometimes common objects, saved from the obsolescence to which some thrift store shelf condemned them, get involved, whether by camouflaging themselves or by retaining their unadulterated shapes yet getting caught in art’s alchemical transmutation (in Michael Thompson’s phrasing, one of those rare status climbs from “rubbish” to “durable goods”).

(We understand, now, that the composition is made of promises: adequacy, gloss, and a frozen moment.)

Or perhaps instead of “artworks,” plural, better to use the singular. In Longhi’s solo shows, the individual works are usually in the service of a meticulously choreographed holistic environment. They are condensed into measures, proportions, consonances, connections that entice us to discover new points of view, or to imagine more correct ones.

It is perhaps no coincidence that after our first site inspection at ChertLüdde, the artist and I went to see Aldo Rossi’s Quartier Schützenstraße—a formative entity for Longhi, although not a direct influence. It is a set of facades and courtyards that playfully interlock design with different colors and materials, tracing lines between the city, other cities in other countries, and art histories.

“I remember the first time I visited Berlin, in 2014. I was brought to observe this Aldo Rossi building. I didn’t know Aldo Rossi. I didn’t know the Palazzo Farnese, which the building is partly based on. I didn’t like the building that much. Yet its mechanism sat forever in my mind, and in 2020, when I went to see it again, things came full circle. As Louise Lawler said in that interview for Grey Room: Something is what you expect, but then not quite, so where does that leave you?” Lorenza later wrote me. 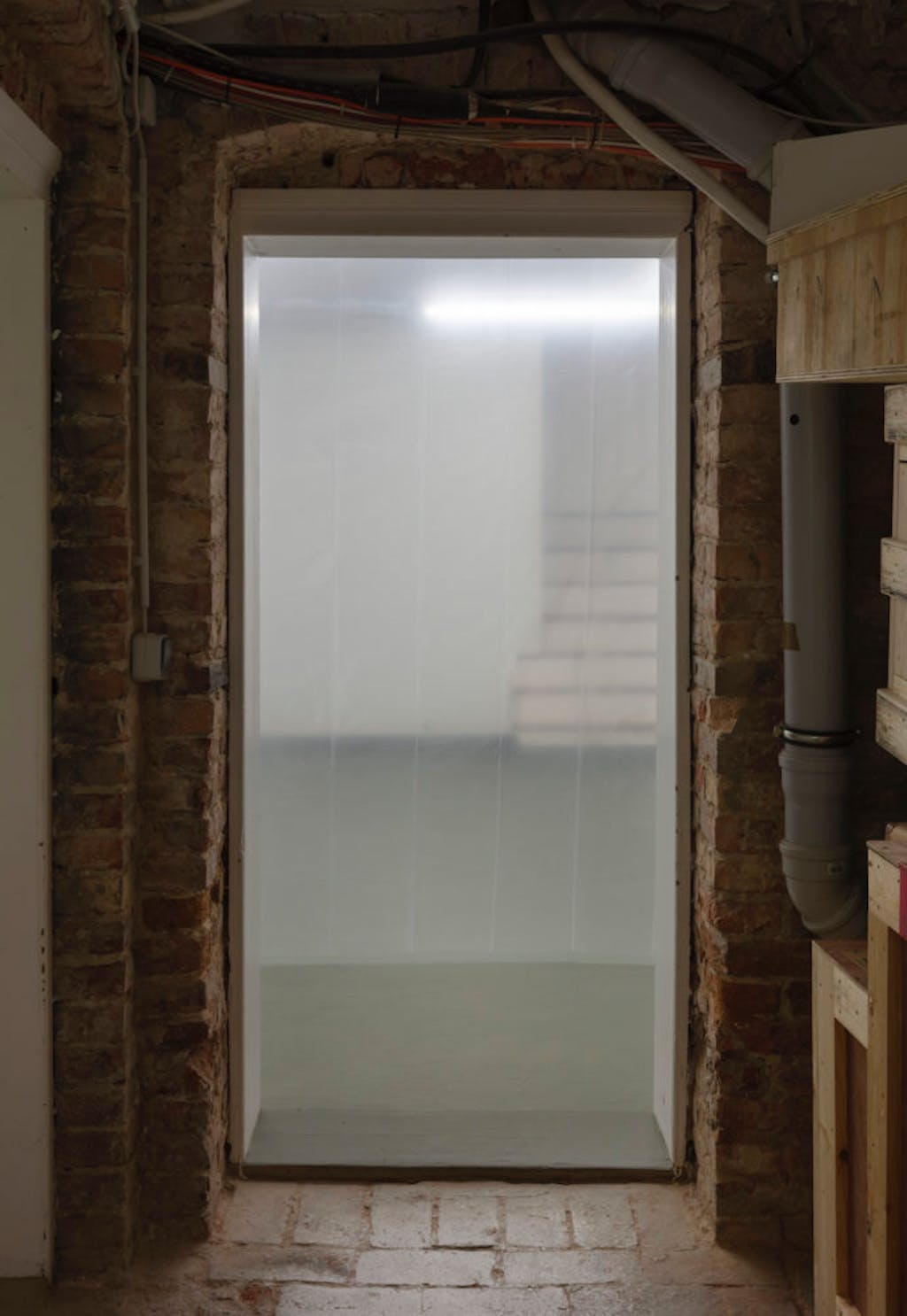 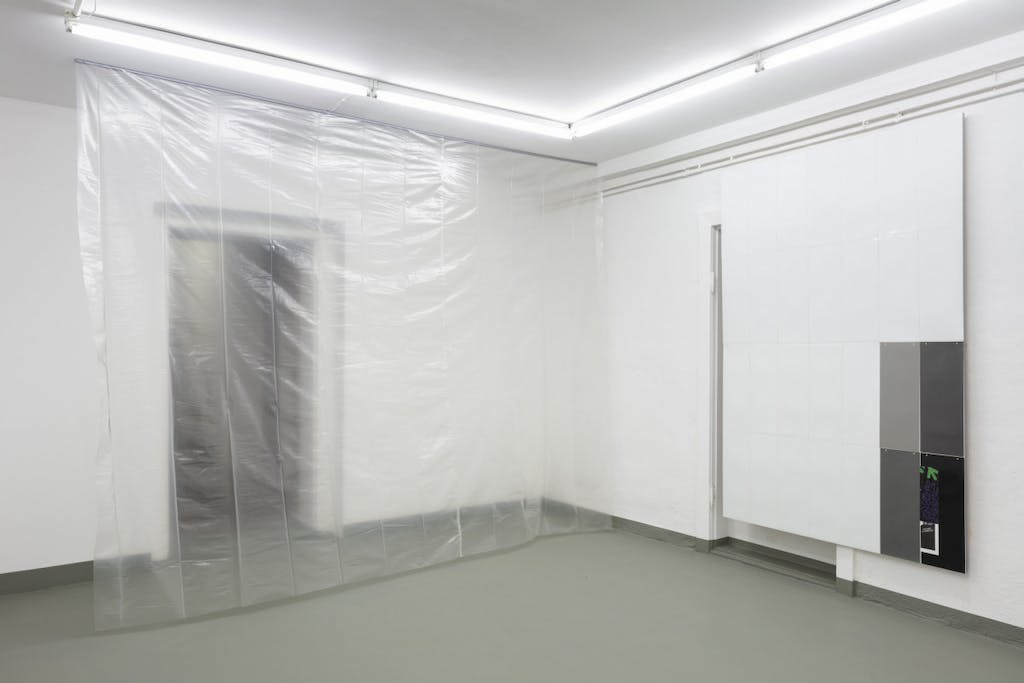 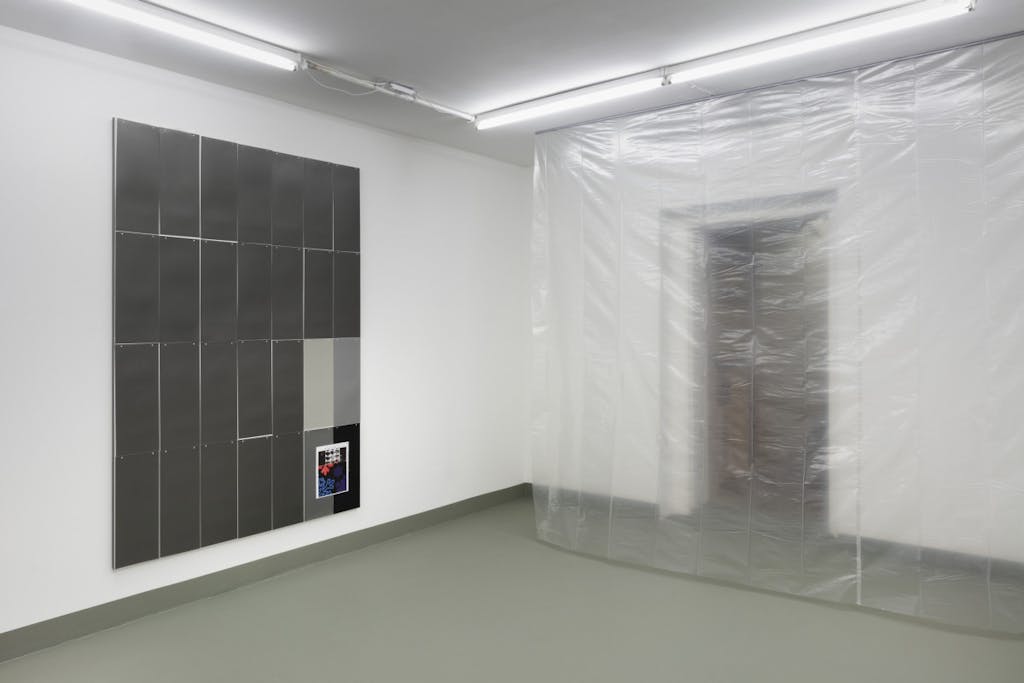