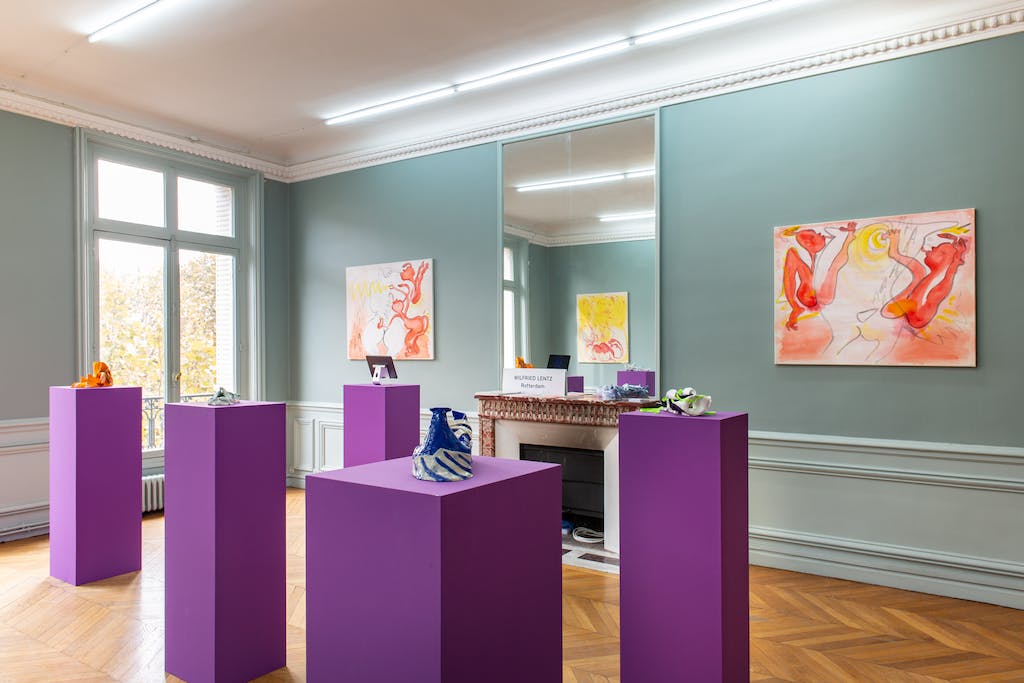 Wilfried Lentz Rotterdam was established in April 2008 and offers an international program of contemporary art. Most of the artists express an interest in the cultural and existential conditions of our environment and show their ideas through an innovative use of different mediums.

Gallery artists have been included in international exhibitions such as Documenta, biennials in Venice, Istanbul, Gwangju, Taipei and Sao Paulo, Performa New York and Manifesta. Our clientele consists of private and institutional collections from all over the world.

From the beginning we are located in Rotterdam, first in the Groot Handelsgebouw, a modernistic former whole-sale trade building next to the Central Station and from 2014 till June 2019 in the three upper floors of the former bath-house of the Justus van Effen block in the western part of the city. We relocated to a new venue in Rotterdam West, in the harbour area, where we now occupy the ground floor of a villa, the former office of the hides dealer Binneveld & Schellen.

Recent interviews regarding the gallery program are online in Conceptual Fine Arts and Contemporary Art Galleries. The gallery participates occasionally at international boutique fairs as Independent and Paris Internationale.

Michael Portnoy (b. 1971, Washington, DC, USA) is a New York-based artist. Coming from a background in dance and stand-up comedy, his performance-based work employs a variety of media: from participatory installations to sculpture, painting, writing, theater, video and curation.

Portnoy is largely concerned with manipulating language and behavior as a tool for world-bending – either in his “Relational Stalinist” game structures in which confusion, complication, and ambiguity are used to stretch participants’ speech and movement; or his quest to “improve” existing breeds of art through re-engineering.

The goal of Portnoy’s multichannel video work Progressive Touch (2019) is to “improve” sex, as he puts it. Exploring and expanding the relationship between human sexuality, choreography, and musical composition, he aims to combat the apparent simplification of rhythm in human movements and gestures. This can be observed in the industrialization of labor or the history of contemporary dance, where the relation to rhythm has been either severed or reduced to allusions to pop culture. This situation can also be noticed in the predictable cadences and movements of sexual intimacy, long since exploited, commercialized, sensationalized, or desensitized. Portnoy proposes complicating this all-too-predictable condition by introducing the complex meter and compositional structures found in progressive rock and math metal to the sexual act. A group of actors performs modified steps in the sexual encounter in slapstick vignettes. Together they make up a composition resembling a rock opera and also provide an example to be tried out at home. 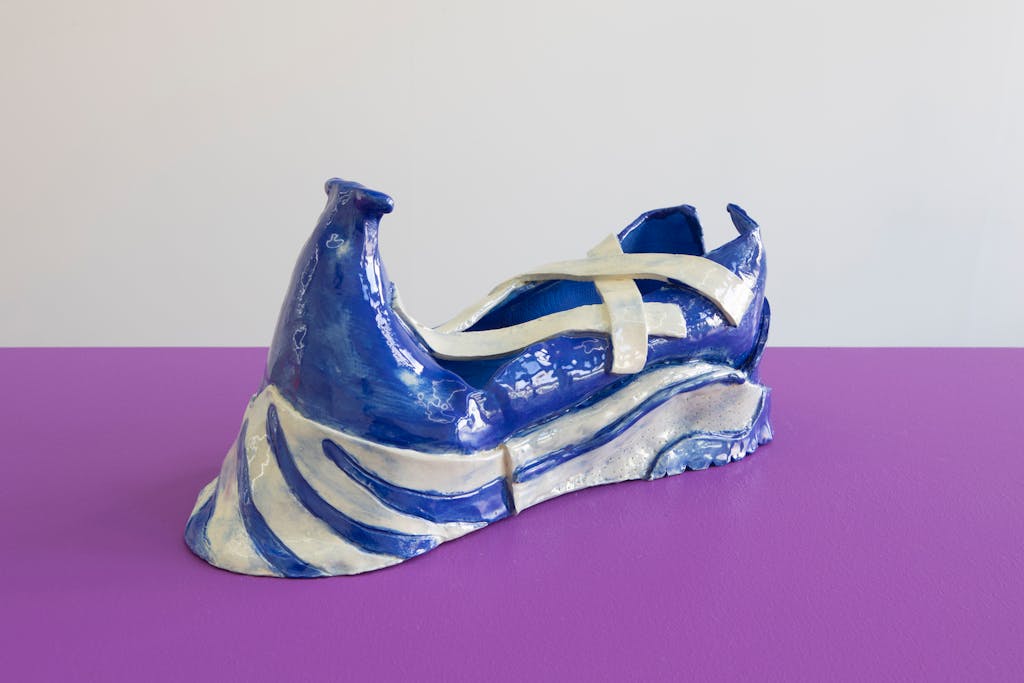 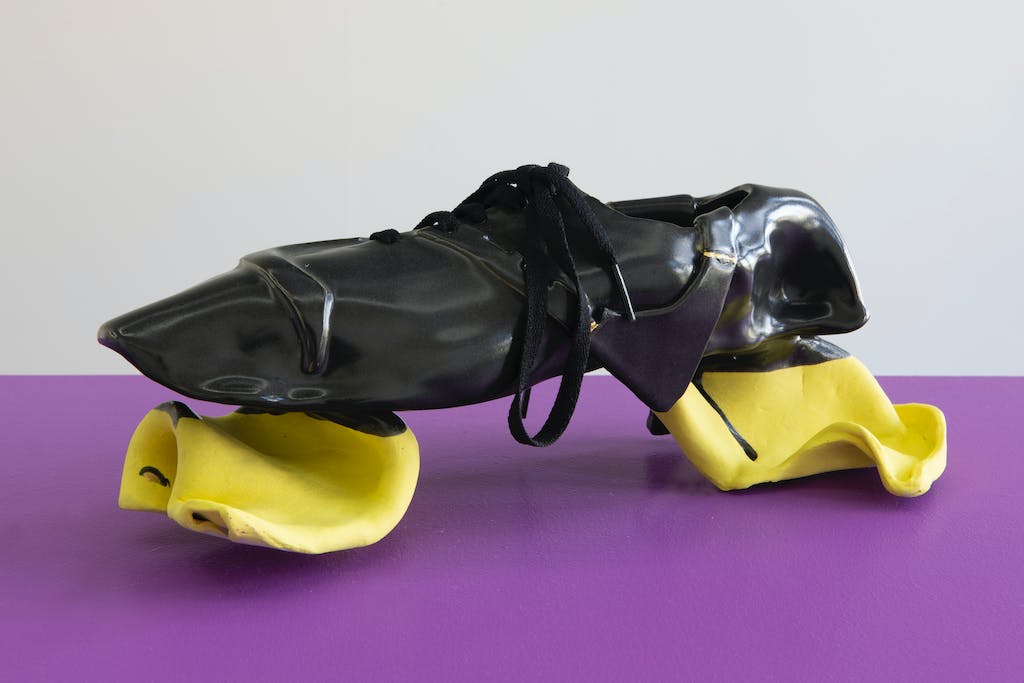 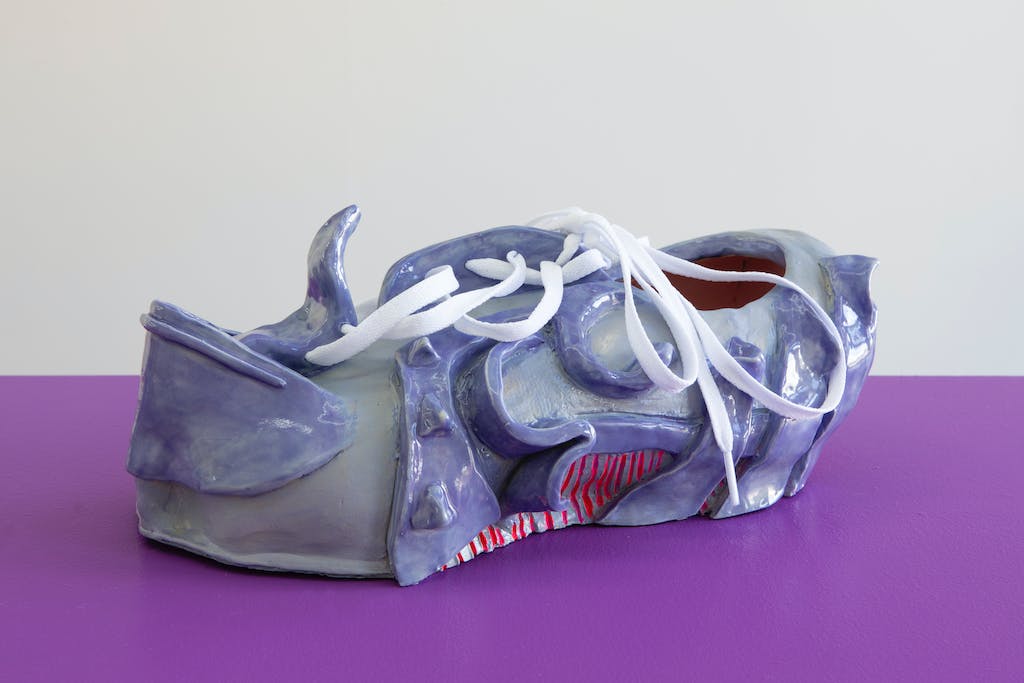 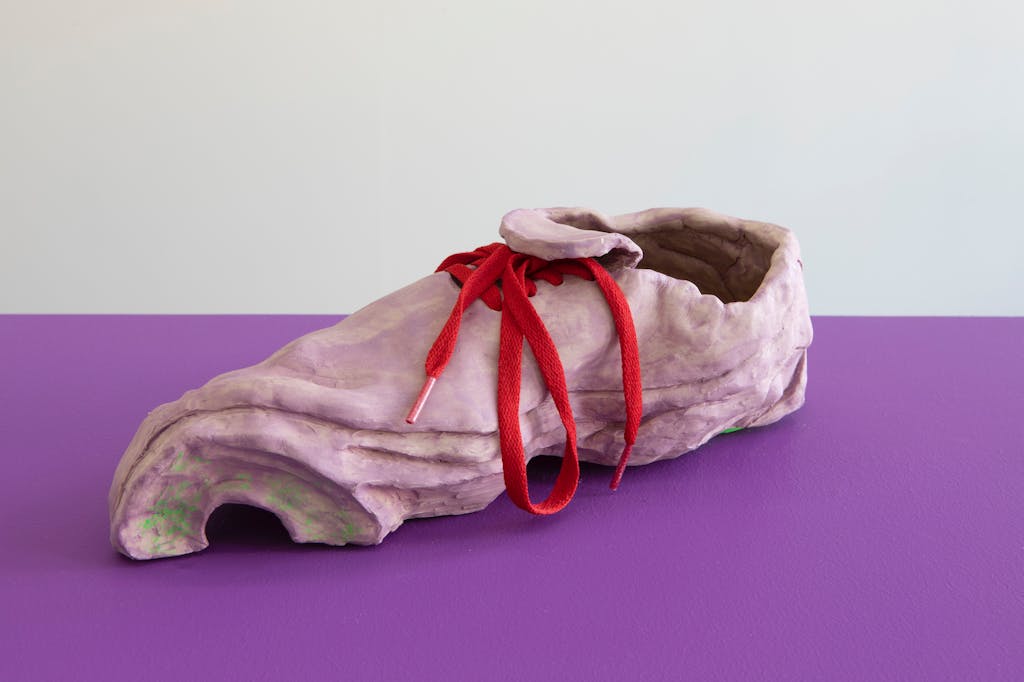 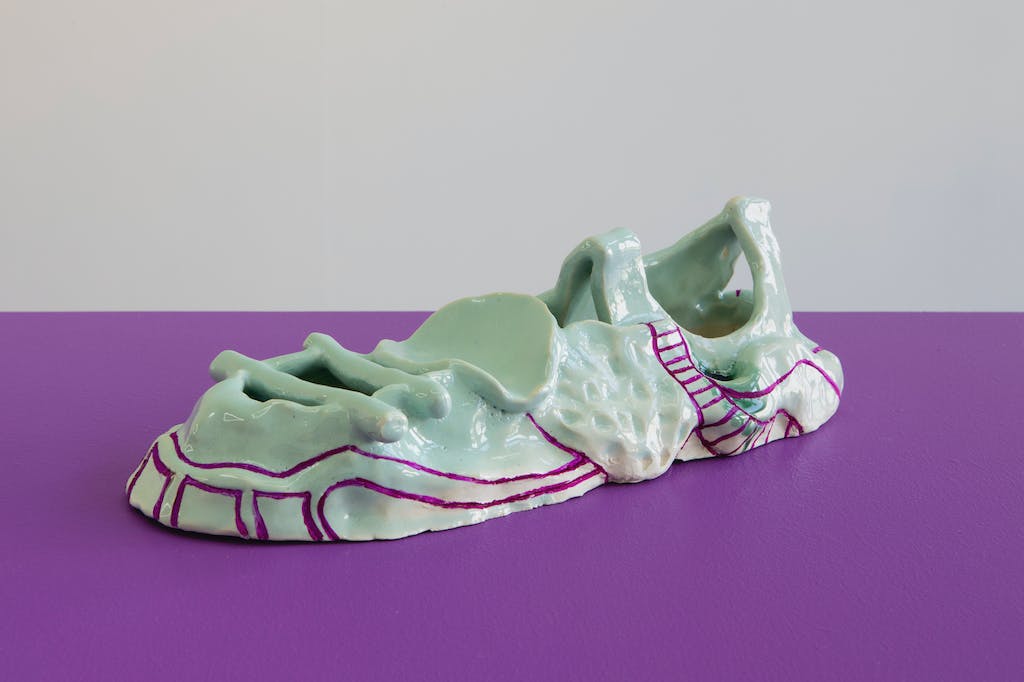 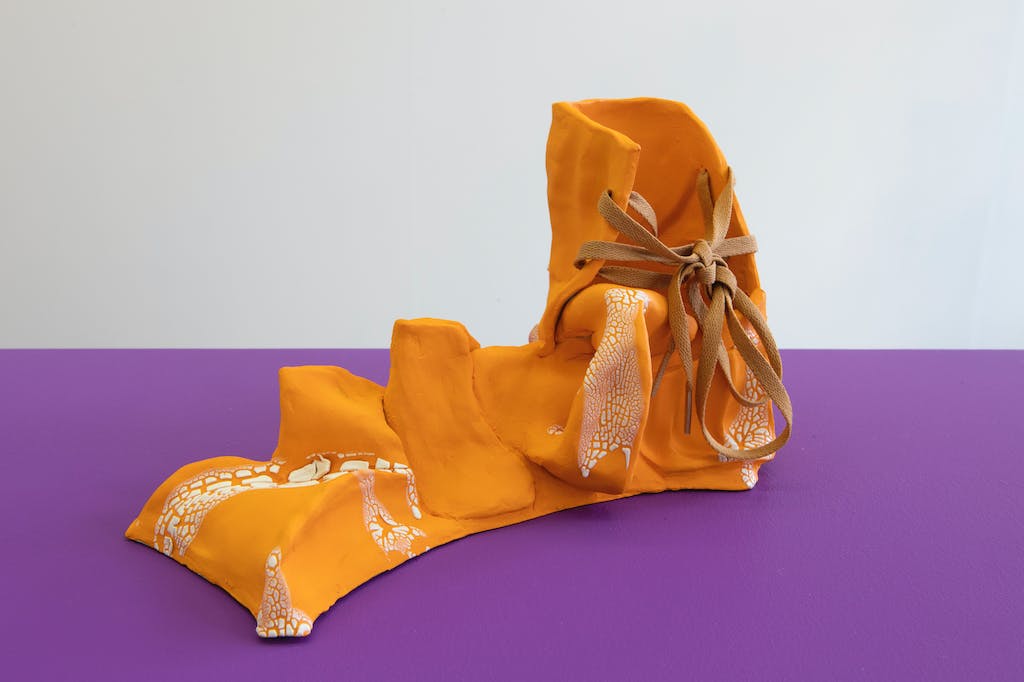 URGENT, a new fashion line by artist and Director of Behaviour Michael Portnoy, launches a collection of ugly and ridiculously expensive ceramic Tactical Trainers, upper-body-sized Industrial Felt Emblem Necklaces, and White Mutes (imagine the thing you stick in a trumpet to mute it, but for annoying white people’s mouths).

MICHAEL PORTNOY: TOUCHING ON EVERYTHING

Touching on Everything (2018) trailer

We ask a lot of art these days. Art must generate crowds and be Instagrammable yet anti-spectacular, universal yet site-specific, topical yet timeless, political yet poetic. In short, art must touch on everything, and with its magical MacGyver fingers, gather up seemingly disparate fragments and make something of them… in other words, make everything better. Michael Portnoy’s new commission for steirischer herbst literally touches on everything. His performance is based on the remnants of the allegorical Yiddish play All Things Touch All Other Things Eventually (1928) by one Yosef Birnheim, which the artist found in a trove of documents recovered in Graz after World War II. The original play was never performed due to its scale, demanding as it did a cast of over seventy actors. While Yiddish allegorical folktales typically involve the conflict between one or two characters (Luck and Wisdom, Falsehood and Truth), Birnheim wanted his satirical play to represent an entire philosophical system of the interrelations between all ideas, each personified by his actors and the stage props.

In Portnoy’s Touching on Everything the performers embody a range of abstract allegorical concepts. It is structured as a collection of short tales recited by a narrator about the inner lives and interactions between these notions (Nationalism, Identity, Politics, Justice, Gender, etc.), each of which is identified by an industrial felt sculpture worn around the neck of the actors. Every day we ask these notions to serve us in making sense of the world, but perhaps we should instead wonder what these notions want themselves, what demons they face when they’re alone, what strange language they speak to each other? Can we even understand it? With elements of contemporary dance, Yiddish song, variety theatre and physical comedy, Touching on Everything plays out the complex relations between these abstractions.

In opposition to the strangling of museum spaces worldwide by rampant immaterial kudzu, (i.e. Post-French Post-Conceptual Dance, Dance-We-Can’t-Call-Dance, Po-Faced Minimalism, Feel-Good Participatory Glibbery, (a.k.a. Too Many Seagulls), and Performance with no qualities whatsoever aside from its leeching of court-approved historical referents, (a.k.a. Fancy Shoulder Piggybacking)), the breed of Relational Stalinism arose in a Theater Internment Facility in Preoccupied Benelux in the late Twenty-Teens. The primary tenets of Relational Stalinism are: Emboldening Confusion, Logocratic Exuberance, and Antic Behaviorism. Relational Stalinist works use a slippery iron fist to unbutton the viewer’s buggy of self and catapult her into a realm of truths only palpable through higher forms of irrationality.

This advanced breed of world-bending adopts the degree-zero performance palette as a constraint (performers, in a room, that’s it), but pushes it out of monochrome and into a pubotany of deviously vibrant offshoots which stretch participants’ language and behavior in the service of invention.

Relational Stalinism – The Musical is the latest branch of Portnoy’s Improvement League, initiated in the Taipei Biennial 2010, which seeks to “improve” existing breeds of art-making by pruning, grafting and hybridizing certain lines of thought in a kind of conceptual horticulture. (Source: Witte de With Center for Contemporary Art Rotterdam.) 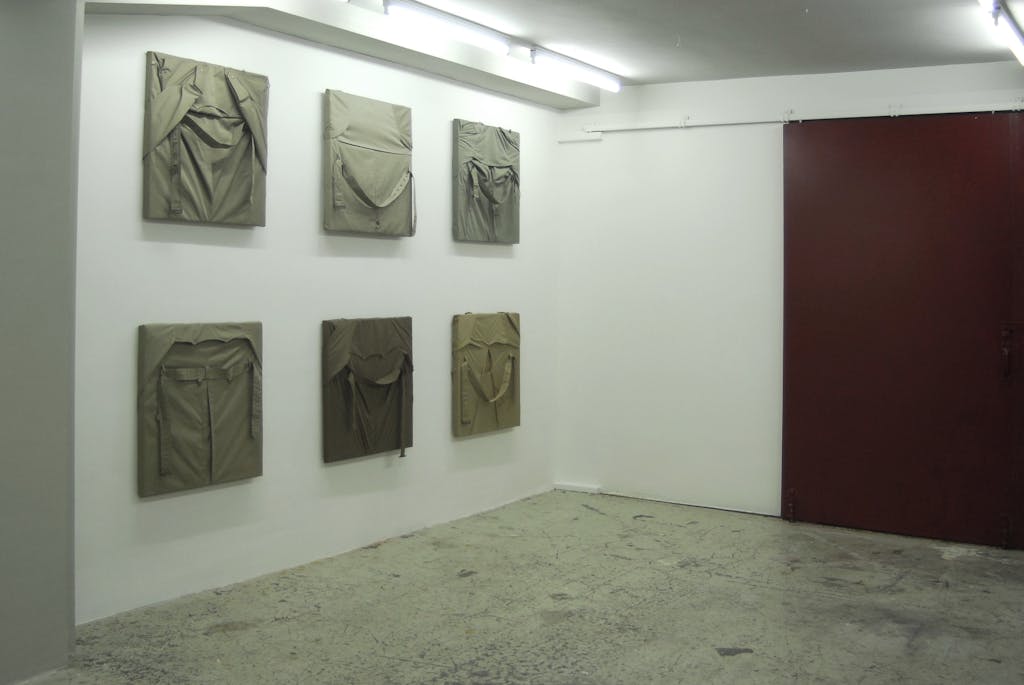 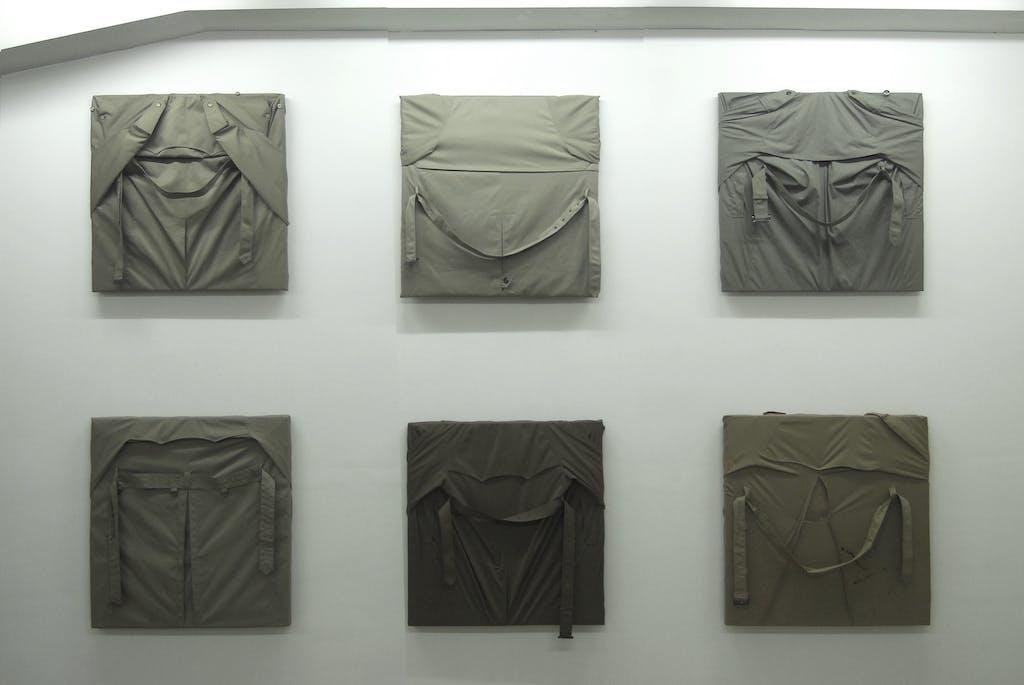 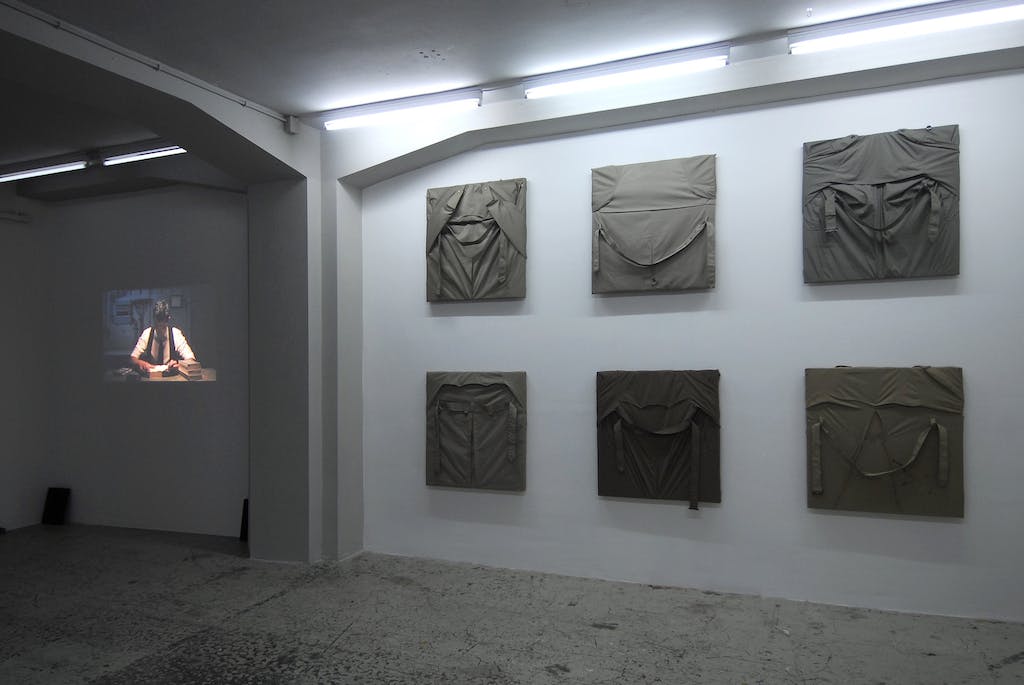 In a world where everything looks the same, it ain’t easy making monochromes…

What are the war cries of Neo-Formalism? Are there any? Or are its fighters and agents doggedly anti-dogmatic?

Portnoy’s THRILLOCHROMES imagines a subterranean world where such overblown directives (Dismantle… ! Infiltrate… !) are the scores for a collection of trench-coated operatives in a series of abstract thriller films which lead to the creation of excruciatingly beige monochromes. The work consists of six monochromes and six corresponding short films playing on tropes of TV procedurals and espionage films.

The six short films were shot in the WWII bunkers beneath Gare de l’Est. The series continues Portnoy’s recent interest in “improving”, in the manner of an engineer/futurologist, recent dead-ends of contemporary art making. In this case the metastasis of textural abstraction and quasi-monochromes. 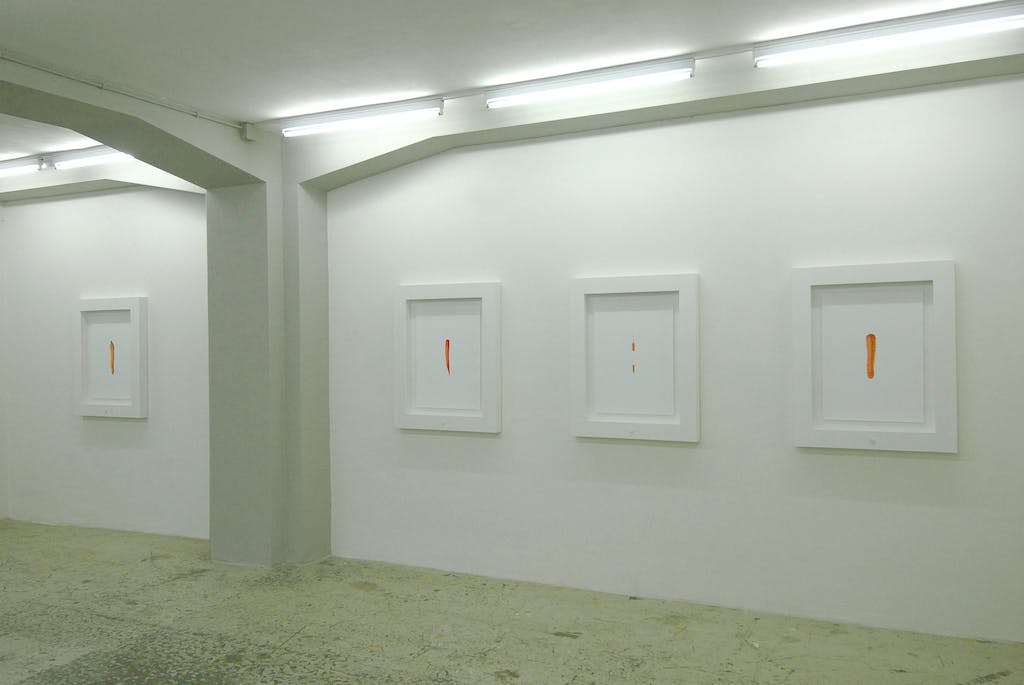 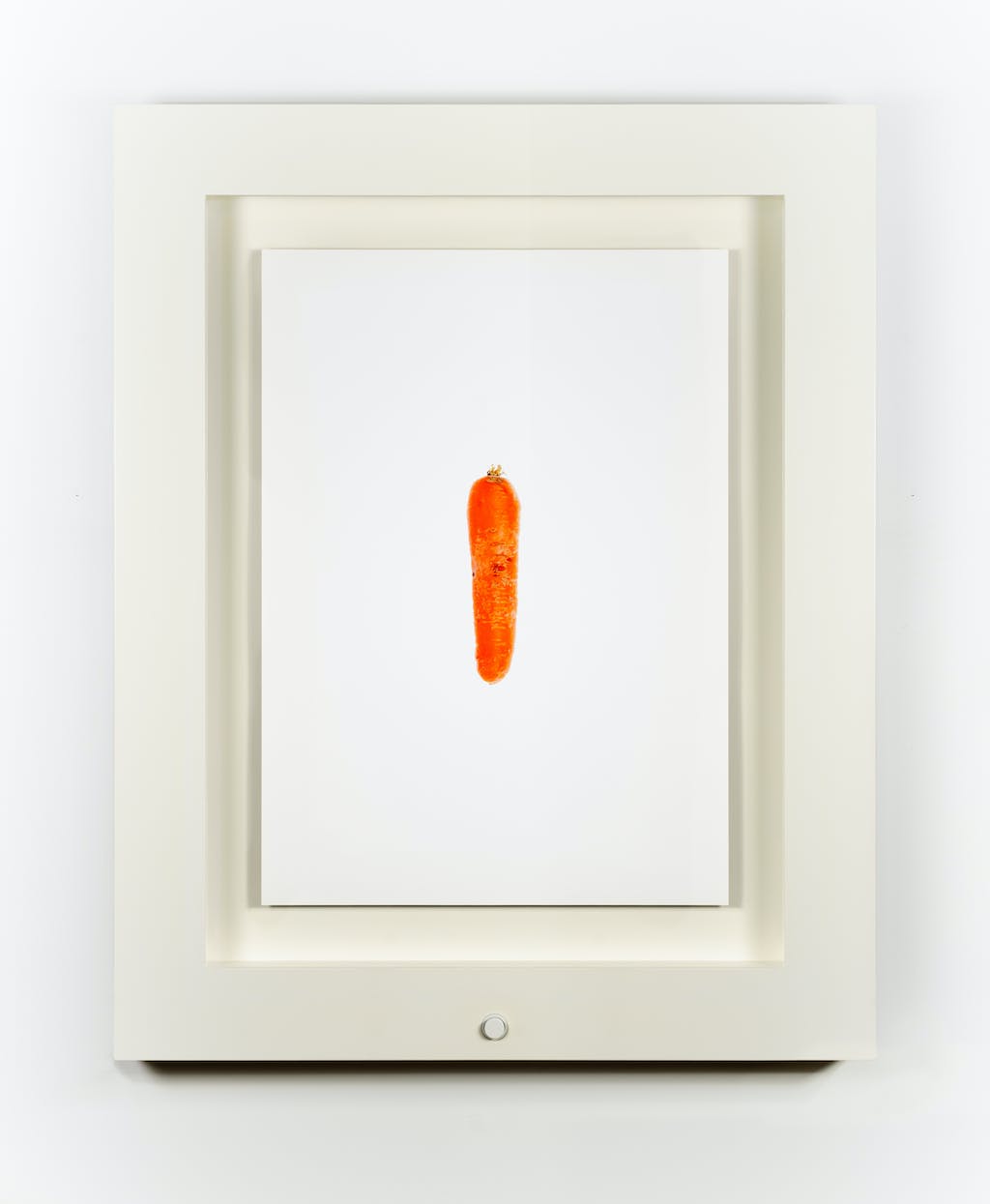 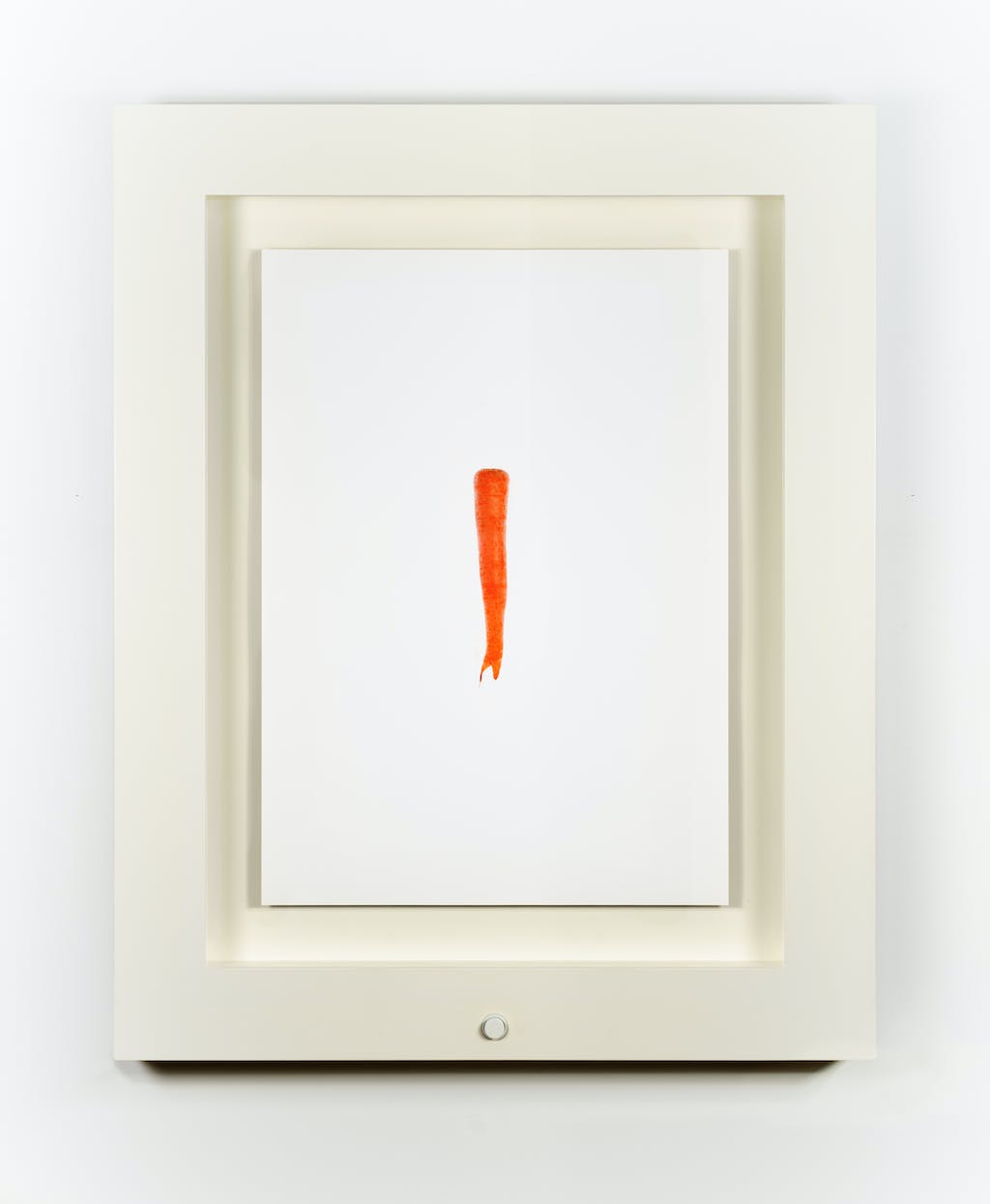 Continuing his interest in “experimental comedy”, Michael Portnoy introduces the public to a specialized form of jokes, “carrot jokes”, through a series of interactive wall-based works.

His recent exploration of this genre was first proposed by cognitive linguists Chlopicki and Petray (1981). One of the primary features of these jokes is that their background has essentially occluded the foreground, i.e. all of the establishing features of the situation of a joke (setting, character, theme, style, etc.) have overcrowded the “room”, leaving little space for the narrative to nudge through. In the wall-based pieces, various carrot jokes are depicted through an audio recording of Portnoy reciting or discussing these convoluted texts.

Andrea Éva Győri studied at Hungarian University of Fine Arts in Budapest and at Staatliche Akademie der Bildenden Künste, Stuttgart (DE). She was artist in residence at the Jan Van Eyck in Maastricht (NL) and winner of the Esterházy Art Award 2020 (HU).

Győri’s ongoing fascination with the interaction of the body and the psyche, is expressed in bold works depicting affective sexual relationships. Citing Huib Haije van der Werf, ‘She had always been curious of the body and its interconnectivity. To its own nerves and feelings. Its capacity to generate affect. Instigate difference. How these could be read in its movements.’

In Andrea Éva Győri’s recent paintings and drawings we see little red creatures, sticking fingers and tongues in genitals, touching and licking each other with closed eyes. Instead of an observer, as in her earlier drawings, the artist is the main instigator, creating a personal fantasy, little devils who won’t let loose of each other and demonizing a larger body. In some drawings the body is replaced by a bald head, eyes open, tongue sticking out. The creatures are on a sexual expedition, a hilarious procession discovering and exploring the body. An abstract ‘eye’ is part of the same being and watching. These obsessively drawn up sketches form together a visual diary. 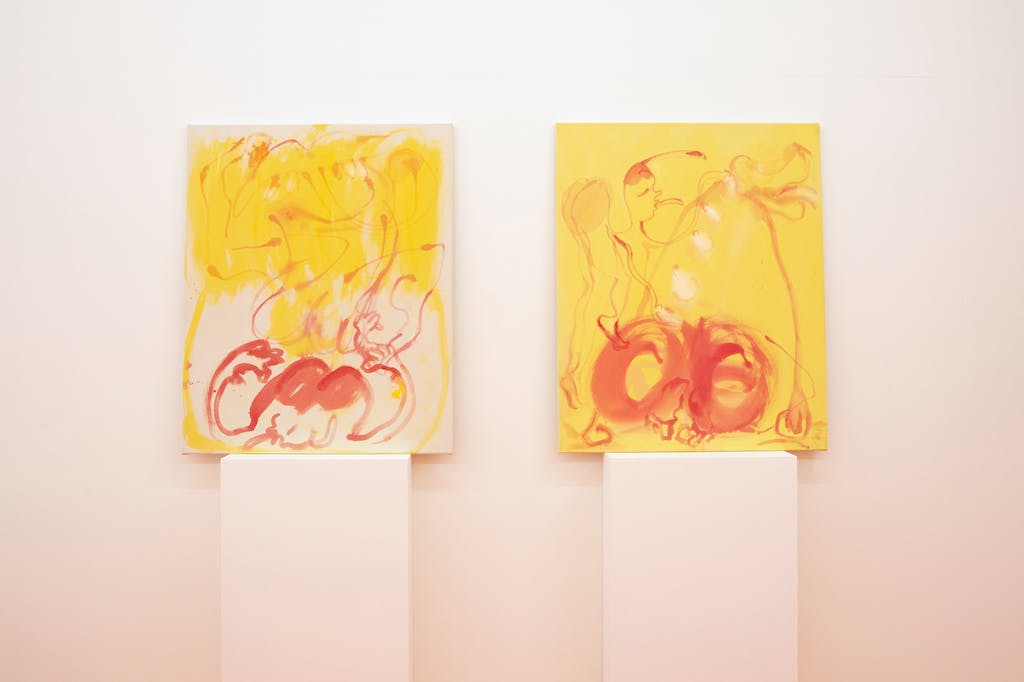 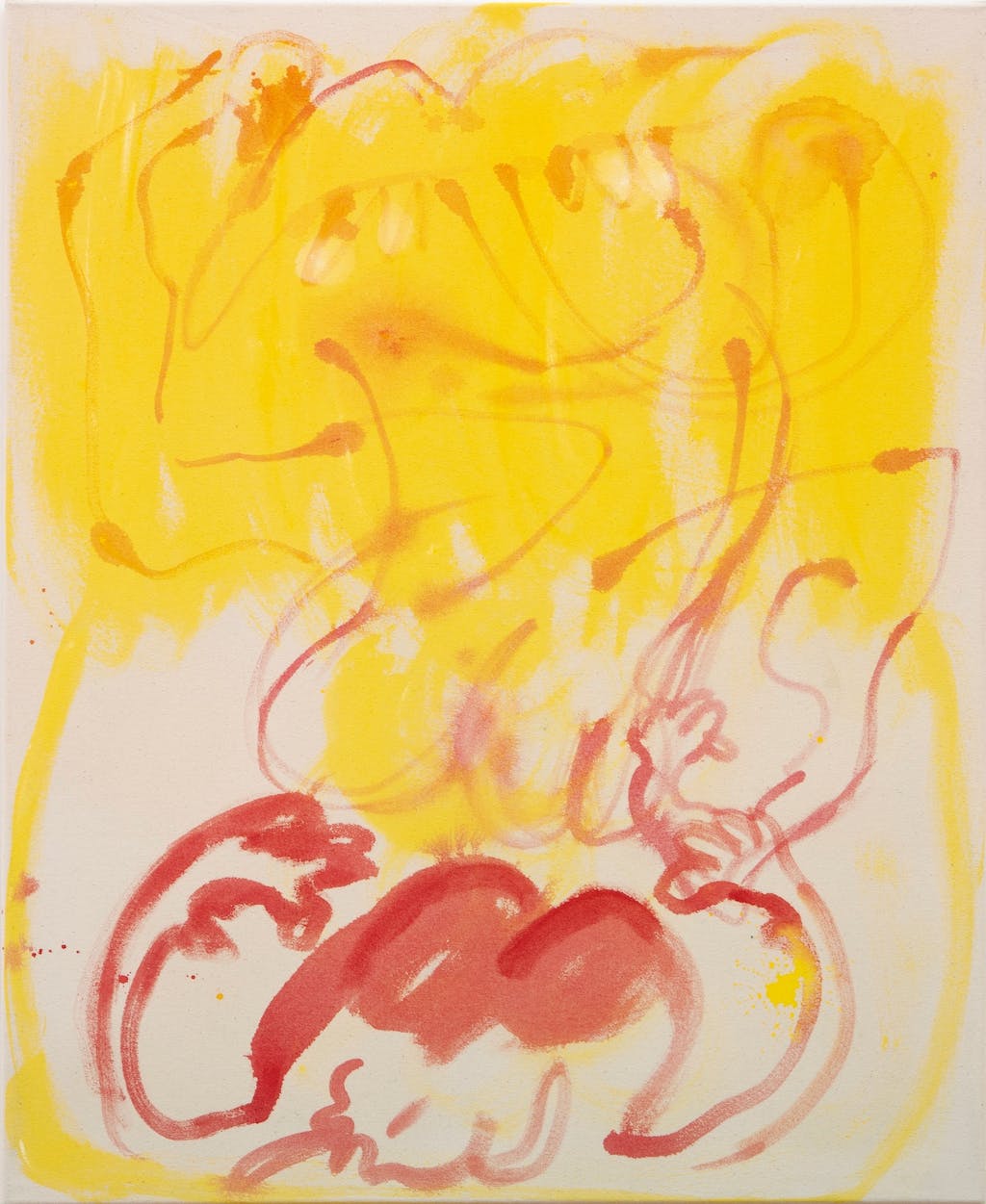 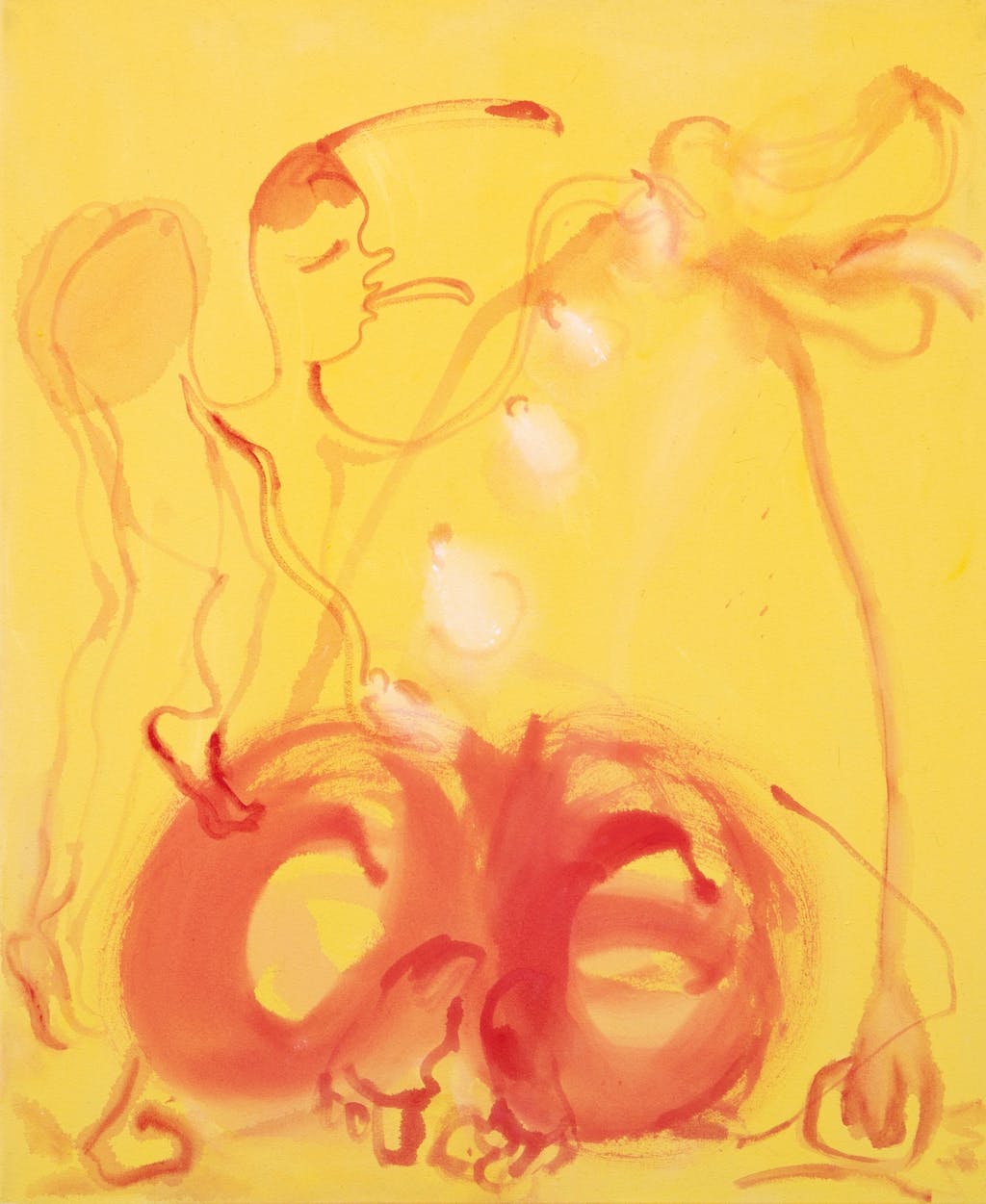 […] A palette of juicy yellows, reds, oranges, and blues is tempered by the crisp, clinical light of a neon ceiling fixture. Licking, rather than penetration, dominates the sexual fantasies represented in the energetic paintings that line the gallery’s only room. In Licking Expedition, Burning Tongue Issue, Evil Tongue Mechanism, and Lick your Finger After (all works 2019) identical humanoids play with themselves and each other, causing peachy paint to ebb, flow, and puddle in rouged erogenous heads, bottoms, labia, and fingertips.

The exhibition’s tidy, formal arrangement contrasts with the lustful chaos of licking tongues, probing fingertips, and splayed legs running rampant in the works. This disjunct calls attention to a mind-body dualism Győri questions in her ongoing research into the mind’s role in orgasm. Győri has immersed herself in an entangled libidinal economy of desire, pleasure, and commerce, setting herself in the company of predecessors Carol Rama, Judith Bernstein, and Dorothea Iannone. The fact that this economy turns on power is made explicit in captions penciled on some of Győri’s loose and expressive drawings, as in the series of works all individually titled Lick Your Finger After, which illustrates a trio of bald (bold) red humanoid figures coming together with frenzied hands and tongues. “AAAAAAAAHHHHH,” moans a caption, while another commands “Don’t move baby, lick yourself!!!” 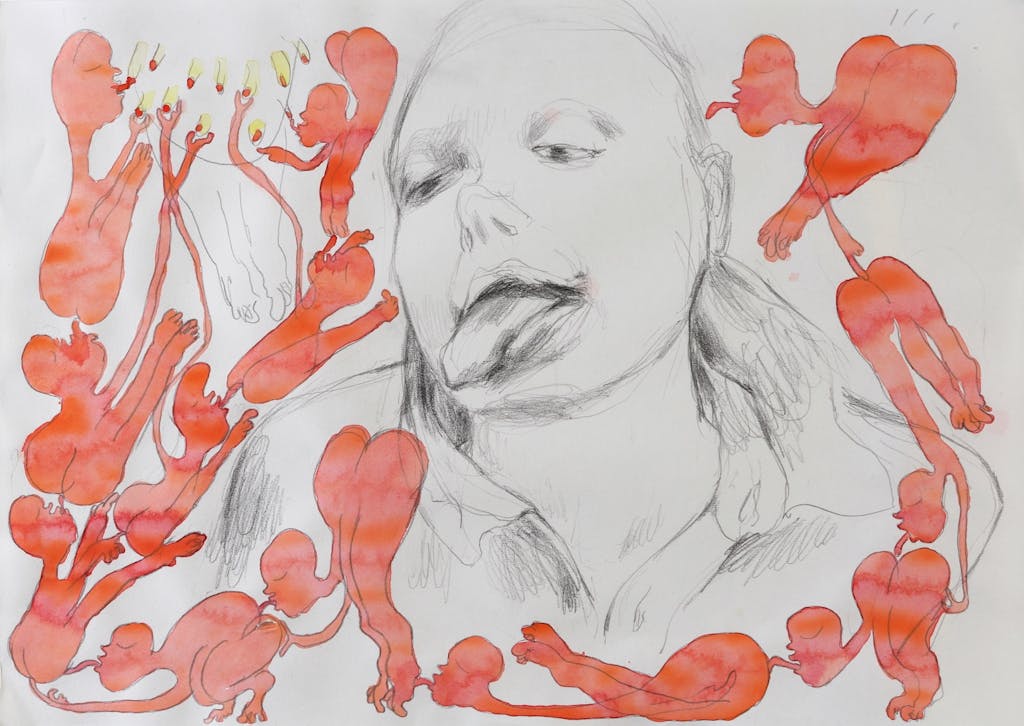 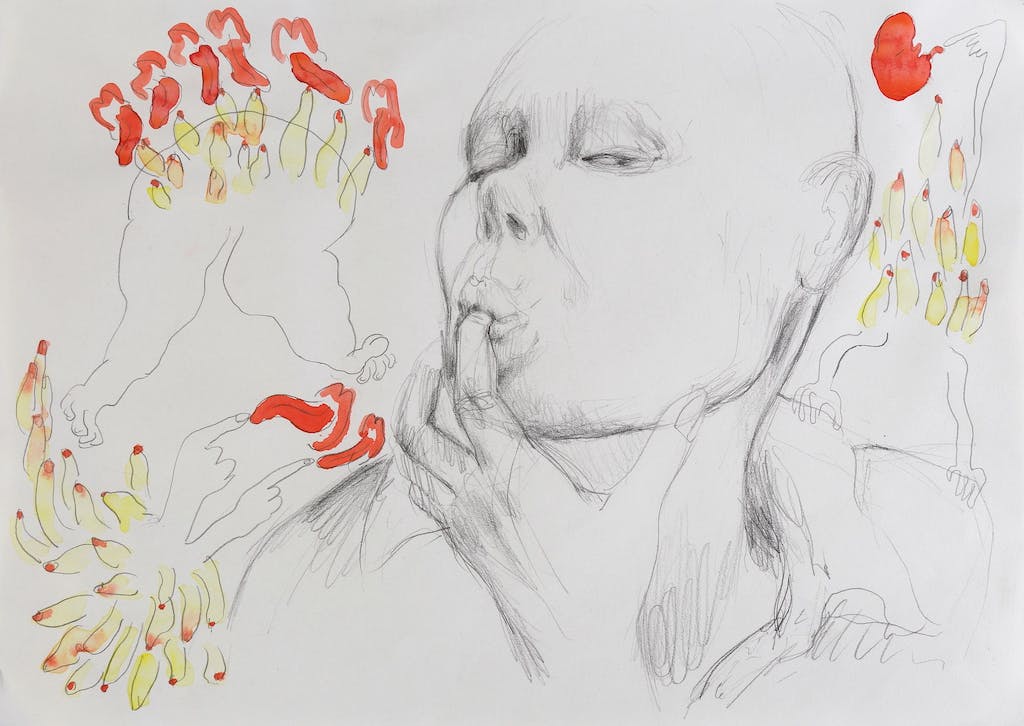 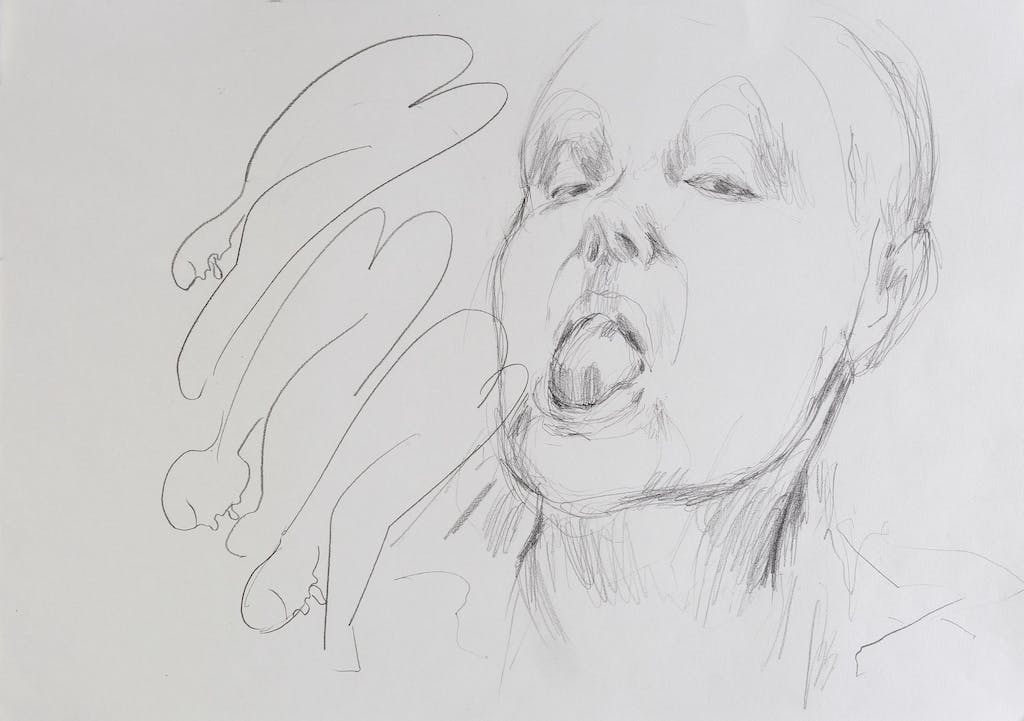