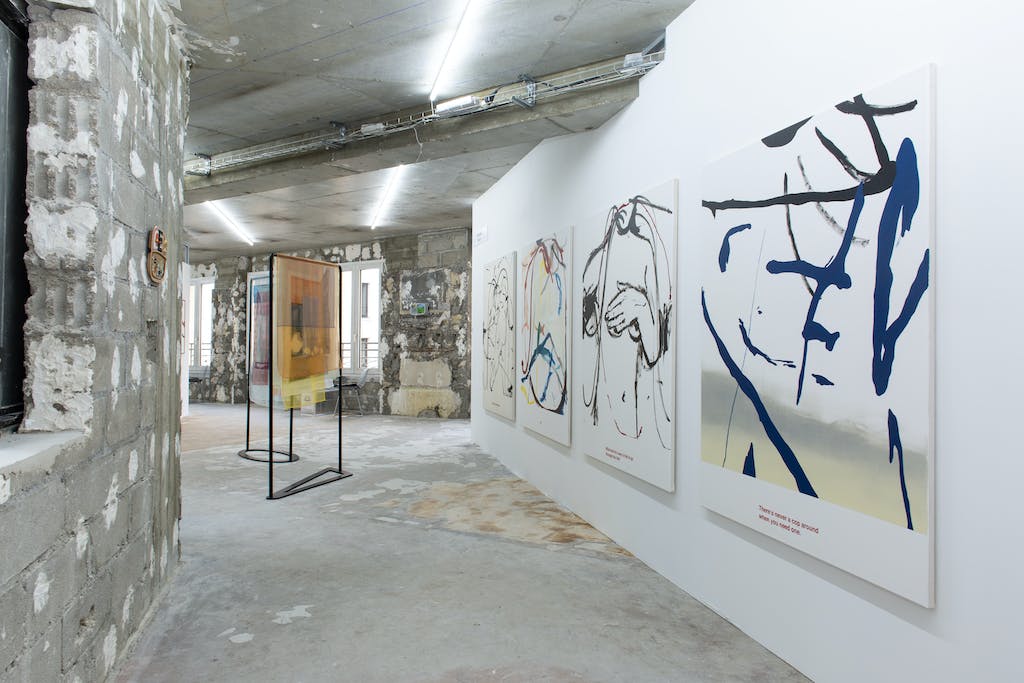 Sperling is a Munich based gallery for contemporary art and was founded by Johannes Sperling in 2014. Originally conceived as a project space, Sperling started representing artists in 2016. The gallery program focuses on new tendencies in contemporary art, alternating solo exhibitions with conceptually motivated group exhibitions and projects. The 7 international artists represented by Sperling share an interest in interdisciplinary, concept-orientated and space-based approaches as well as an engagement with social, political and/or cultural realities. 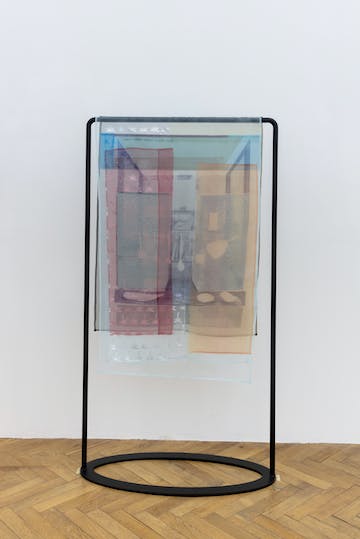 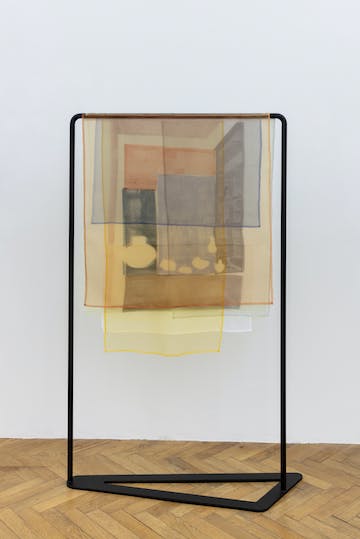 Transparencies, 2020-2022, arises from Ana Navas’s interest in the narratives spurred from ethnographic objects and how they are displayed. The series takes photographic records of displays from now-disappeared museums – for example, the Musée de l’Homme and the Musée Ethnographique du Trocadéro in Paris– where objects deemed «exotic» were sheltered in vitrines, following museum models with a scientific approach. These mise-en-scènes, a visual language that constrains the objects within a specific ideology, are meticulously disarticulated by the artist: She deconstructs the photographs into layers and depicts each one of them in translucent fabrics placed over metallic racks and rods. Although these ways of representing the world are now defunct, or have simply been replaced by new trends, is it possible to proclaim the extinction of such gaze? 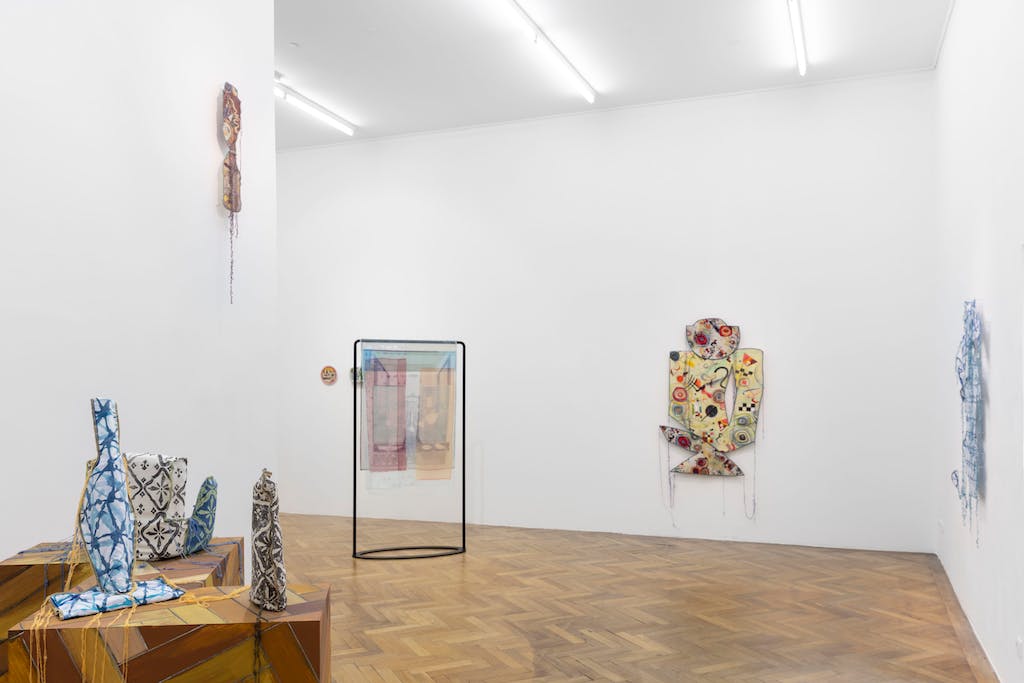 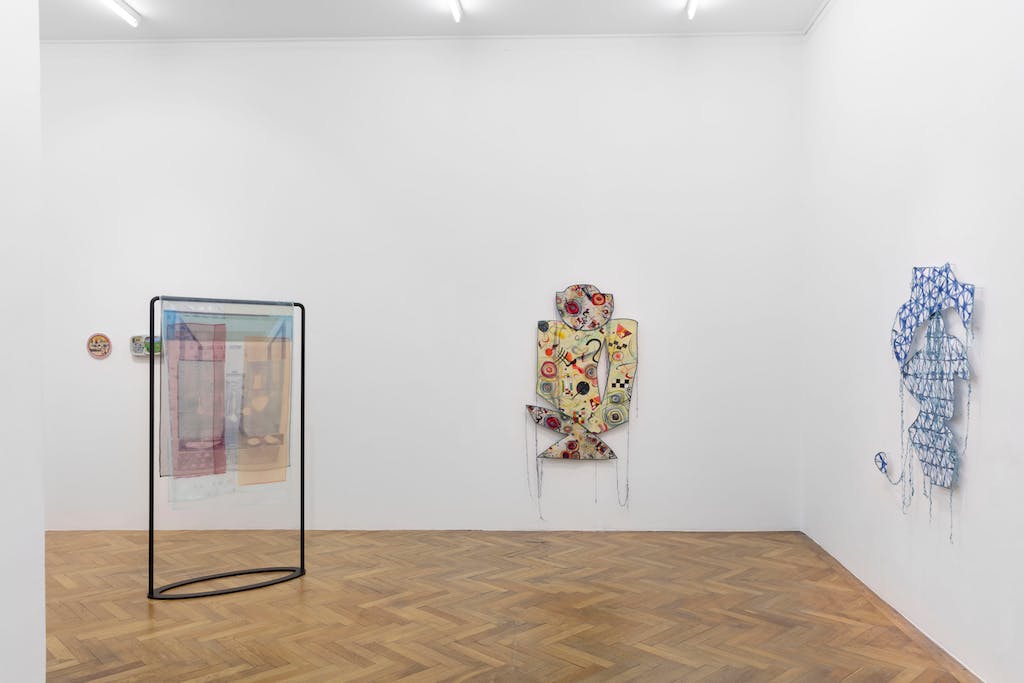 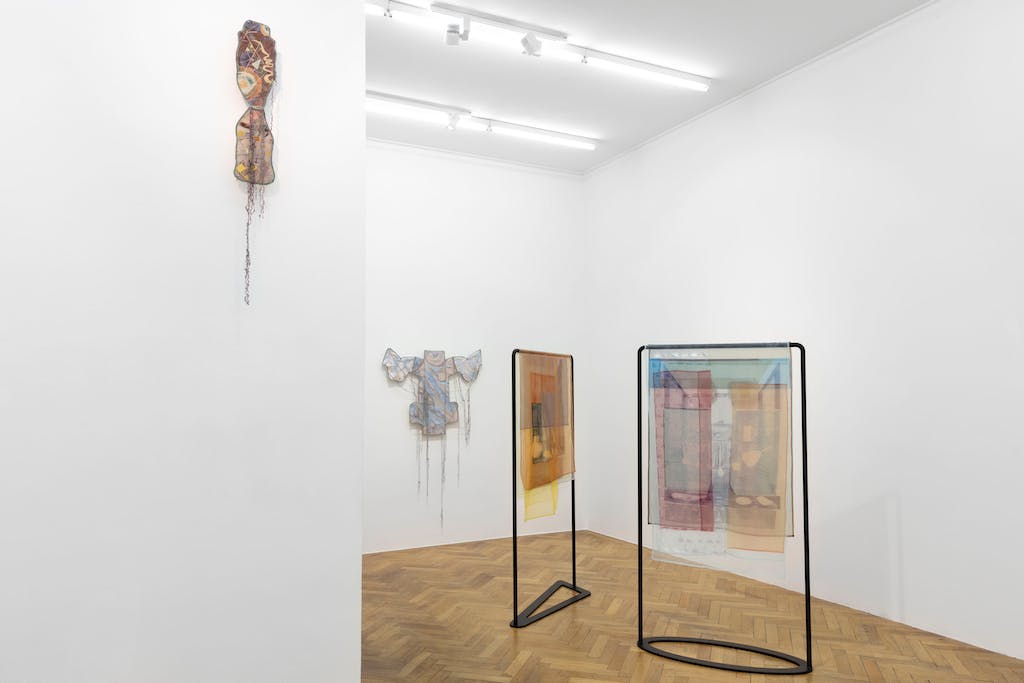 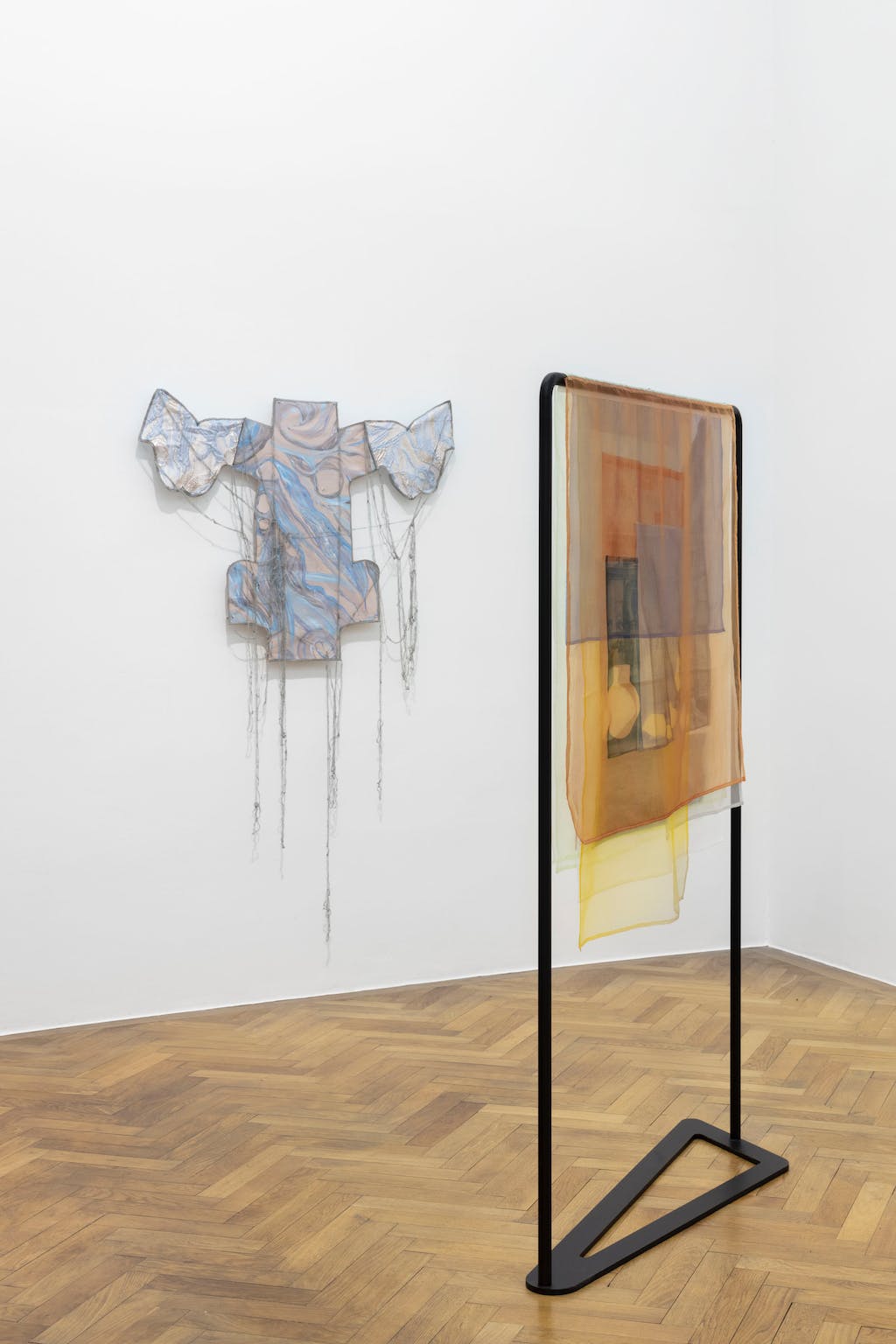 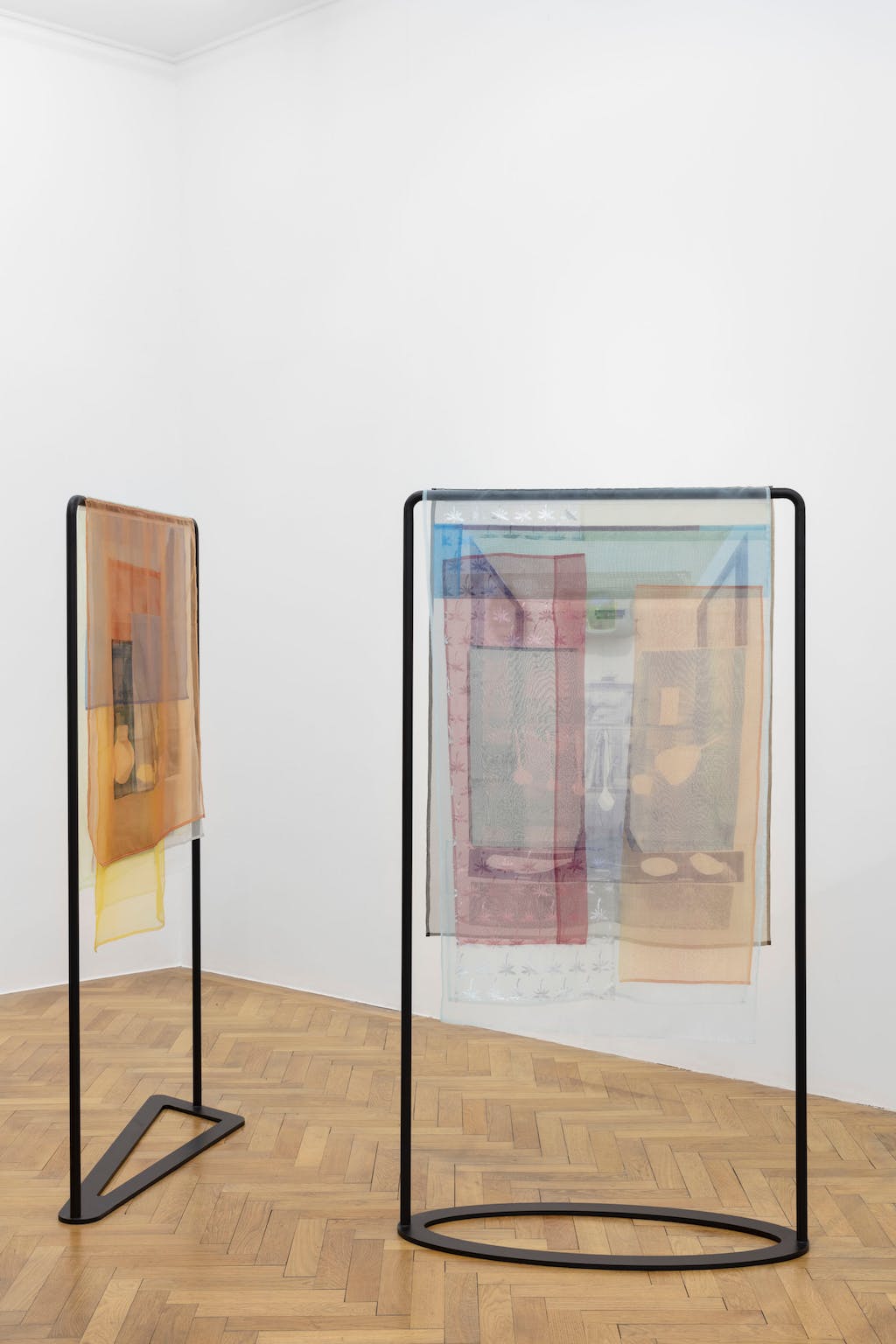 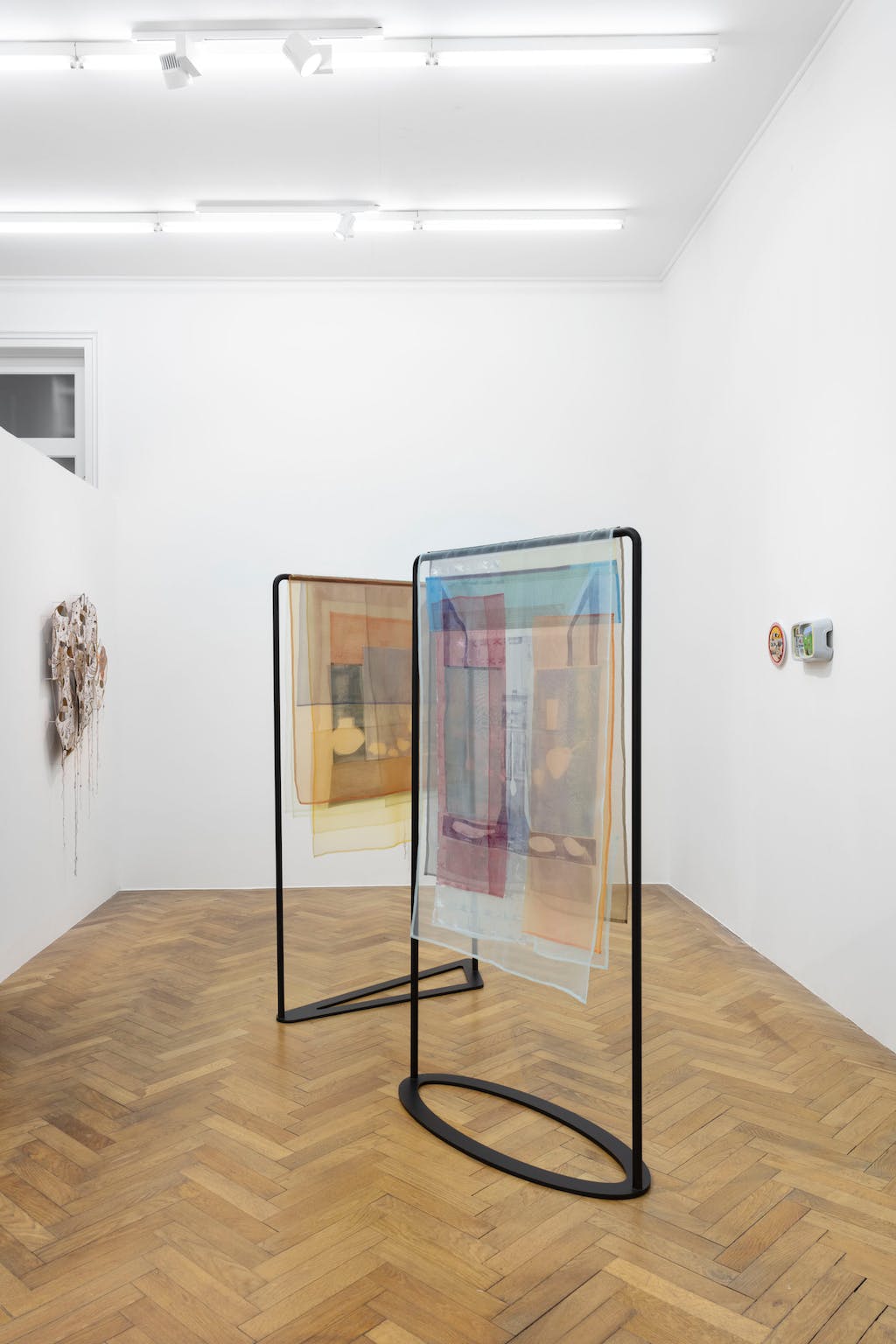 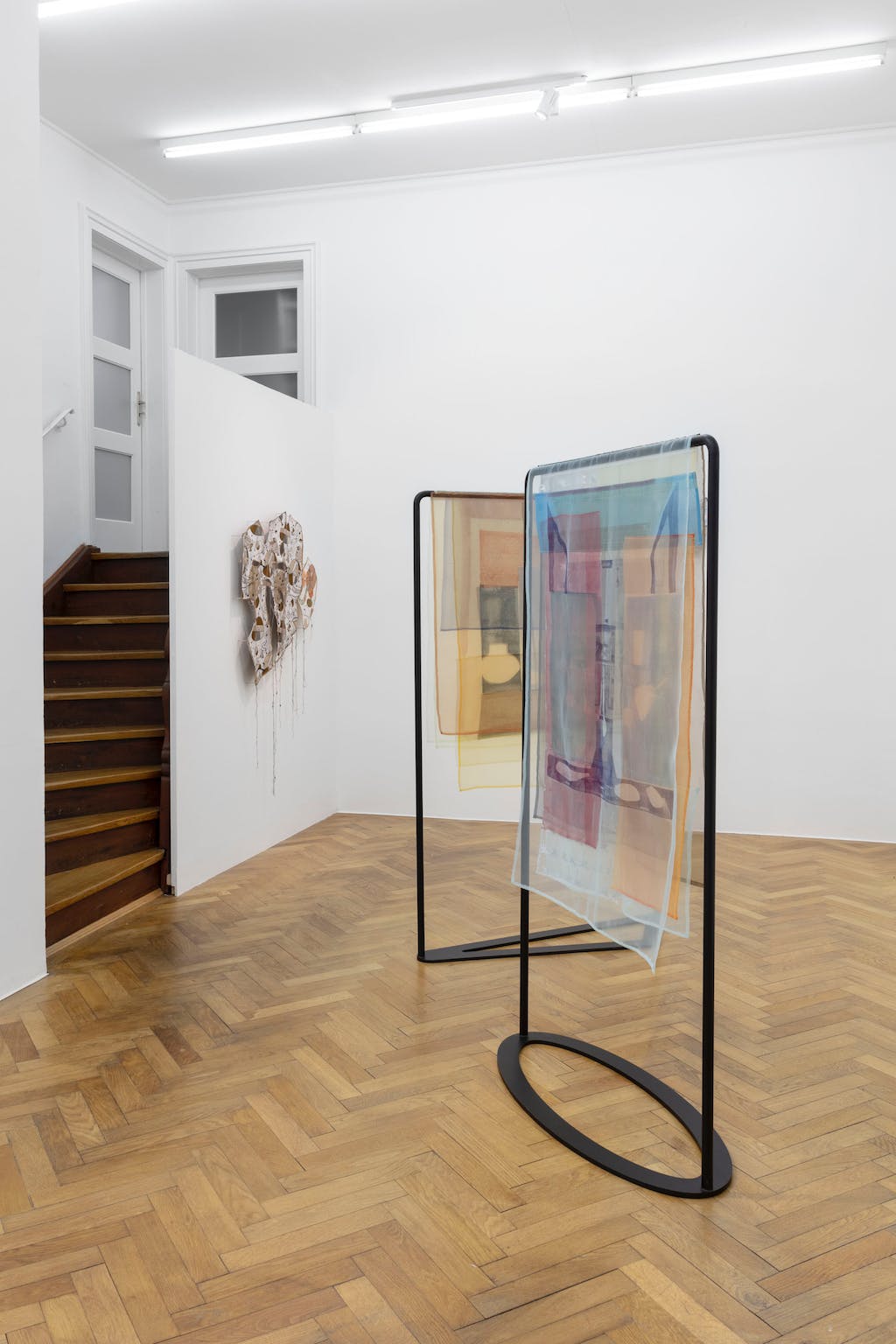 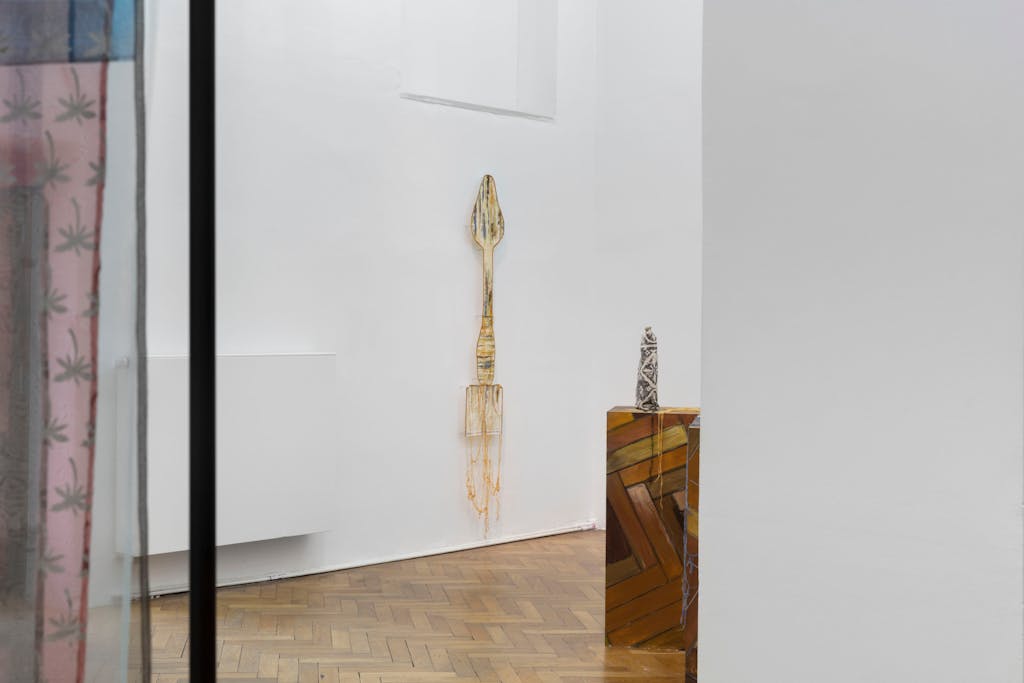 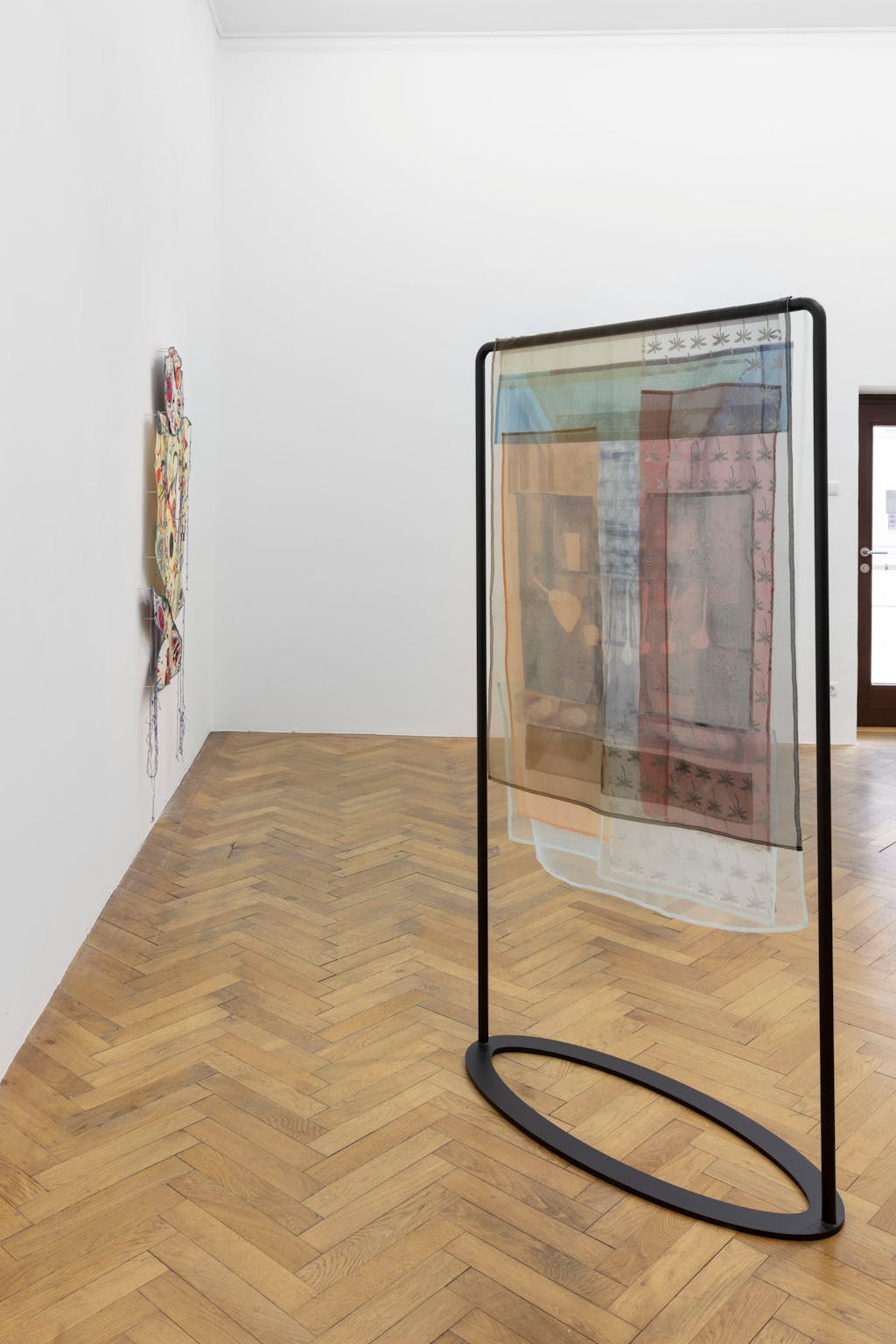 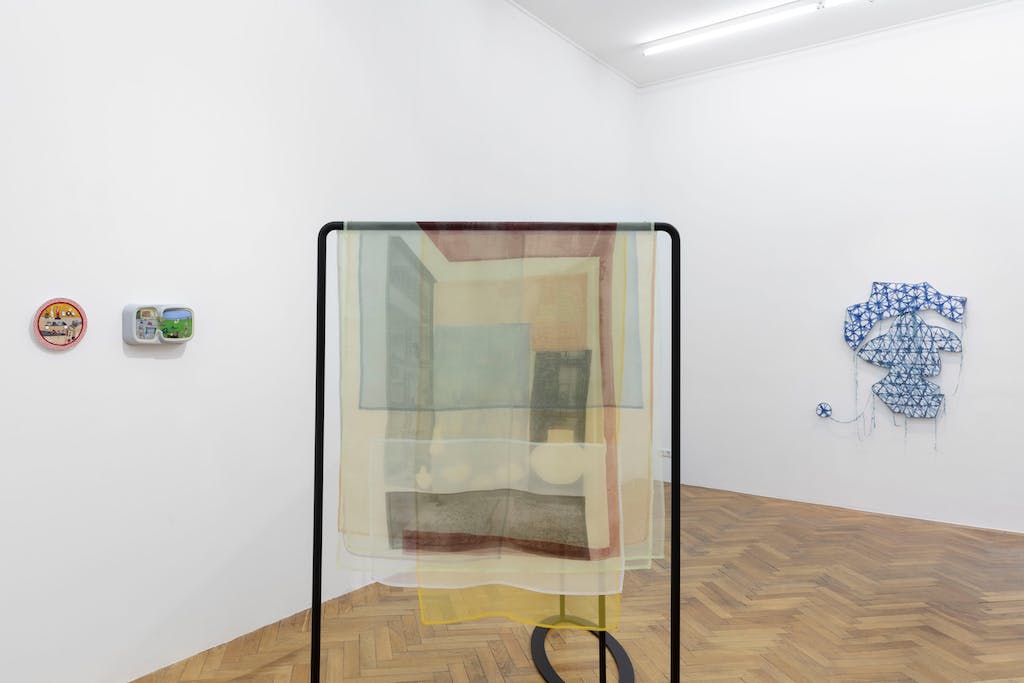 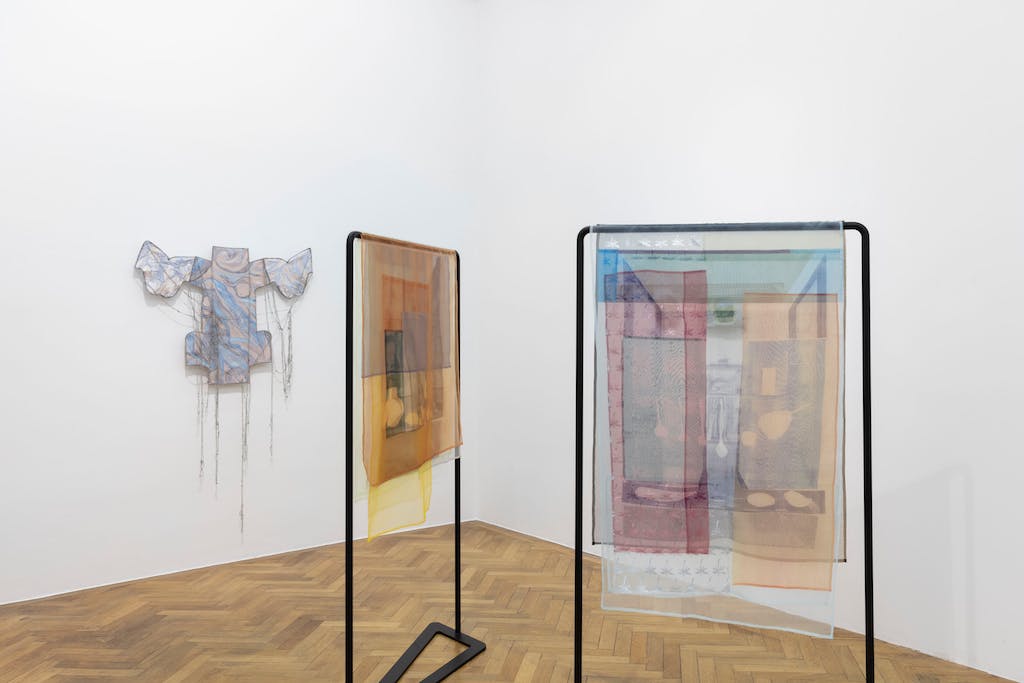 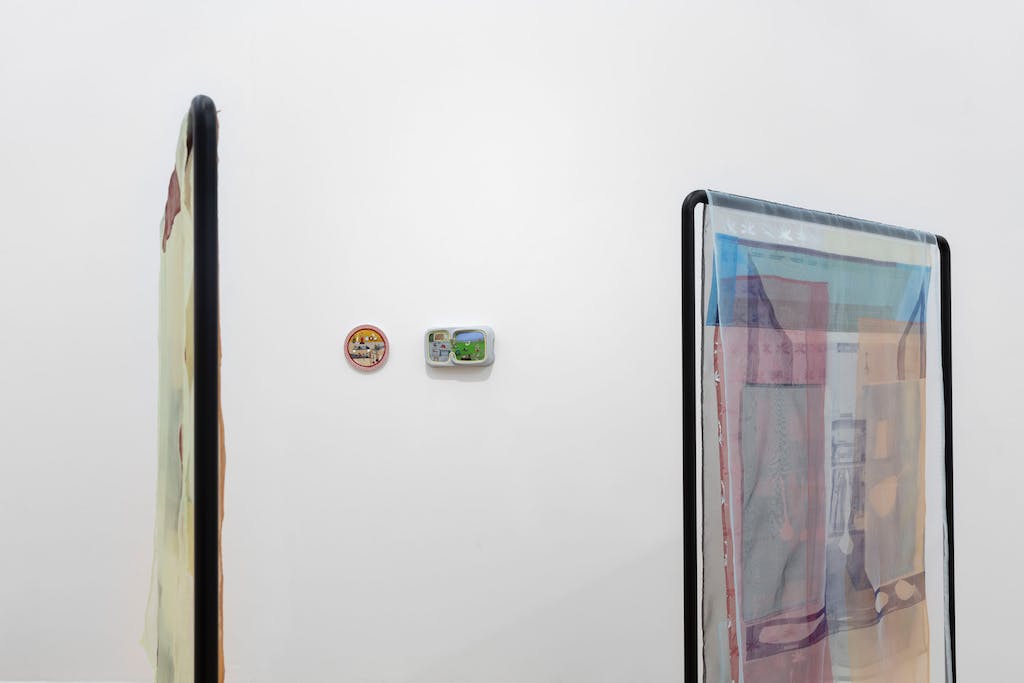 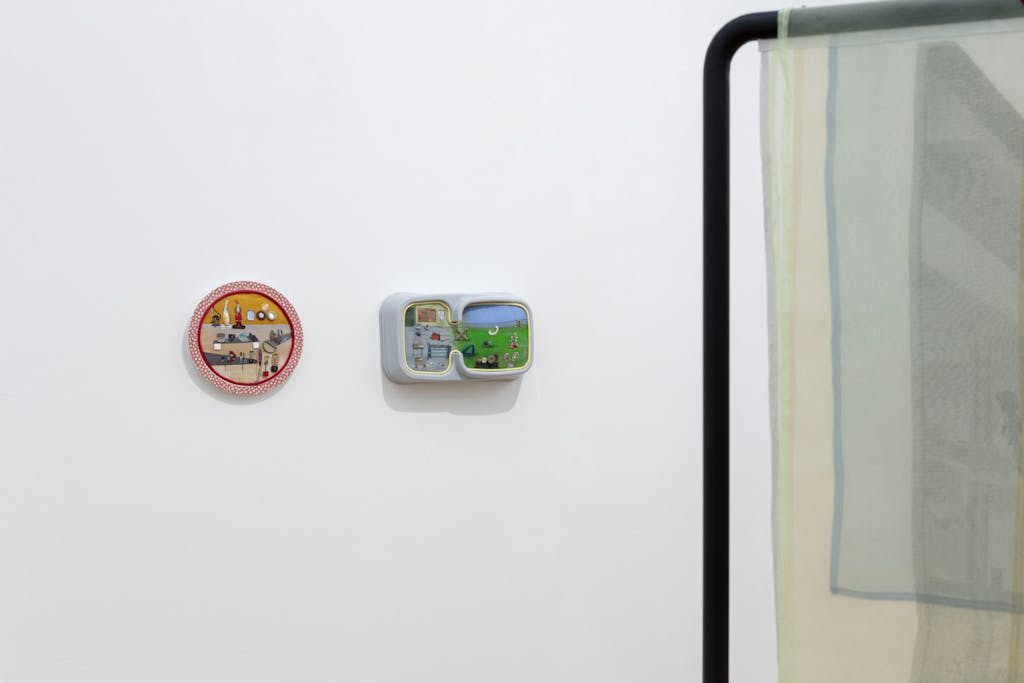 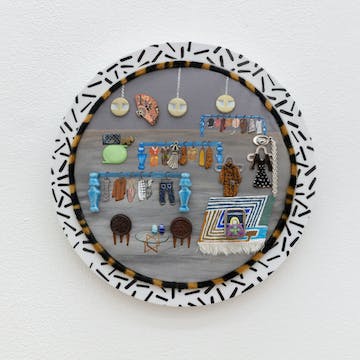 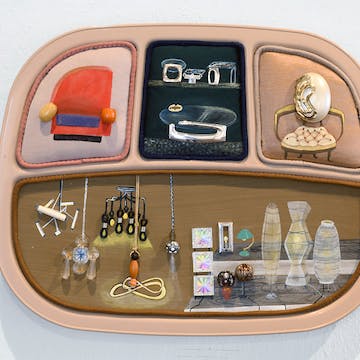 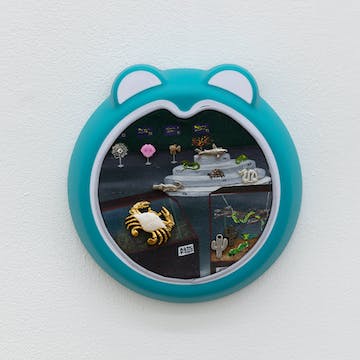 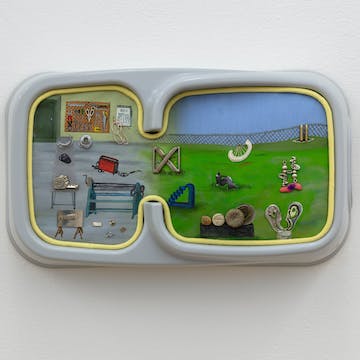 I started the series [of plates] in 2019 at the residency program Charco-Granero in León Guanajuato [Mex], where a lot of raw material is sold for the manufacture of footwear and bags. I used a large part of textiles and vinyl for the residency’s main body of work (which were costumes for objects). There is also a large part of the industry in León dedicated to making accessories, buckles, bijouterie and decoration material. I am mentioning this because in the plates I am careful of not using pre-done small objects like the ones for architecture models. I rather want to provide those tiny fragments, decorative pieces or even small waste material from the industry a new meaning by arranging them for a new scene. The first plates that accompanied the costumes for objects served to reveal some references present in the costumes. One of the first plates, for example, was titled “My favorite female artists”, where I used rectangular gears for bags or belts as frames for paintings by Lee Lozano, Eva Hesse, Louise Bourgeois or Agnes Martin. Another one, referring to the notion of monument, was titled “Lo que me acuerdo de la mitad del mundo” remembering a monument dedicated to latitude 0 in my native Quito-Ecuador. A third one from that time made reference to my interest in potential meeting points between ‘high’ and popular culture on a plate which combined bracelets woven with names with text transformed into an “Eva Hesse TQM, Selena, a ti también”. For the final exhibition in León (Ana Navas & Kiko Pérez, “Sumas y Restas. Es más fácil saber cómo se hace una cosa que hacerla”, Instituto Cultural de León) the plates served as a kind of footnote. I liked the experience of being able to see in the foreground a sculpture in relation to furniture, appliances and therefore proportions close to the body (as in the case of the costumes for objects) and then approach the miniatures on the plates, like a zoom out / zoom in movement for the visitor.

From that first presentation, I liked and kept the idea of ​​the plates as a format to share my references and inspiring scenes; precisely as the franchises we were talking about, but also forms of displays, sculptures’ and children’s parks, souvenir shops, museums and, in general, different ways to understand and order objects. Sometimes, when having the opportunity to do a talk on my artistic work, I share a section of photos from my personal archive, hoping people can read some of my interests between that conglomerate of images. I think of the plates in a similar way now: they are an index of the scenes that inspire me. And I confess the isolation of the pandemic has also done its thing in finding concentration and pleasure in carefully painting well-known scenes from the outside world.

Sperling is pleased to introduce two artists to Paris Internationale whose work is both about personal experience and collective memory. Ana Navas (1984 in Quito, Ecuador) and Malte Zenses (1987 in Solingen, Germany) connect fragments from our everyday lives to the history of art and design. Ana Navas shows two sculptures from the series Transparencies, using both a historical and a fictional approach to raise questions about the genealogy of objects. She explores the relationship between ‘high’ and ‘popular’ culture in the context of different forms of display. New paintings by Malte Zenses combine quotes from the 1971 American post-apocalyptic action film The Ωmega Man, starring Charlton Heston, with recycled sketches from his personal archive. With ironic nonchalance he expands the vocabulary of abstract painting and new realism by pointedly integrating the zeitgeist of his generation through autobiographical fragments. 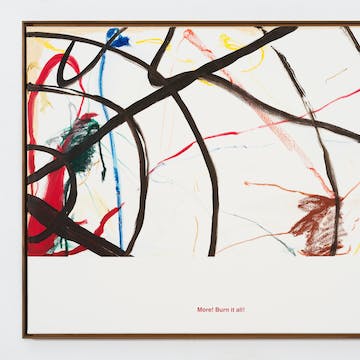 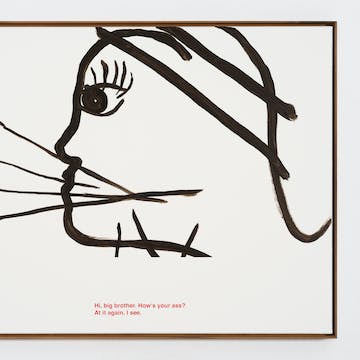 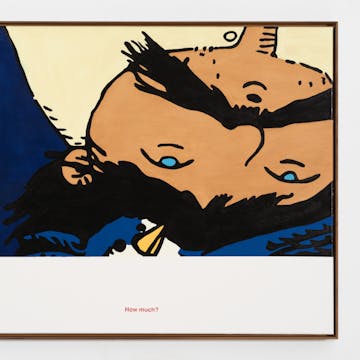 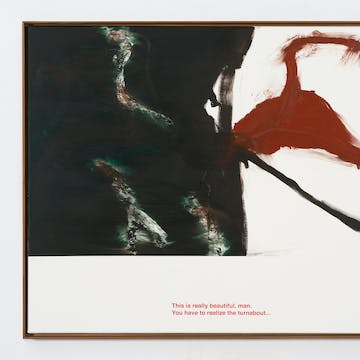 Malte Zenses
This is really beautiful, man. You have to realize the turnabout…, 2022

My new series of paintings draw from the vocabulary of Abstract Painting and New Realism and integrate fragments from everyday life such as notes, tags, or Comic book imagery. This cross-media approach allows me to view the works as set pieces of a conversation that only in their juxtaposition communicate a multi-layered commentary on the current zeitgeist. In doing so, the lettering, signs, and symbols are used as ciphers that mark a realm beyond the visible and allude to a sense of disillusionment. It is a disillusionment that stems from the realization that the collapse of the world – in the form of the pandemic, resource scarcity, and global warming – is a man-made consequence. Underlying this preoccupation is also an ambivalent fascination with a turn of time in which the terrible and the radiant coexist.
The text fragments are taken from the film “The Omega Man,” a 1971 U.S. literary adaptation by Boris Sagal. It is based on the science fiction novel “I am Legend” by the American writer Richard Matheson.
Most of the quotes are fragments of the protagonist Robert Neville’s soliloquies. 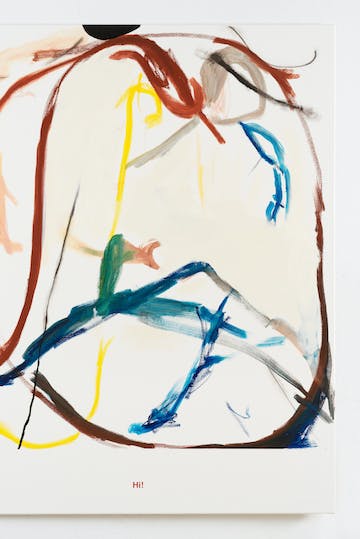 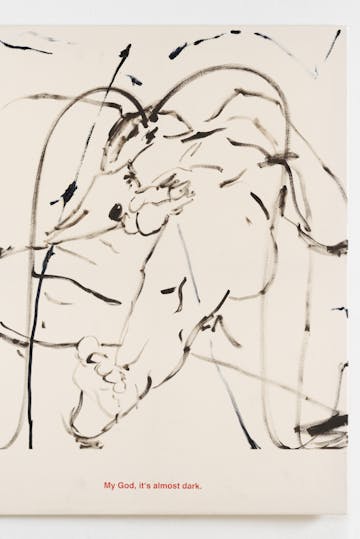 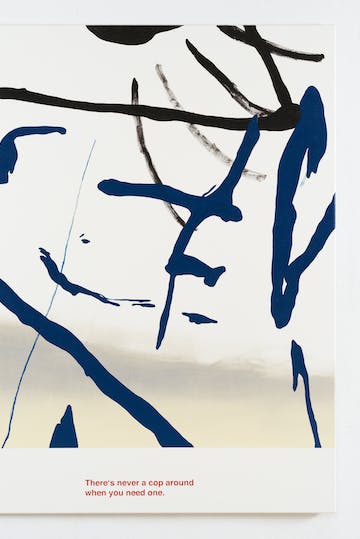 Malte Zenses
There’s never a cop around when you need one., 2022 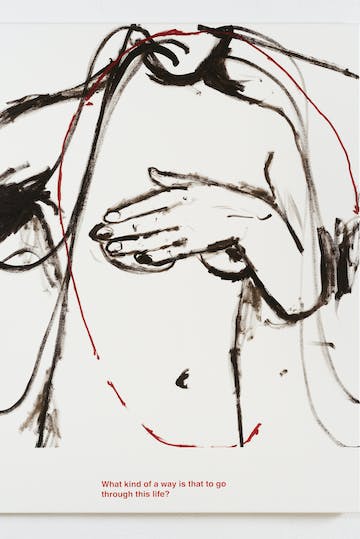 Malte Zenses
What kind of a way is that to go through this life, 2022 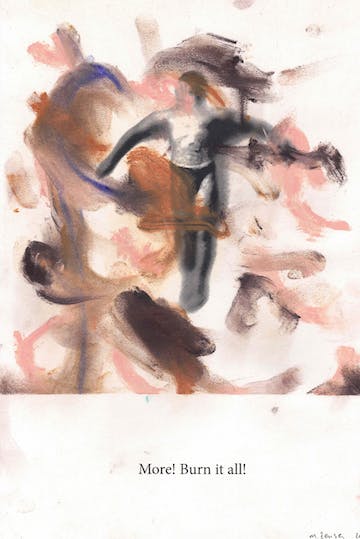